Posted by William A. Jacobson Thursday, September 12, 2013 at 07:00am 7 Comments
More Sharing Options

Greetings again from northern Idaho!  I’m sending you here a picture of the back of a truck that I took a few weeks ago in a parking lot in Sandpoint, Idaho.  If you ever get the chance, this area of the country is gorgeous, and I highly recommend seeing it.  My family has lived here for about a year, and coming from Chicago, it certainly is a breath of fresh air, literally and figuratively.

I’ve been meaning to send you this for awhile, but life has been crazy here.  However, since one of the bumper stickers mentioned 9/11, I wanted to send it out.  Regardless if you publish it or not, there are a huge amount of people who, like you, will not forget….

And so, although in many ways this will be kind of a normal day, I do have to mention one more thing.  My kids are 3 and 2, and this morning, my 3-year-old, as she normally does, went to her drawer to pick out clothes for the day.  She knows nothing about 9/11, but she pulled out her US flag shirt.  I asked her if mommy should wear her flag shirt too, and she said yes, today should be a flag shirt day.  🙂

I hope you and yours are well, and I wish you the best from across the country. 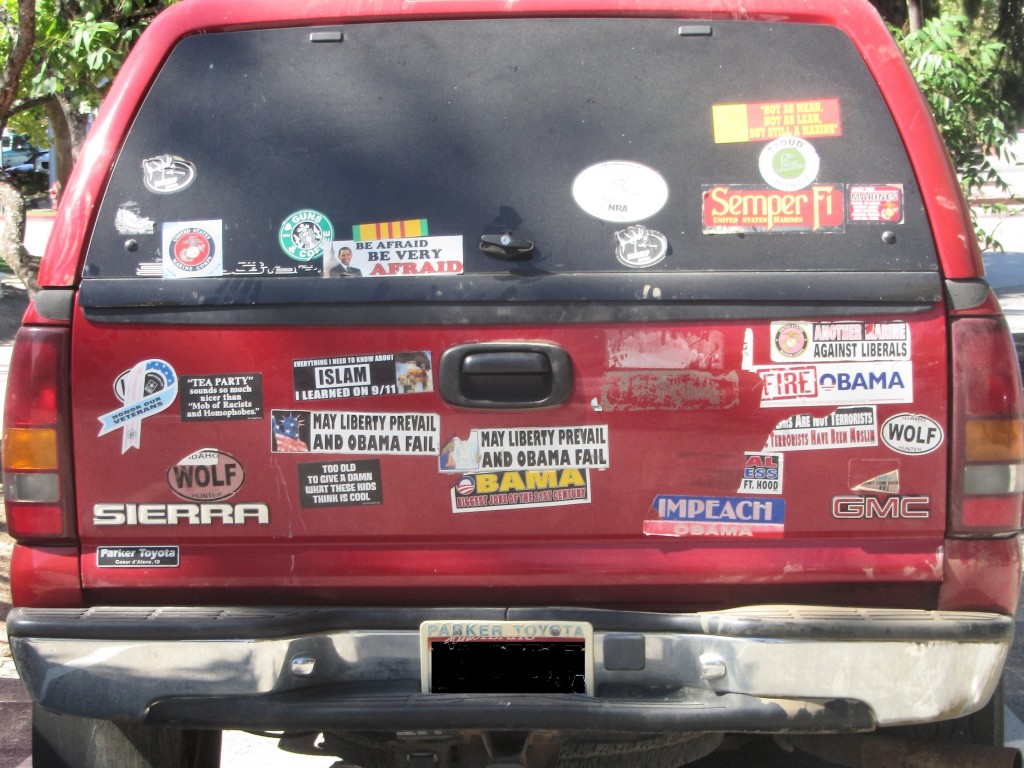 The tea party sticker doesn’t make sense on that bumper.

Sitting 80 miles up river from Sandpoint right now, and will probably drive in there to the neraest Wal-Mart tomorrow (unless I decide to venture down to Costco in Coeur d’Alene). Its a gorgeous lake, but you don’t really appreciate it as much at the northern end in Sandpoint. Rather, the south end, by Bayview, is even better. Bayview, BTW, is the site of Idaho’s only Navy base – they do sonar research there because the lake (Pend O’Reille) is deep and seismically quiet – so deep that the lake doesn’t freeze. I have been told that the depth was caused by glaciers, and this might make sense – Sandpoint is essentially the place where a glacier from Canada would move down, plug the outlet (into Pend O’Reille) of the Clark Fork river to form glacial Lake Missoula, maybe half the volume of Lake Michigan. Where I am sitting right now would periodically have been better than 1,000 feet deep at that time. Then, things would warm a bit, the water from the glacial lake would eat through the ice dam, and it would break, emptying in a day or two, wiping out much of SE WA and NE OR. (taking a short cut to connect up with the Columbia).

A couple of other things to keep in mind about this part of the country. Sandpoint is maybe 20 miles south of Ruby Ridge, where Randy Weaver, the ATF, and the FBI had a standoff a number of years ago. He was acquitted of murder by the Idaho jury, but when the FBI sharpshooter who had killed his wife was indicted for such by Idaho, the feds invoked supremecy to get him off. Moving south from Sandpoint (beyond the turnoff to Bayview) maybe 40 miles south is Hayden/Hayden Lake (and, no, it wasn’t named after me, nor, pretty sure, after an ancestor) that was home to a lot of skin heads and militias about the time that Weaver was fighting the feds on Ruby Ridge. It is now fairly upscale, and really a suburb of tony Coeur d’Alene, which has a nice lake, but, not nearly as nice, in my view, as Pend Orielle, maybe 40 miles north.

Oh, and Sarah Palin was born in Sandpoint.

I bought another gun yesterday, as part of an elaborate deal that involved my selling a vehicle. It got me thinking. Guy on the other end of the transaction offered various different things, along wtih some cash – differet boats, different cars, different guns, both hand held and long. And, he wasn’t the first this summer. Rather, that seems quite common here – that everyone is cash poor and stuff rich, and routinely trade stuff around, and the stuff includes an amazing number of amazing firearms. I have been offered this summer pretty much any caliber weapon between .22 and .50, and even one that had three at once (actually, one barrel was 12 gauge, which is even bigger) All these weapons were legal, of course.

It got me thinking though about why “red” America was so focussed on guns, motorcycles, freedom, etc., and I think (and this is probably inanely obvious) that a lot of it is in reaction to the “”blue” nanny state model, where we are supposed to trust government for safety and security. But, that means that people get what they get in life by buying politicians, and not through their own hard work, and their security depends on those exact same, purchased, politicians. The people who grew up in this part of the country (and, throughout rural America) have always worked hard for what they have, which often isn’t that much Then, to compound the problem, urban voters, through the politicians they elect, have shut down much of the extractive industry that used to provide a living for many. For example, this town used to have three lumber mills. One remains, and the amount of logging allowed in the National Forests that ring the town is greatly limited – and one result is that the fire danger is much higher today, esp. for catastrophic fires – which do not effect those who live comfortably in their big cities far away demanding an end to timbering, mining, drilling, etc. Rumor is that the feds are getting ready to lock up more of the national forest west of here, towards Sandpoint, on the grounds that they now contain brown bears – which they started transplanting awhile back when they would get in trouble around people (esp. in the National Parks)

Getting back to the guns, etc. – I think that a lot of it is direct response to progressive policies and politics. Not so much that guns are needed to protect against the government, but as an indication that they don’t need the government, and can take care of themselves. Law enforcement are not seen as the first line of defense, but rather, something that can be an hour away when needed, but are important in emergencies, and will track down criminals when crimes have been committed. Not that there isn’t a pretty good relationship between law enforcement and everyone else, because there usually is. But, they have to cover a lot of country, with not that many deputies and officers.

“Condo-conservationists” are a pain. They shut down a plan to extend a road near Juneau because, get this, “People would use it”.

Back about 20 or 30 years ago, they were fussing about something they thought was endangered down south, a desert tortoise, I think. They settled for another wildlife refuge. In Alaska. As I recall, it was placed on top a glacier with a bunch of naked rock peaks stuck up in the middle of it. All that lives up there are gnats, spiders, and ice worms. But, by golly, they got another thousand acres of, something, not exactly land, set aside so humans cannot use it.

Hello from another North Idahoan – Hauser to be exact, but by way of Sandpoint which was our first landing spot. It is a different way of life here and we do have an amazing arsenal of weapons as do our neighbors, bought for the reasons you laid out. Good post!

‘Ah, not far from one of the ways to bypass US 95 through Coeur d”Alene and Hayden on my way from Spokane to Bayview or Sandpoint. Saves a bit of time, given all the traffic on 95 just north of I-90. As I indicated, I get to Bayview quite a bit, as well as Sandpoint. As for the former, got a photo today of the Navy pushing out one of their barges full of testing equipment. Subs usually go out after dark though.

Lots of Americans are aware that our country has problems. But it’s not a “party line” problem. Both parties are closed systems to outsiders. And, Washington, DC dwells in a universe of its own.

Party labels don’t work, either. Labor is aware that today’s wages can’t be forced upwards, because other people will come along and gladly claim the jobs the workers are complaining about. And, the republican party? It’s about restricting abortion. It’s about judges who sit on secret courts. It’s about our biggest companies being told to create “trap doors” and weaken their encryption so “Big Brother can spy on you.” It’s about Homeland Security not being about security. But it is a federal jobs program, for otherwise unemployable people. It’s about the loss of our Constitution, where lawyers don’t seem to care. It’s like having doctors who weren’t trained in patient care. Where getting better isn’t a motivator.

When did things begin to fall apart? 1945 wouldn’t be a bad year to pick. Who owns us? Political families. The military-industrial complex. And, Big oil.

There’s no “fix” on the horizon.