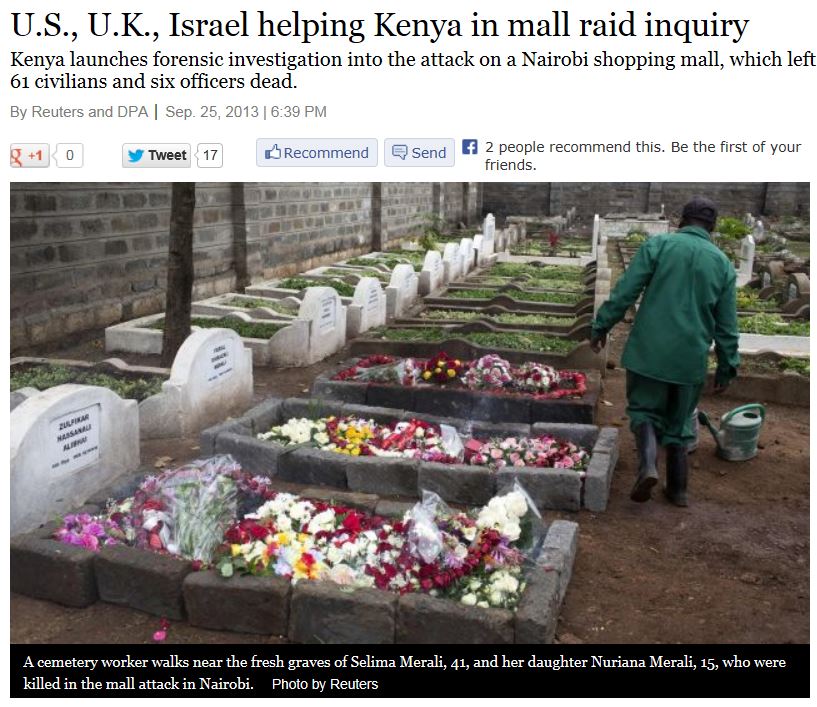 As hard as it is to believe, things still are up in the air as to the status of the Nairobi, Kenya Westgate mall attack.

Kenyan officials are in “control” of the mall, but not all of the attackers or potential victims are accounted for.

Via Hot Air, this operation reportedly was meticulously planned, with the terrorists having rented a store in the mall for months.

Kenya still is searching for clues on how this was pulled off, with the help of foreign intelligence agencies.

Kenya has begun a forensic investigation into the weekend attack on a Nairobi shopping mall with the help of the United States, Israel, Britain and others, the interior minister told a news briefing on Wednesday.

“We have moved to the next phase,” Joseph ole Lenku said, adding agencies from Germany and Canada as well as the police agency Interpol were also assisting. He said he did not expect the death toll, now at 72, including five gunmen, to rise significantly and only expected to find more bodies of slain assailants.

The country is marking the first of three days of mourning, with flags flown at half-mast. Somber, religious and nationalist music was being played on television stations to a backdrop of scenes of rescue from the attack.

Lenku confirmed five Al-Qaida-linked gunmen were killed in a shoot-out with security officers, while 10 people are being held for questioning, though it was unclear where they were arrested.

In all, 61 civilians and six members of the security forces died during the four-day siege by Somali Islamist militia Al-Shabab at the Nairobi mall, while more than 175 were injured, including 62 who remain in hospital.

Kenya FM: We Are ‘Not Going to Apologize for Being Friends With Israel’
http://www.algemeiner.com/2013/09/24/kenya-fm-we-are-not-going-to-apologize-for-being-friends-with-israel/

“…Common Core style” relates to a terrorist act. How?

Reports are that these savages pre-placed machine guns.

This could happen anywhere, except maybe Israel.

“Including Israel”, if they work through dupes, IMO.

That story says the Kenyan government knew the mall was being targeted by terrorists, but didn’t have any specific intelligence about what they were planning. One would think such knowledge would have subjected any new renters to very close scrutiny. It will be interesting to see if that happened here or if, as with so many other terror attacks, the red flags were ignored. For example, did these new renters insist on a short-term lease (like the 9/11 terrorists who enrolled in flight schools and only wanted to learn how to fly large planes, not how to land them)?

Scrutinize new renters? Everyone expects the attack to come through the front door, not from the inside.

The Nairobi mall is Israeli owned.

If I had to guess, the Mossad has built a replica. And, will be training their people to respond to such a mall attack. Just as they did with aircraft. (So when Entebbe happened, the Israelis were really prepared, and practiced, with airline takeovers by terrorists. Thought the distance to Entebbe taxed the fuel consumption of their 4 Hercules Jets. A command Boeing flew overhead.) One of the Hercules had been converted into a field hospital. And, in the first landing plane were Mercedes “replicas” of Idi Amin’s personal conveyance.

One thing to notice is that the Kenyans set up a great perimeter. Lined with soldiers who carried guns. If any of the 13 terrorists “looked out the window” … they no longer had an escape route.

How many shoppers were left in the mall to become hostages? How many were janitors. Or otherwise in the building because they were staff?

How long did it take Israel to have a “mock up” ready? So, when they sent in a few soldiers to aid the Kenyans … they knew their way around?

Don’t forget on the first or second floor of this mall, were housed Israelis who ran a jewelry shop. (3 of them made it out alive. Sounds like the Israelis escaped the 13 terrorists, who probably began shooting before they even reached this store?)

No, it’s not pleasant. The other thing to know is that the Somalis are poorer than dirt. They receive weapons, and support from the saud’s.

The saud’s just keep on getting away with it.

Just remember that the U.S. agencies aiding in the investigation are the same ones that couldn’t see Major Hasan as a threat and couldn’t identify the Boston Bombers even after they’d been identified by other intelligence agencies.

Stop it now. And then kill the Islamists. All of them. Now.

But isn’t that exactly what the terrorists want?

As I understand, assorted Africans have been saying that foreign aid has prevented African nations becoming self sufficient by making loot available for asstd dictators to steal, and by undercutting local farm produce prices. They want all of that, but don’t mention Islamists.

The Islamist problem? Same as what I was suggesting during Viet Nam: Load a single shot rifle and a couple boxes of ammo in a bag, add small parachute, and do a random drop all over the place. Let them settle it.

“that” = “stopping all the other stuff you mention we should stop”

It was reported that local construction guys planted weapons and other equipment in the school at Beslan.