Hey, let’s do an experiment.

Let’s view the Syria conflict and whether it is in our national interest to authorize use of force, and what force, and when, and the timing, and everything about it, through the prism of liberal racial politics.

I know, it’s stupid to try it.  Consider this a “thought piece,” not a prediction of what actually would happen:

I’m not sure what he means by “Blackenstein”

Kudos to Barry for restoring constitution re war powers. Tea People shld luv it but of course wont cuz President Blackenstein did it

I agree with those opposing Obama, but they’re racist and I’m Not

I guarantee you the war mongering GOPs in House will vote no on bombing Syria because….black guy.

Even the usual Obama supporters would keep silent for fear of being called racist for opposing Obama: 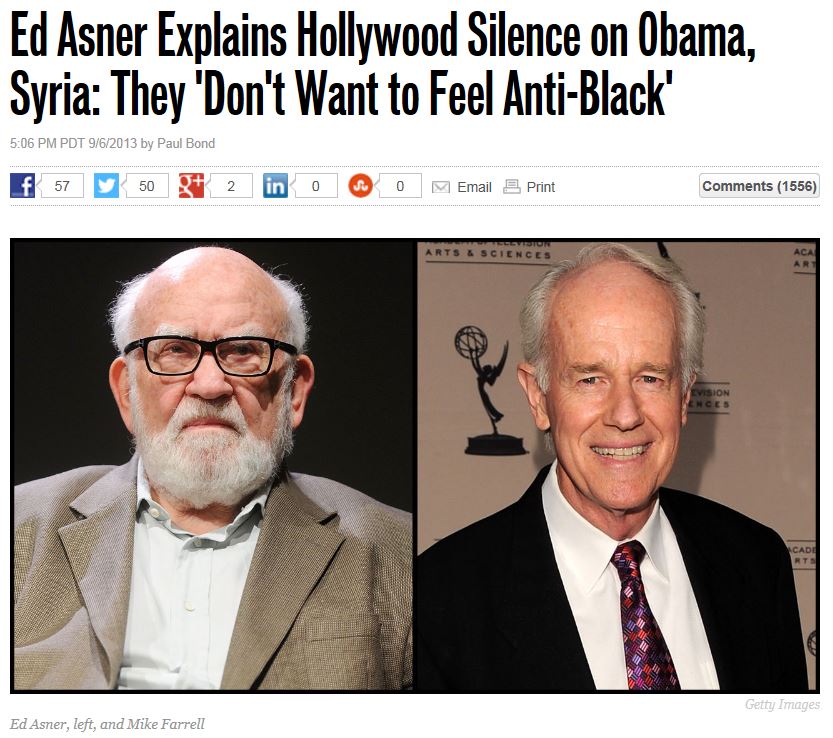 “Kudos to Barry for restoring constitution re war powers. Tea People shld luv it but of course wont cuz President Blackenstein did it”

End of U.S. Imperium—Finally!? Obama About to Suffer Glorious Defeat in Congress?

The coalition of the willing is now down to the US alone as France now wants to wait for more data on alleged gas usage. Yet, President Obama rejects G20 pressure to abandon Syria air strike plan.

The new and inspiring Theme Song of the d-cRAT socialist party:

Come-on all you libtards, sing this catchy tune along with the Seven (of very, very, very many) Dwarfs of the d-cRAT socialist party:

NB: If you do not sing along, you are a RACIST !

Love it! However, I think Alec Baldwin would be better at Grumpy, and with all that botox, Pelosi is perpetully Happy.

Ed Asner… the personification of American progressives. Dumber than a bag of hammers.

And twice as ugly.

You know, I’m beginning to wonder if the real watershed event here isn’t that average Americans have stopped wanting to believe Obama.

Thanks. I was wondering about that.

Well, Obama is a blood-sucking nightmare.

That would be “Blacula”.

I chuckle at all the professional race hustlers, the Sharptons, the Jacksons, the NAACP-ers, criss-crossing the country seeking out evidences and events of racism, unable to find any, making some up, glomming on to others and reforming them into racist events for exploitation, a constant hunting season on White Racists – and the whole time all they had to do to find genuine, insidious white racists is simply look at the Hollywood cracker m-f-ers standing next to them on the stage.

You want White Racists? Go to Hollywood and New York. The entertainment industry is chock full of them. When you run out of racists there, I’ve got a list of American universities you can check out.

Yup. And you don’t have to look far. Talk about the soft bigotry of low expectations! You meet it with that crowd.

For almost 5 years Mr. Ed was angry because we would not agree with him. Now he’s angry that many of us do agree with him about Syria. Mr. Ed just wants to be angry. I’ve said for a long time that liberals are only happy when they are unhappy about something. There’s your proof.

OBAMA TO LINK SYRIA WITH IRAN?

What a limited little twit Maher is.

He seems to believe that Congress is obligated to rubber stamp whatever Obama demands.

It can only be characterized as “restoring” the Constitution if Congress exercises independent judgment – the prospect of which Mr. Potato Head abhors.

That is, he abhors it now. He sure as hell didn’t think that Congress had a duty to do whatever Bush wanted to “maintain the President’s credibility.”

Of course, neither did The Line Drawer – back then.

Who is Weinstein? Calling someone trying to inhibit a stampede toward war a “warmonger” puts more of a strain on the English language than usual, even in Progressiveville.

And I’ve lost track – is Asner an actual stalinist, or is he just a regular everyday progressive? There were rumors a couple of years ago that he was a self-proclaimed stalinist, but those turned out to be based on a misquote. What he’s talking about supra is institutionalized Hollywood racism, not necessarily stalinism.

By the way, Kerry wants another shot at running for president in 2016. He can lie like nobody’s business. But he still looks like the “lurch” to me. And, as far as I can tell, Kerry’s wife, Theresa, has to be willing to fund this project. I doubt it’s got any other “cash flow” available to it. (Okay, we know the saud’s will throw in funds.)

But will Americans buy?

Are we looking at a new-new roll-out of “new coke?”

Maybe, Hollywood will roll out Ishtar, again? Why lose money only once?

You know, Obama’s mother-in-law does voodoo.

If missiles fly Obama’s betting on the voodoo.

His grandmother does, too.

“Even the usual Obama supporters would keep silent for fear of being called racist for opposing Obama:”

Yes, Virginia, they truly are that stupid.

Who cares what these cretins think? If you want to understand something– follow the money. Who wins and who loses with a regime change in Syria? Here is one theory. Qatar wants to build a pipeline through Syria to ship their natural gas. But Assad won’t play ball because that pipeline would hurt his patron Russia. Russia sells a lot of natural gas and doesn’t want the competition. The Economic Collapse Blog says Qatar has given $3 billion to the rebels Syria. Saudi Arabia too is funding the rebels. I don’t know seriously to take this theory, but I’d like people respond to it.

In any case Obama is playing with fire. Russia and China have both strongly communicated their opposition to a strike on Syria, and Russia is sending warships into the area. If he wanted to draw a “red line,” he should have gotten Congress on board a year ago. You don’t issue warnings without solid backing, otherwise shut up. As Calvin Coolidge famously said, “I have never been hurt by anything I didn’t say.”

Obama and his team are good at winning elections, but terrible at governing. He can’t deal with Russia and China by making speeches and having his surrogates call them racists. The U.S. also depends on foreigners to buy our debt, and almost half our federal government is funded by borrowing. Bear in mind that the rest of the world is not necessarily as stupid as the average American voter.

Asner finally says it out loud, Liberal racism in action.

Qatar sits in the Persian Gulf opposite Iran. If it wants to build a pipeline through Syria it would first have to go through Iraq, or Kuwait, Jordan, or Saudi Arabia before reaching Syria. Jordan aside, all those countries have ample oil and gas resources for sale on world markets, so it seems…odd…that they would consider giving Qatar rights to ship gas through their territories. (at least w/o imposing hefty fees).