Many Iranians enjoyed unhindered open access to social media sites on Monday, but it turns out that access was short lived.

In a country that usually blocks direct access to Facebook, Twitter, YouTube and numerous other sites it deems immoral, users were surprised to be logging onto social media without having to use a virtual private network (VPN) or special software to circumvent a firewall. 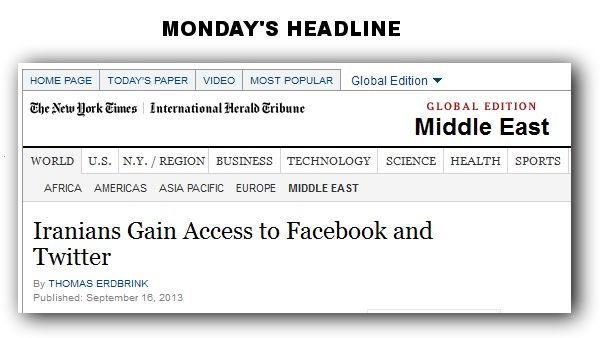 The NY Times reported on Monday that users expressed their excitement, after some assumed that the newly elected Rouhani administration was responsible for the lifted access.

The country’s new president, Hassan Rouhani, has promised several times to reduce Internet censorship, and several of his cabinet ministers, including the foreign minister, Mohammad Javad Zarif, have set up Facebook pages and opened Twitter accounts, some of them quite active.

Iranian Internet users reacted to the apparent unblocking on Monday as if a digital Berlin Wall had just crumbled on their computer screens.

“Hurray, I came to Facebook without using VPN,” a user called Bita posted on her wall. “Thank you Rouhani!!!,” Nima wrote.

Another user named Mehdi posted on his Facebook page, “Dear friends in America, do you believe miracles?! Well one has just apparently happened in Iran and the government in Tehran has lifted its filtering on Facebook!!!” and also tweeted, “Twitter and Facebook has been freed! Rowhani thank you!” (source AFP).

The NY Times noted at the end of Monday’s article that “[Iran’s] government has sometimes let the firewall blocking Facebook and Twitter slip open briefly by mistake.”

In the end, that’s precisely what the Iranian government is giving as the reason for the temporary unblock.  Iranians awoke Tuesday only to find that their internet freedom was temporary. 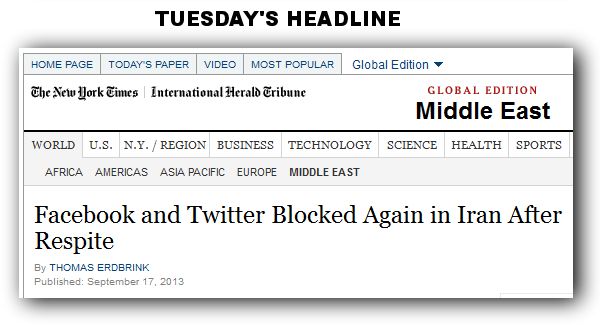 An Iranian official described the temporary access as a “technical glitch,” according to AFP.

Abdolsamad Khoramabadi, the secretary of an official group tasked with detecting Internet content deemed illegal, told the Mehr news agency that “it was apparently due to a technical glitch and the committee is investigating it.”

“If there had been any negligence, it will be punished,” he said adding that he was unsure of the origin of the problem.

But some say it may be more about infighting over whether or not to ease up on some of the country’s strict internet censorship, according to today’s NY Times:

Insiders say the glitch could have been caused by infighting between groups seeking to reopen the Web sites, who are struggling with hard-liners who continue to control the hardware to block Web sites. By Tuesday, Iranian officials had restored the blocks.

Not surprisingly, some expressed their disappointment in today’s realization, like Twitter user Sima, who tweeted, “What a joy was last night, logging onto Twitter without the VPN … #sigh.” (source AFP)

For now, it’s back to circumventing the firewall for some in Iran.

Time for Stuxnet 2, except this time it fools the regime into thinking its firewall is up when it’s not.

Spoof the Iranian Government’s internet onto a cloud server, where it can live in VPN bliss 🙂