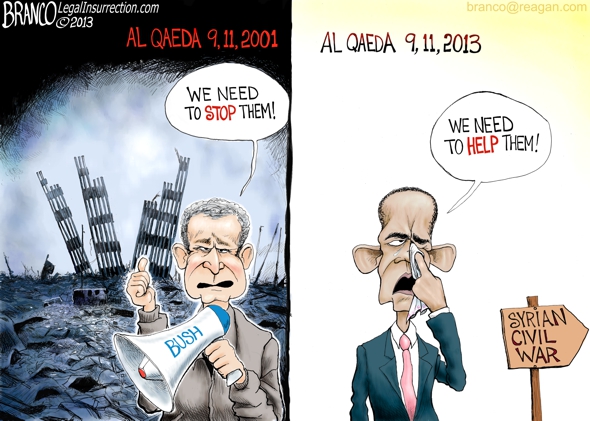 We need to stop being the world’s policeman?

I can’t help but think this must be a crazy time for a political cartoonist. Obama’s position (and that of his adminstration) changes so rapidly (sometimes 2-3 times in a day) that it must be hard to nail one down before another pops up. Added to that is the daily spin which immediately becomes obsolete due to the new spin.

Only a few days ago I could visualize a cartoon with Obama driving a golf ball off the deck of a destroyer toward Syria with some kind of caption about sending one ‘across the bow’ of that dirty Assad. But then that got lost in all the hoop-la about about a perfect action that is exactly balanced to hurt but not to influence the direction of the civil war. It became the perfect strike that will be ‘unbelievably’ small yet deter Syria from even contemplating so dastardly an act again. It became a strike which would be heard around the world and would leave despots/regimes from Iran to North Korea shaking in their boots while being but a pin prick to Syria.

It would seem a good approach might be a cartoon with a wheel of fortune type set up in the Oval office with multiple options for Obama. Maybe it could have a caption indicating it is Tuesday afternoon so it is time for Obama to spin it again for the evening press cycle. The hardest part, of course, would be to come up with more outlandish options than the ones we have seen unfold over the past days.

Great one! It reinforces my thoughts exactly. Those being that W was clearly prudent, wise and “spot on” to invade Afghanistan and Iraq, keep both wars off the books (to the tune of 1 trillionish) and cause the loss of so many American lives not to mention a helluva lot of civilians in those countries. All for? Ahhm. Hmm. Oh yeah, Obama got Osama and has/is ending both wars even as Iraq is starting to descend again into sectarian violence and bloodshed approaching 06 and 07 levels. Good on ya, Bush! Your foreign policy credentials are sterling. Take that, Barry.

[…] Cartoon Source. That apple looks delicious! Did Obama throw in a free sample of common core […]