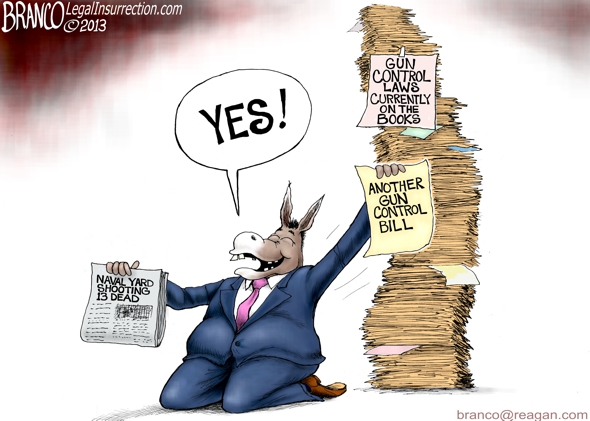 I’d say you hit it out of the park with that one.

Next, the democrats will whine that you depicted their leader as a Jackass. Never mind that it’s the actual symbol for their political party. How very appropriate a symbol, indeed.

Isn’t it interesting that the media is avoiding the co-relation between what VP Biden said using shotguns and what Alexis did with a shotgun?

Was Biden one of the voices in this man’s head?

Great message. And the irony is they don’t understand how they are responsible for this. How much anger has Obama stirred up with his rhetoric? He has been preaching division since his first campaign, and not once has he admonished those who viciously attack others who criticize his policies. That started with Joe the Plumber, Palin, and countless others over the past six years. The term “racism” is used almost daily, “they bring a knife, you bring a gun”, “who cling to their guns”, and other outrageous remarks by Obama have been reported with glee. Every time Obama criticized a person or segment of our Society he got kudos. Isn’t it reasonable to think these remarks, and affirmation of these remarks by the media and complicit politicians could have an effect on someone with a weak mind like this last shooter? I blame Obama, the media, and their violent, deranged, leftward thinking followers for spawning the anger that led to these shootings.

I think some of the gun banners wait eagerly for the next mass murder to happen and then cheer just before they start dancing in the blood of the victims.

Heck, they probably have the press releases calling for more infringements already all written up, just search-and-replace to insert the details of the new incident…

Boy, you nailed it again Bronco!! Libtards of both parties love a disaster so they can steal away more of our God given Liberties.