Branco Cartoon – Got Your Back, Ted

Branco Cartoon – Got Your Back, Ted 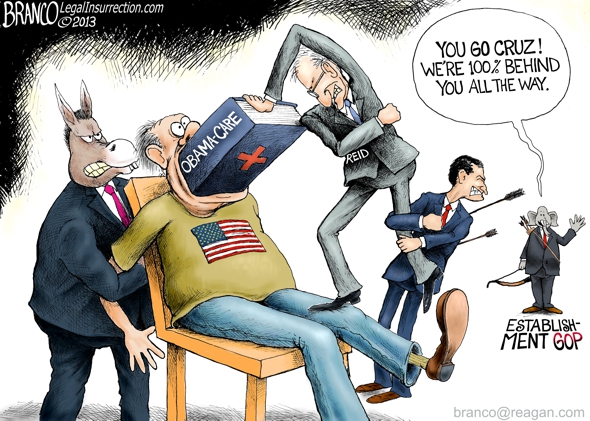 Awesome cartoon. It perfectly captures the spaghetti spine establishment. I have been burning the phone lines and email to every Senator I can for the past 2 days. I’m not giving up on Ted Cruz, he hasn’t given up on us. There will be repercussions for those with no spines who let their bruised egos get in the way. The establishment have attacked and abandoned a fellow party member who, with their support, might have put pressure on 6 Democrats up for re-election to vote with the GOP.

“I have been burning the phone lines and email to every Senator I can for the past 2 days.”

Good for you. Thanks!

This is one time the saying “a picture is worth a thousand words” applies, with interest.

Right on Branco! The Establishment GOP is a bunch of weak-kneed losers! That’s why I always vote Libertarian now. Both parties do not have our best interests at heart any more (if ever they did).

You forgot to put John McCain behind Ted, plastering a “Kick me!” sign on his back.

Of course, you should also have Harry Reid plastering one on John McCain at the same time.

McCain and the GOP Establishment are the designated losers. They are the Washington Generals to the Democrat Harlem Globetrotters.

But consequences indeed. YOU handed us Barry. What about the trashing of Palin, by ‘your staff’? Me thinks it was YOU leading that charge. Wanna’ know why, John?

Because YOU (not your staff) YOU are doing the exact same thing to Senator Ted Cruz.

The government’s got your wallet!

You expect the turkeys in Congress to vote against a trillion dollars more in income? And, think of all the jobs!

It’s like the TSA. But spread out everywhere. Paperwork shuffle like you’ve never seen it done before.

It seems Obama wants his name erased from this bill. So it’s being called “ACA” … Or (ha ha … not so) Affordable Care Act!

One thing that’s replacing our Constitution is Orwellian “speak.” So, when the government says “affordable” … right away … the price of admission is MONEY.

The narcissistic brat is restraining the American public. His sock puppet Reid is doing the will of dear leader. McIdiot is holding the bow and arrows.

Great cartoon, as usual. Altho, I don’t see how you got the “establishment GOP” to stand up so straight, without a spine.

I lost some friends in 2000 and 2008 arguing that McCain was an authoritarian who paid lip service to tradition rather than a small government conservative. How anyone ever saw his as other than a Washington DC insider has always mystified me. His last posting in the US Navy was as their liaison officer to the US Senate and he had sitting US Senators in the wedding party when he married Cindy in 1980. Some maverick.

Wouldn’t it be hysterical if the FDA halted ObummerCare as harmful to human health?

The GOP, so far, has failed the national test. And, probably failed lots of people in what’s considered “Red States.” “Purple States. And, “Blue States.”

What happens when Americans get good and disgusted with both parties?

Journalism is in a state of hunger! Instead of journalism, more often than not we see “spin.”

Do industries go through change? Sure.

Remember when Hollywood cashed in on Silent films? Overnight “talkies” took over. And, some stars, of the silent era, had very high pitched voices … that didn’t work when they were recorded to films with sound.

I doubt ANY of the current crop of politicians will have great reputations, ahead.

Heck, I can remember when JFK was alive … and, we Americans, were sold on Camelot.

The other day my son asked me “what’s Camelot?” (I can still sing the songs! And, then I remembered “The myth of King Arthur.)

Today, you can’t name a single Kennedy as a viable candidate for an “important” office. Even in Massachusetts, they’ve moved on.