For a government shutdown if it happens.

The U.S. Senate is dysfunctional because of Harry Reid.

No votes on most House legislation.

No nothing except his way or the highway.

The poisoning of our politics by Reid did not start with the latest battles, it has been his methodology for years.

You will not hear this narrative in the mainstream media.

So on this day of all days, Tweet out #BlameHarryReid.

(added) As of 12:41 a.m., the hashtag #BlameHarryReid was still rising (Twitter feed added to bottom of post):

Twitchy if tracking the action, #BlameHarryReid: Looming shutdown? Citizens to Sen. Reid: Own it. 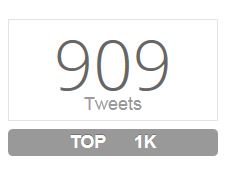 Update: True to form, Politico via Drudge reports that Reid, who had the Senate take all of yesterday and this morning off, will not allow a vote on the House bill funding the government but removing the medical equipment tax: 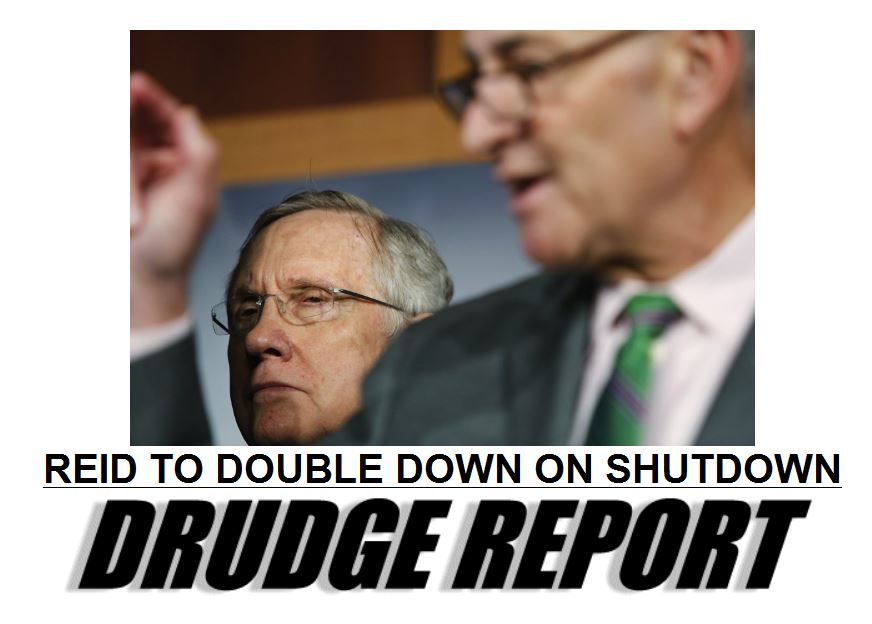 Astounding: Pres Obama wanted to meet w/ Congressional Leaders to avoid shutdown, Harry Reid talked him out of it. http://t.co/nGNkg3HddC

It is TRUE. Dirty Filthy Harry is the worst man in the world (or running neck and neck with them as are).

And, remember, America, he has total disdain for you, and thinks you smell bad.

I think Rags meant the worst among living scumbags.

If only the Republicans had run more attractive candidates in 2012, Reid would have become a non-entity like Pelosi.

It also would have helped if the unions hadn’t bussed in extra voters during Reid’s last election.

It isn’t just the party that “runs” candidates. Individuals decide to run (active, intransitive), and citizens decide to help promote their candidacy, or not; and then primary voters decide who’s on the general ballot. Sure, the party leadership can affect the dynamic. But it starts with who chooses individually to be a candidate, and it ends with the collective voice of voters.

Moral of the story: try to persuade a better candidate to run (or run yourself), and then work to persuade voters to choose that candidate.

All of the attention that Harry gets is funny to me; kind of like the attention that Newt drew upon himself from the left back in his day. It seems silly to me that, as a Republican, I should expect Harry to do what my party wants instead of what his party wants. Harry Reid is not even a speck of dust in the hourglass of time and he will be gone soon enough. The real trouble, IMHO, is the precedent that he is leaving. I guess the Founding Fathers did not envision such an ass ever being the Senate Leader and driving the country in directions that go against the principles of the Constitution. The left will be really upset when a Republican does the same things in the very near future, and the right will be pleased. Ce la vie…

Hairy use to be a Boxer, but now is a little barky, nipping at heels Chihuahua.

Hairy use to be a Boxer, but now is a little barky, nipping at heels ChihuahuaYorkies .

Reid governs just how he looks, and he looks like a nasty, mean-spirited guy who mysteriously got rich while in government service and speaks in a soft voice to lull you into thinking he’s harmless.

So, in the end, the 25 RINO’s disloyalty last week was in vain.

Great report, but until Prof Jacobson chairs the news coordination meetings for the predominant media, these truths will just hide in plain site. What the country will hear is that Obama’s great service as President is being sullied by envious, malicious, do nothing republicans who prefer to hurt people via government shutdowns and who refuse to meet the President half-way.

GOP, Orwell says hello — and we might want to study up on branding because one way to avoid being branded the party of shutdown is to avoid shutdowns. The sad thing is that Obama and the left were doing a great job of branding themselves as completely incompetent — shutdown will be spun to trump that impression.

So it has down to this: If we cannot get a one year “delay” in the “implementation” of Ocare, then the gov’t shuts down. But Boehner, and even Cruz, are fine with raising the debt ceiling, again. What is the national debt today, and how does it compare with when O took office? Shouldn’t we be opposing that as strongly as, or more strongly than, we are fighting for a minor “delay” in Ocare?

At least some Republicans are of the belief that they should fight for limiting ObamaCare in the funding CR, and maybe cutting spending with the debt limit legislation. They have really two different opportunities to impose their will on the size and cost of our federal government right now, and the idea is to match their goals with the two. We shall see.

As predicted on earlier posts, I danced a jig and sang this morning when I opened the news.

This government is so corrupt, they SCREAM BLOODY MURDER when their rate of growth is cut.

It’s time to use the internet and inundate the cyber sphere with the Truth of this shutdown.

Let’s see what happens if we shut down the gubmint for three years, three months and three weeks. We’ll call it the “half-beast” plan.

A simple Hashtag, for a simple truth.

I will drop Brian Holloway a note; he always loves to jump on a viral Twitter wagon as it becomes a movement – more $$$!

😉 Just a little harmless fun… Here is a link to your point:

#BlameHarryReid is second on Twitter’s trending topics, right behind #HarryReidsShutdown. I think the message is getting out there.

One wacko bird and one meteorologist can’t be wrong … it’s the end of the world.

Professor, just saw your tweet about the National Zoo Pandacam being held hostage. Gave me quite a good laugh.

With $2.7 trillion in receipts, there is no justification for a shutdown or default. With over $1 trillion in deficits, it is clear that neither is mandatory. With no budge ratified by the senate, Reid is laughing. With no effort to compromise, Obama is, once again, implicitly threatening the people he serves.

Didn’t they play the same game with Obamacare? Hopefully, there are Republicans and Democrats who remember the tactics employed to coerce its adoption.

Obamacare… It is merely a clump of nonviable policies. It is a burden on the People. Dismember it. Vacuum it. Flush it.

Well;
I think the House should have taken the bill sent back from the Senate, wiped it out and returned it as first submitted.
With complete de-funding. The machine will continue to grow if fed.
No negotiations are necessary, Reid and the President can bluster all they want. The House holds the power of the purse.
Of course, I would be considered a terrorist for my interest in free market principles and fiscal responsibility.
Along with a good lot of the rest of you.

“The problem with Harry Reid is that you DON’T eventually run out of other peoples deciding they hate Obamacare.”

Done, plus I’m starting to use that hashtag on my G+ feed as well. Great idea.

The problem is that after 40 years of federal control over public education, our electorate is so dumbed down they cannot process complex information. Since we are the party against big government, they readily believe the Democratic/media meme that we are against all government and want to shut it down.

In reality, it is Reid and Obama who don’t care who suffers from their policies and tactics, but reality is trumped by perceptions every time.

Such a surprise to see myself in the twitchy listings for #BlameHarryReid with over 85 retweets (at this posting). I know “Dirty Dingus” Reid won’t change his mind but if one tweet or retweet makes one Dem Senator constituent call their “made” person in the Senate to toe the line that the American people want, than the whole experience we are having right now will be worth it.
I do worry about the propaganda speech The Won is about to give.

I’ll never forgive the NRA for endorsing this evil man 2010. I regret that I had only one membership to cancel.

Then you canceled your membership for nothing. They didn’t endorse him:

The following is a statement issued on in August 2010 by NRA-PVF Chairman Chris W. Cox on The 2010 Nevada U.S. Senate race:

“In the coming days and weeks, the NRA Political Victory Fund (NRA-PVF) will be announcing endorsements and candidate ratings in hundreds of federal races, as well as thousands of state legislative races. Unless these announcements are required by the timing of primary or special elections, the NRA-PVF generally does not issue endorsements while important legislative business is pending.

“The NRA-PVF also operates under a long-standing policy that gives preference to incumbent candidates who have voted with the NRA on key issues.

“The U.S. Senate recently considered a number of issues important to NRA members, including the confirmation of Elena Kagan to the Supreme Court. Out of respect for the confirmation process, the NRA did not announce its position on Ms. Kagan’s confirmation until the conclusion of her testimony before the Senate Judiciary committee.

“Her evasive testimony exacerbated grave concerns we had about her long-standing hostility towards the Second Amendment. As a result, the NRA strongly opposed her confirmation and made it clear at the time that we would be scoring this important vote.

“The vote on Elena Kagan’s confirmation to the Court, along with the previous year’s confirmation vote on Sonia Sotomayor, are critical for the future of the Second Amendment. After careful consideration, the NRA-PVF announced today that it will not be endorsing Senate Majority Leader Harry Reid for re-election in the 2010 U.S. Senate race in Nevada.

“NRA members and other interested parties are encouraged to visit http://www.NRAPVF.org for more information as Election Day draws near.”

…so, kindly stop falsely smearing the NRA. Thank you so much!