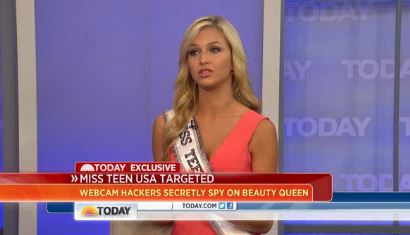 The FBI has made an arrest in the case involving the sextortion attempt against Miss Teen USA Cassidy Wolf.

The FBI has arrested a 19-year-old Temecula man who authorities believe to be involved in a “sextortion” case involving Miss Teen USA Cassidy Wolf from Orange County, officials said Thursday.

Jared James Abrahams is accused of cybercrimes for allegedly hacking into victims’ accounts, according to charges unsealed Thursday.

Laura Eimiller, an FBI spokeswoman, confirmed that Abrahams had been taken into custody.

Investigators have identified several other victims in the case.

Sextortion has become a more commonly used term as social media and chat technology popularity has grown.  It refers to the coercion of a victim in which the offender tries to extort sexual images or favors from the victim, or makes other demands from the victim, sometimes financial demands, to stop the publication of sexual images.

Months before she was crowned Miss Teen USA, Wolf received a message from her Facebook account that someone else had tried to access her account.  She said her other social media accounts also started showing strange activity. And then the same night, she received an anonymous email that included attachments of nude photos of her in her own bedroom, and the sender demanded she “perform” for him.  If she didn’t, he threatened to post the photos of her online.

The sender of that email had hacked into her computer and remotely accessed her webcam to obtain the photos without her knowledge.

Wolf said the incident terrified her, and that the thought that someone could violate her privacy in such a way gave her nightmares.  In an interview she did with the Today Show last month, she describes her reaction and the steps she and her mother took to contact authorities.

“I was terrified,” she said on TODAY Thursday. “I started screaming, bawling my eyes out. I was on the phone with my mom, and I felt helpless because I wasn’t sure what to do, so it was a very terrifying moment.”

Her mom called the police right away, she told national investigative correspondent Jeff Rossen. The incident has triggered an investigation by the FBI, who believe the same person who hacked into her webcam did it to at least a dozen other women.

The LA Times reports that several other victims have in fact been identified in the case.

According to the affidavit, which does not name the victims, the FBI has been investigating Abrahams since March, when authorities learned he allegedly compromised victims’ computers to obtain nude photographs — and in some cases, videos — of the victims by remotely operating the victims’ web-enabled cameras.

He would then allegedly contact the victims using two AOL accounts he had taken over and send the victims nude photos to show what he had obtained. Abrahams, investigators allege, threatened to disclose the images and videos unless they did one of three things: send nude photos, send a nude video, or log onto Skype and did what he said for five minutes.

Aside from other sextortion cases mentioned in the LA Times article, webcam hacking/cracking in general has also been making news headlines of late.  Last month, someone reportedly cracked into the webcam baby monitor of a Texas family and, after seeing the baby’s name on the wall, called her by name and said sexually explicit things to her.

Tech blog Ars Technica did a (rather creepy) post earlier this year on the men who spy on women through their webcams (warning NSFW language).

Since experiencing the incident, Miss Teen USA has been speaking out publicly to warn other potential victims and raise awareness of the issue.  The Today Show also conducted a demonstration to show the public how webcams can be controlled remotely by other users.

One additional piece of advice:  keep a piece of dark tape over your webcam when not in use.

Well, congrats to the FBI. Let’s hope they didn’t screw this one up.

If they have the right guy, he needs to serve about 20 years for this.

I don’t see a link to the emailed photos. The public has a right to all the, um, evidence.

This is particularly despicable and alarming, but I favor stiff sentences for anyone who hacks into others’ computers or private files anywhere (‘cept of course the NSA, our benevolent overlords who are most welcome and very good-looking), and of course also peeping and extortion laws should apply in this case. Throw the book at him.

Plus give this guy an extra five years consecutive for being a complete idiot. He had hacked into MISS TEEN USA’s personal webcam and saw her get naked in her bedroom, but that wasn’t enough for Einstein, nooooo, he had to try to intimidate and humiliate her, too. What a sick freak!

Also, castration should be an option in such situations – not for the protection of the victim or present society, but for the benefit of humankind forever: he should not be allowed to breed.

The eunuch sentence could be very effective in more than just this case. Recidivism among pedophiles is close to 100%.

We could take out all of NAMBLA with it.