An abortion or a gun?

An abortion or a gun?

Which are you more likely to survive?

Another from Bill in the St. Petersburg area:

Guns may kill people but abortion definitely does…. 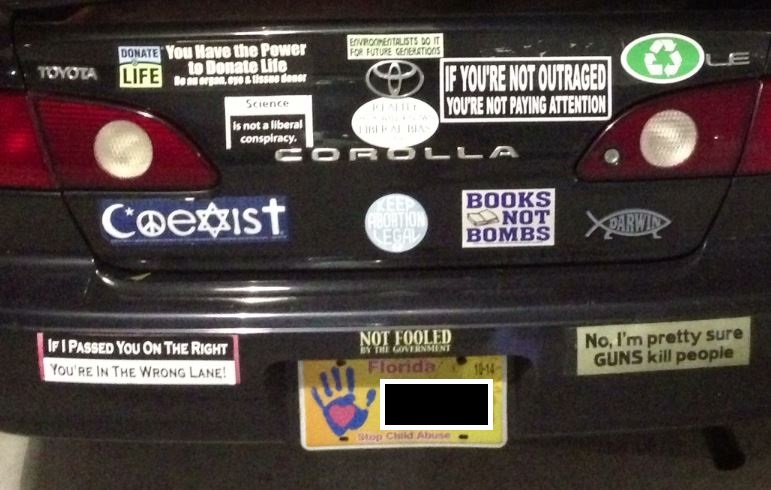 Now that’s one I wouldn’t mind having on my vehicle.

It’s about the only one on there I could agree with, too. I have a feeling, however, that the owner of this vehicle is paying attention to the squirrels and not the reality.

“No, I’m pretty sure that guns kill people.”

In response, I would like to propose a bumper sticker that reads:

Pro-lifers do it for future generations.

The Irony of “Donate Life” (blood?) and “Keep Abortion Legal” together on the same car is palpable.

I do like the one about not driving in the left lane. I hate that. I’m looking at you, Minnesota.

Hard to imagine that twit being to the right of anyone.

“Not fooled by the government”? You could have fooled me.

The stickers do what they’re supposed to do: I personally am more than convinced that this woman (any bets that the car’s owner is not female?)is a good, righteous, virtuous person whose moral superiority to those who do not share her views (I’m inclined to think that “opinions” implies more thought than she gave) is overt and beyond doubt.

That’s the point, isn’t it?

Do you know the republican party keeps losing national elections?

Did you know $2-billion-dollars were spent on the lackluster 2012 election. And, Mitt Romney lost it?

Perhaps you don’t know that the republican party owns the label of being retrograde religious lunatics, who want to cancel out the LAWS that made abortions legal?

Did you know illegal abortions, once called back-alley abortions, cost lives? But go ahead. Make that your mantra.

Dunno what will happen in 2016. It’s possible Chris Christie will bring his brand of bullying to Iowa. And, beyond.

But having this crazy label of intolerance against women isn’t very helpful. Ruth Bader Ginsberg even posits that women’s control over their own bodies is at heart an EQUALITY issue! (Roe V Wade stipulated it was a “privacy issue.”)

Do women have equality, yet? Abigail Adams tried so hard to convince her husband to include women in the right to vote, department. (Plus, then, there were plenty of “leather-aproned men” … who worked the trades … who weren’t given voting privileges by the Brit’s, that John Adams ALSO had to deal with that … as he tried to garner support for a revolution. (And, not lose Virginia!)

George Washington was a Virginian.

Just curious, did your son or Reddit tell you that the Democrat party is the one that makes it their mantra to keep ANY regulations of sanitation and hygiene from being imposed on abortion “clinics”, which pretty much allows them to become back alleys. Ask your son about Dr Gosnell.

Also, did you know that it wasn’t a “Law” which made abortion legal? It was a Supreme Court decision which made 50 state laws banning abortion illegal.

Lastly, if allowing Democrats to call Republican and Conservative women, included elected officials, stupid, illiterate, evil, c*nts and tw*ts without any public condemnation, and yet you think the GOP has a “war on women”, then perhaps Reddit isn’t all that your son made it out to be.

This may be only a guess, but I’d be willing to bet that you call yourself an Independent because you’re just ashamed to admit in public that you’re a Democrat.

There was a time politicians gave out “buttons.” Circular pins you could put on your hats or clothing.

(I’ve got one for Ross Perot that I put in the vault.)

And, I haven’t seen bumper stickers on cars in years and years. I thought they vanished because people don’t want their cars keyed when they park in a parking lot.

Maybe, it’s a mood of “independence.” Even among lots of people who vote, if you ask them “which party” they often say “either one. I’m an independent. I’ll vote the person. Not the party.”

I’m not in the age group that gets called by pollsters. But I did ask my son where I could pick up information, and he said REDDIT. So I go there every day.

Been meaning to get a pic of the liberal’s car in my neighborhood with the “Coexist” sticker right next to the “Darwin” logo. I love the mentality of it, the arrogance and dishonesty of telling everyone else to tolerate each other while simultaneously insulting Christians by mocking them.

I’m pretty sure that the driver of this car has MPD:)

I’m sorry. I misinterpreted one of their bumper stickers. I’m now sure that the driver has an even worse affliction…Liberalism:)

More human lives (several hundred million) are prematurely and with premeditation terminated each year with vacuums and scalpels than with guns or any other tool. More human lives are lost in clinics than in theaters of war. Perhaps we should ban vacuums and scalpels. What sane, decent human being would terminate another human life for reason of preserving wealth or welfare, or for personal convenience?

Make sacrificial rites (e.g. elective abortion) illegal. Think of the millions of children lives, in American alone, that you will be saving.

As for guns, they only kill people when they self-discharge, which is an extremely rare occurrence. Otherwise, it requires a conscious effort and directed force to activate their function. On the other hand, rarely does a vacuum or scalpel, of its own volition, enter the uterus and commit premeditated murder.

Liberty is only suitable and possible for women and men capable of self-moderating, responsible behavior. There is a reason why children, and immature individuals generally, enjoy limited freedom.

The person who owns this car is a pediatrician.