On Friday we asked:  Which was worse: Middlebury 9/11 flag-grabbing or Oberlin racism hoax?

It arose from the actions of Anna Shireman-Grabowski, a Middlebury student, who felt compelled to destroy a 9/11 memorial on campus by trashing thousands of small American flags, each one representing a person who died on 9/11:

While the American flags on the Middlebury hillside symbolize to some the loss of innocent lives in New York, to others they represent centuries of bloody conquest and mass murder. As a settler on stolen land, I do not have the luxury of grieving without an eye to power. Three thousand flags is a lot, but the campus is not big enough to hold a marker for every life sacrificed in the history of American conquest and colonialism.

The result may have been the closest poll we’ve ever had here (I suspect voter suppression, and may demand a recount): 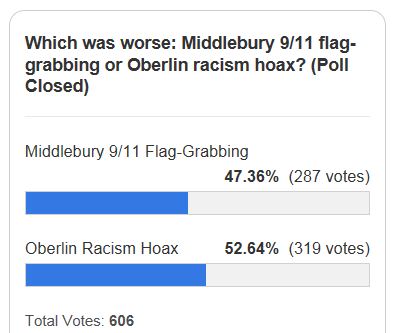 In an update, the Abanaki tribe wants nothing to do with the Middlebury flag-grabber, via Daily Caller:

Don Stevens, chief of the Nulhegan Abenaki Tribe, said his tribe did not approve of the actions taken by five people–including one student–at Middlebury College last week.

“We didn’t know anything about this and if we had we certainly wouldn’t have sanctioned it,” he said in a statement to The Addison Independent.

… Steven said there’s no evidence that the field is an Abenaki burial site. And even if it was, the flags would be a welcome presence.

“Our burial sites honor our warriors and their bravery,” said Stevens. “Putting flags in the earth to honor bravery would not be disrespectful.”

This is what happens when you have liberal activists on campus whose life of privilege at an elite liberal arts college leaves them wanting for something more dramatic in their lives.

There is an occupier here, but it’s not Middlebury College. It’s the student activists so bored and disappointed in their own lives that they feel the need to usurp the imagined outrages of others.

Get a life. Your own, not someone else’s.

Update: A reader sends this link about one of the non-Middlebury students involved, with the comment “Another Senator Warren in the making”: Meet Amanda Lickers, the Canadian Left-Wing Gay Fake-Indian Who Desecrated a 9/11 Memorial.

Anna Shireman-Grabowski sounds like she needs to do about 1,000 hours of community service, in addition to replacing EACH AND EVERY flag she removed from that memorial.

That’d be enough for me, anyways. Along with an apology to the people affected, including the Abenaki tribe.

She (and her friends) should be charged with vandalism and theft.

Why not just expel her? With no refund for this year’s tuition.

As a settler on stolen land, I do not have the luxury of grieving without an eye to power.

Feel free to leave at any time, Ms. Hyphenated. I’d suggest some nice islamic nation. You will adore their treatment of women.

I’d like to thank Mr. Don Stevens for his timely and honorable response, which takes into account the intent of the people who put up the flags, in the first place.

I’d also like to point out that there is at least one name associated with this story, besides, Anna Shireman-Grabowski’s, that hasn’t surfaced.

Who put her up to this? Where is the malicious adult, or group of adults, that has taken advantage of an obviously emotionally-disturbed and easily-wound-up fool?

Somebody made up a bunch of [email protected], and then went trolling for toys to wind up and set off. While the stupid, rude students are unquestionably to blame for their own ugly actions, there’s a false teacher in here, somewhere, that also needs to be exposed.

Where to start? There are likely many false teachers in the life of this precious little flower.

Who proclaimed these bitches to be queens?

Thank you, Chief Don Stevens, for speaking reality to pomposity.

The Indian Tribe was here, first.

The media runs to tell propaganda stories. Some do well on right wing sites. Others collapse because there’s a lack of interest.

As we came to 9/11, we can no longer point to any successes. A “war on terrorism” is really a war on citizens of the United States.

Yes, ‘denial’ is the first stage. There’s a long haul ahead.

My thanks also to Chief Don Stevens.

For those who want a bit more detail on the how the event unfolded you might want to check this link. (Of course one must be careful about media accounts of events but this one appears to be unusually detailed, especially for a small publication.)

No, thanks. I grew up with them. I was sick of them at age 15. They never change, and are completely interchangeable.

I initially had a hard time with the vote because the underlying cause of the reprehensible conduct of the students at both Oberlin and Middlebury is a learned pathology to hate their own country. Especially white people.

I ultimately voted for Oberlin, though. Those guys clearly had a malicious intent to strike terror in their fellow students. I could be wrong about the girl at Middlebury, but I don’t think she was motivated by a desire to hurt anybody with her act. She struck me as deeply confused, while the guys at Oberlin were being manipulative and wanted to stoke fear. That’s evil.

I chose Oberlin because it appears the school administration was complicit. “Never let a good crisis go to waste” at the very least. While Middlebury may not punish the perps as much as I would like them to, at least they are reacting the way I would hope they would.

Amanda Lickers, pathetic. Angry and dysfunctional person flailing about in search of something to give meaning to her defective life.

I have to wonder if Amanda’s last name is as made up as her Ward Churchillian ethnicity. I mean, come on….. a lesbian named Lickers?

Maybe our names do control our destiny. I once had a urologist named Dr. Wang.

I smiled at her name. Amanda Lickers. The name is appropriate to her sexuality. There’s a word for that, but it won’t come.

In another way, it is totally inappropriate (a-man-ta-lick-her).

(OT to a different Post about this issue.) I was very surprised and impressed to see that Middlebury even had a Republican club. I would have put even money down there was no chance.

In my novel I have the Abenakis exterminating 2995 students & alumni ( and cats ) by tomahawk & converting the place into a Casino/ ski lodge.

You need to add in a pet cemetery and possession of the winter caretaker. Maybe an evil clown too.