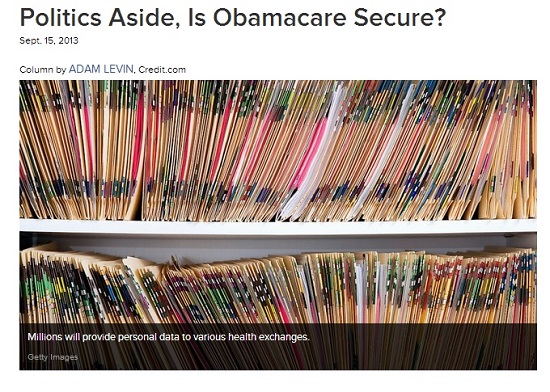 Obamacare’s start date, October 1st,  is rapidly approaching. As the impending Tuesday draws nearer and nearer, new headlines are drawing attention to unsettling aspects of the system. Troubling enough was the NSA surveillance scandal this summer. Now, add sensitive medical information to the mix.  Concerned citizens are raising privacy questions, from sex life to social security numbers, under the new system.  How could your own privacy be affected by Obamacare? Find out below:

1. Obamacare will question your sex life.

Talk about intrusive- Obamacare is set to question your sex life, reports an article in the New York Post.  Author McCaughey describes how under Obamacare, patients can expect to be asked personal questions about their sex life, whether or not it is relevant to their medical situation. McCaughey describes how doctors are being given economic incentives to collect and divulge answers to questions that doctors may “consider inappropriate and unnecessary.” New York cardiologist Dr. Adam Budzikowski describes the sex questions as “insensitive, stupid and very intrusive.” 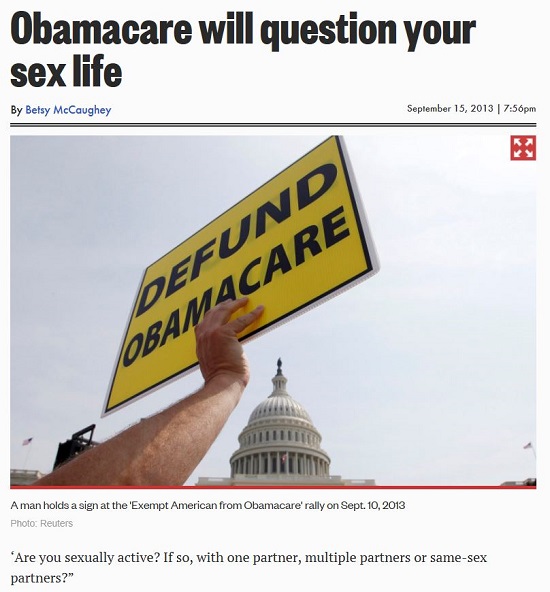 2. Breaches have already occurred, and may occur again.

Think all data is secure under Obamacare? Think again: the Star Tribune reports that a breach in security has already occurred. According to an official at MNsure, the “official Minnesota health insurance marketplace/exchange,” private data has been mishandled. This data includes the “Social Security numbers, names, business addresses and other identifying information on more than 2,400 insurance agents.” Oops. 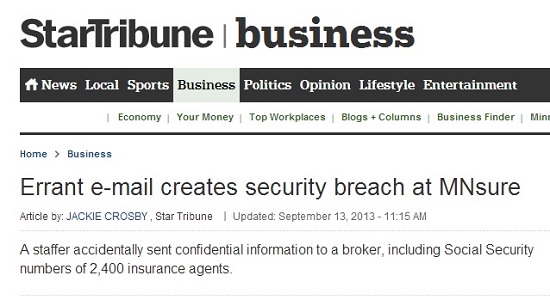 3. Con-artists are taking advantage of the confusion.

Con-artists are eagerly taking advantage of the general confusion about the new system, according to an article on ABC News. The author states that the manipulation of the confusion caused by Obamacare is likely only to get worse. He describes how, “scam artists- masquerading as government representatives — have tricked a number of consumers into coughing up personal information over the phone. That’s just the opening shot. Once millions of consumers begin providing unprecedented amounts of personal data to various health exchanges through countless state and federal networks, the real assault will begin.”

What is a “navigator,” you may ask? Good question. Health and Human Services Secretary Kathleen Sebelius describes a navigator as one of the “many resources available to help consumers understand their coverage options in the Marketplace.” A recent article on Forbes more aptly describes it as “a fancy term for taxpayer-funded community helpers.” Indeed, the Obama administration recently poured $67 million into 100 different organization for the program.  However, little training and inadequate standards for “navigators” could mean data loss and theft. In August, 13 attorney generals sent a letter to Health and Human Services expressing concern that “As it now stands, it is inevitable that HHS’s vague ‘standards’ will result in improperly screened or inadequately trained personnel.” 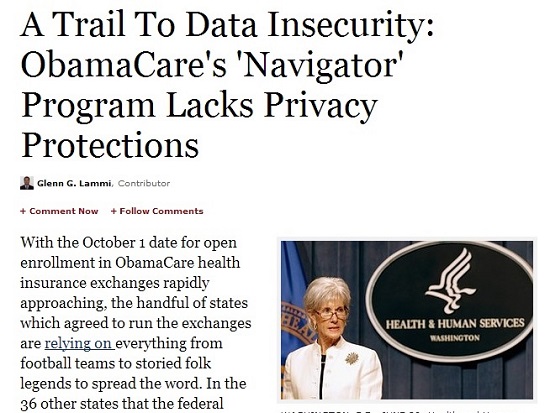 5. Someone could pull a “Snowden” with your lab results. 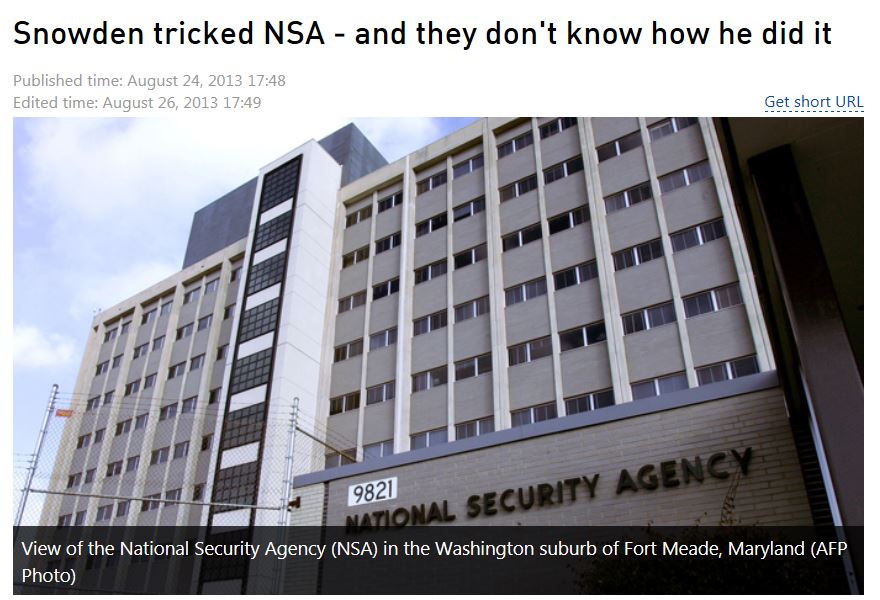 Why don’t we just get to the heart of the matter? If you are opposed to Big Government and the Democrat Party – your medical records and the medical records of your family can be used against you.

If you think I am being alarmist then you haven’t been paying attention!

Do not doubt it either, the government is not your friend and they are not here to help you.

Professor, it would be good to point out that a person wishing to escape the higher priced ObamaCare policy with limited access to doctors and medical facilities still have until December 15, 2013 to get an ordinary high deductible health insurance policy. Those policies can be renewed in 2014 for one year. This just may be a way out for the young people to escape the fleecing planned for them.

If you have to pay the “tax” for not having a health insurance policy then at least figure out if paying for a non ObamaCare policy is worth it. While the minimum is $95 for the year, there is a maximum of 1% of income but that amount can not be higher than the bronze plan. Let’s say you make $30,000 for the year, that would translate into $300. While $300 for the year is much less than even having a high deductible policies you might want to preserve your option by still getting a non ObamaCare policy.

What is the possibility of self insured bonding?

If I insure myself for the costs of my health care, am I not in compliance with the (UNCONSTITUTIONAL) law?

Laurel Conrad: Talk about intrusive- Obamacare is set to question your sex life, reports an article in the New York Post.

I am already set to ignore this law, citing Civil Disobedience. I will not pay taxes for a product that I will not own, and if they want to tax me for the purpose of funding a product/service/law I abhor, I will cite Thomas Jefferson:

“To compel a man to furnish funds for the propagation of ideas he disbelieves and abhors is sinful and tyrannical.” – Thomas Jefferson

I will have none of it, and I will NOT comply.

Paul: I will have none of it, and I will NOT comply.

The rule you favor “would open the prospect of constitutionally required religious exemptions from civic obligations of almost every conceivable kind — ranging from compulsory military service, to the payment of taxes, to health and safety regulation such as manslaughter and child neglect laws, compulsory vaccination laws, drug laws, and traffic laws, to social welfare legislation such as minimum wage laws, child labor laws, animal cruelty laws, environmental protection laws, and laws providing for equality of opportunity for the races.”

I am quite prepared for the consequences of my actions, and I will still NOT comply.

I’m not arguing that constitutional laws be able to be ignored on a whim. And the Government ought not to be able to force compliance with unconstitutional acts, even though, by right of force, they often do. Generally APPLICABLE laws are constitutionally based, are they not?

I see no conflict with my position and with yours, they are “Apples vs. Oranges”.

Paul: I’m not arguing that constitutional laws be able to be ignored on a whim.

Your stated reason was you found the law to be abhorrent. But anyone can say that about any law. You haven’t provided a reason to disobey that trumps the importance of the rule of law.

But there are reasons for this law being unconstitutional:

#1) It is a tax revenue bill that originated in the Senate, not the House as is constitutionally required.

#2) It expands the commerce clause beyond reason to compel people to pay for a product or service they may not desire.

#3) It was passed through congress in a very suspect and underhanded manner, in which it was claimed it was not a tax, and then argued before SCOTUS that it was indeed a tax. A bait and switch if ever there was one.

#4) The implementation of this law is haphazard at best, and waivers are given arbitrarily to certain groups but not others.

For these reasons, I will not comply with an UNCONSTITUTIONAL (and therefore NOT GENERALLY APPLICABLE) law.

Paul: For these reasons, I will not comply with an UNCONSTITUTIONAL (and therefore NOT GENERALLY APPLICABLE) law.

The Supreme Court has found otherwise. If your only reason is to uphold the constitution, then deference to the courts is part of that. You seem to have other motives, though, as you seem quite petulant about it.

You ssked for reasons, and I gave them, and then you dismiss them? I already told you that SCOTUS is not the final arbiter of what is constitutional, whether or not they agree or disagree is moot.

Ah yes, Paul is “quite petulant” about having his constitutional liberty and privacy signed away to an increasingly totalitarian government under a law that the majority of citizens hate (and most of the others aren’t paying attention)– just as Rosa Parks was quite petulant about being relegated to the back of the bus, and suffragettes were quite petulant about being denied the basic rights of citizens simply because they were female. We can’t have petulance toward our all-knowing superiors, can we?

Paul: You ssked for reasons, and I gave them, and then you dismiss them?

Because those reasons don’t seem consistent with your proposed action. Earlier you suggested you abhorred the law. Is your entire argument concerning constitutional process, or is there something else?

Radegunda: Ah yes, Paul is “quite petulant” about having his constitutional liberty and privacy signed away to an increasingly totalitarian government under a law that the majority of citizens hate

That’s not the reason Paul gave, but something about the bill originating in the wrong chamber of the Congress. That’s why we questioned the discrepancy between his stated position and his tone.

A majority reelected Obama knowing full well that he would work to implement ObamaCare.

“A majority reelected Obama knowing full well that he would work to implement ObamaCare.”

And with no earthly idea what was in Obamacare beyond the lies told them by the used car salesman in the White House.

Henry Hawkins: And with no earthly idea what was in Obamacare

Or the farm bill. Or the tax code, or the building code, or how prescription drugs are regulated. That’s the nature of representative democracy, surely the worst form of government—except for all the others that have been tried, of course.

This my a call for a “Legal Insurrection” after all 🙂

Ignore this unconstitutional law, if enough people civilly disobey this travesty of legal and political maneuvering, we ought to be able to defund and nullify it.

The haphazard implementation of “The Affordable Health Care Act” (Oxymoron anyone?) means that it can be effectively argued that it is in violation of the 14th amendment’s equal protection clause:

By any constitutional measure, this law and it’s implementation FAIL.

“3. Con-artists are taking advantage of the confusion.” That’s just the Free Market at work. Caveat emptor, baby, as they empty your wallets.

The “Con Artist-in Chief” has taken advantage and designed the confusion . . . . I could swear I saw that guy hustling 3-card monte on Lexington Avenue by Grand Central. Did anyone else?

It’s a tax. It raises about a trillion dollars. And, takes away all privacy from Americans. And, just more information to data mine. Which proves our 4th Amendment got cut out of our Constitutional guarantees.

Not to worry. No law professor stands up in academia and shouts out the truth. (They don’t want to die from attacks they’d get from other academics.)

Will “constitutional law” still be taught? Why not. There’s gonna be a parade of tests for everything.

While both sides! Republicans and democrats. And, journalists. And, lobbyists. Are all at the trough. Money, to the tune of a trillion dollars, brings out the worst this country has to offer.

I don’t blame Obama. I knew he was incompetent. I knew in his hands, stuff would leak, and become more obvious. And, then along came Ed Snowden.

If you want to read news, go to Drudge, and use his link to the UK’s The Guardian. And, to his link to the English language Der Spiegel. The German’s are ahead of us when it comes to a free press.

No way to fix what’s broken, now. Obama’s “ObamaCare” has support from both sides of the aisle. And, about a trillion dollars in new taxes. Penalties. And, fees.

Soon, if you don’t work for the Federal government in some capacity, you won’t have a lob.

Including ones where you thought you could be paid “under the table.” What’s ya gonna use, a mattress?

[…] is a gross violation of privacy, yet many of those who support this still claim that a persons “right to privacy” […]