This one was taken at a trader’s joe in Owings Mills, MD…

I don’t know if you are the winner. Does this count? 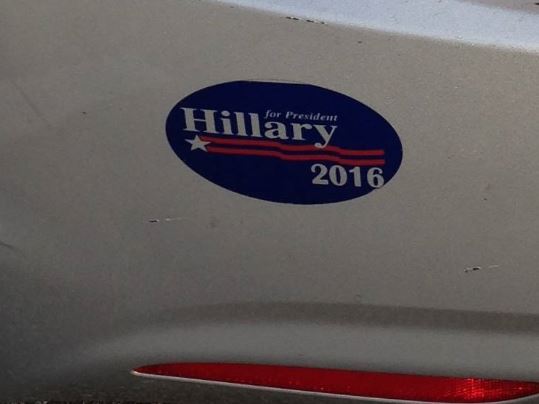 Does it count? What a question bot a “Noacount” candidate!

Boy, some people like to be lied to and to be ruled by power-hungry no-accounts.

Can she build momentum from her base of female boomers and naive feminist studies majors?

Barring an act of God, Sec. Clinton is the next President. Women voters will not wait any longer.

Rev. Wright was correct: the chickens are coming home to roost.

There’s just one little fly in the ointment…Michelle Obama. If Mooch decides she want to stay in the White House “prison” for another eight years, Barry will pull out all the stops to get her elected. He’ll jerk the rug from under Hillary without blinking. The Obama fraud machine will go into high gear. 2008 will look like a love-fest by comparison.

Bill Clinton, supposedly the savviest pol of all time, is a fool to keep doing Barry’s bidding in the belief that Barry will return the favor.

Barry has no loyalty to anyone except himself.

I don’t see Mooch running for president. However, I do see her following in Hill’s footsteps by running for Congress, then being appointed to the Cabinet and THEN running for president. Maybe that’s what Obummer and Bill are doing. A quid pro quo where Bill supports Obummer, Bill & Hill help Mooch when she’s running, and then appoint her to Hill’s cabinet. That gives the Mooch 8 years to get the kind of experience on her resume she will need. Not sure being a lawyer and hospital administrator are enough, oh wait, never mind.

That’s a pretty scary scenario that you paint but thank gawd, I won’t be around to see it…

Old age does have it’s benefits!

Not sure of the point here in regards to Michelle running for Congress – Hillary! had no real credentials before she was able to buy the NY Senate seat at least partially through the sale of Presidential Pardons. But, then, a lot of Members of Congress don’t either (for example, her senior Senator has never had a private sector job, moving from law school to NY legislature to the House, and then the Senate). And, this isn’t unique to Democrats – Mary Bono’s credentials were that she was married to a Congressman at the time of his death, and his credentials were that he was famous from being married previously to Cher.

Demanding someone have “qualifications” is racist and misogynist.

“Qualifications” is a construct of the white male patriarchal system of oppression which has kept women and people of colour down for centuries.

Obama and Hillary! are inspirations to all the millions of completely unqualified women and people of colour because they send the uplifting message: “You don’t have to be smart or hard working or study or actually accomplish anything. You are valuable just by being you, and you can live in the big house, too!”

Part of this breaking-down-of-white-patriarchal-barriers is being wrought by ObamaCare. The flight of physicians into retirement or specialties has left a growing shortage of general practice doctors, so HHS is allowing nurses to perform many of the medical procedures instead. After all, why should you have to go to medical school just because some OLD WHITE MEN say so?

Too bad! I didn’t know we were having a contest. I’ve seen maybe three or four of hem already.

Hillary has all the charisma and personality of a potato to augment her record of no positive achievements and a long list of negative resume items that begins with getting fired for lying during the Watergate hearings and ends in Benghazi.

If she runs and wins in 2016, it won’t be on her own merits. It will be because the GOP decided for a third time in a row to ignore its conservative base and nominate a moderate marshmallow judged to be the most ‘electable’.

In other words, she is a shoo-in.

I really do hope that Hillary! runs for President. It is her turn, and I just don’t see her winning. She has more baggage than an Amtrack train, starting with her being thrown off the Watergate prosecution for ethical transgressions (and we find that that team engaged in their own ethical transgressions, implying that what she did was even worse), through all the corruption she was involved in in Arkansas, FBI files, Vince Foster, HillaryCare, selling pardons for convicted terrorists and bank embezzlers, absconding with the White House silver on the way out, and then selling out to the Muslim Brotherhood while Secretary of State, letting four Americans die in Benghazi, and then lying about it. She has no charisma, will be tied to Obama and his failed economics and foreign policy, and will be nearing 70 in the next election – at a time when the youth vote is a good part of why Obama won this last election. How many of these young adults are going to be overly excited by someone who could be their grandmother? Whomever the Republicans run is likely to be a generation younger than she.

Of course, making things even more interesting, Slow Joe seems to be getting ready to run too. Just as old, and just as unaccomplished, except on the public dole most of his adult life as a politician. He trades his vivid imagination, fabrications, and tall tales for her corruption (not that he was clean, just maybe a bit cleaner). Not likely to be a lot of oxygen left for any serious younger candidates.

All good, except for the Amtrak reference – ain’t no baggage on empty trains, lol.

As for Biden vs. Clinton, he is far more accomplished than Clinton, though that leaves enough room to still be fairly unaccomplished. But, comparing himself to Hillary in a putative primary battle, Biden can point to six reelection victories as a US Senator, during which career he chaired both the Foreign Relations Cmte and the Judiciary Cmte. He spearheaded passage of the Violent Crime Control and Law Enforcement Act and the Violence Against Women Act.

This compares to Clinton as First Lady (Hillarycare!), Clinton as US Senator for 8 years or so during which she accomplished… nothing. She accomplished nothing in the Senate. Then it was off to Sec of State, where her record is extremely vulnerable to campaign criticisms.

I hope they both run. A long Democrat primary season of Hillary vs Joe, with each forced to put lipstick on their careers under Obama, ought to make the country so damn sick of both, and of the Obama terms, that they’ll cancel each other out, and some Democrat uber-lefty will sneak into the nomination to run a McGovern-quality campaign.

I think that you must admit that Slow Joe Biden in the White House would be interesting. He seems to live in a separate reality, and probably has for some time, though it may be getting worse.