We have addressed before the absurd attempts to turn Trayvon Martin into a civil rights icon equal to Emmitt Till.

On this anniversary of the famous “I have a dream” speech, the effort continues to an even new depth.

"Trayvon Martin Luther King Jr" shirts for sale at a rally for the #MOW50 http://t.co/7McrArHaYt 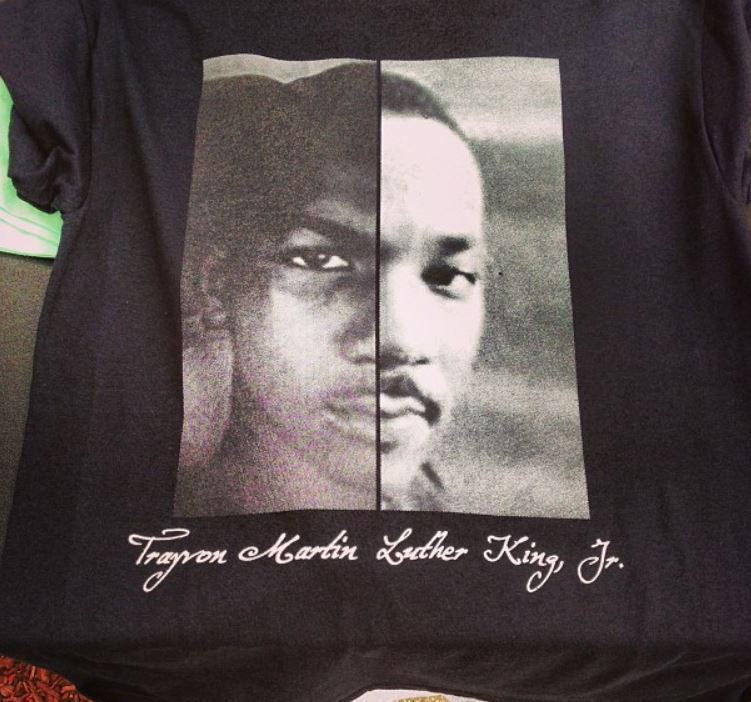 Becoming an Icon Of The Race Struggle boils down to the coincidence of having within your name either King, Luther, or Martin.

A fraud upon a fraud. The fraud of Trademark Martin being a sweet little boy being piled upon the fraud that MLK was.

A perfect circle drawn by black America and their puppetmasters.

The ultimate goal of their agenda here is, rule the U.S.A. AND with assistance from their REAL Masters, the Left.

MLK was willing to face the consequences of his actions. Trayvon assumed he did not face any consequences and his error was tragic.

It would be interesting to hear one of these “civil rights” leaders describe with specificity exactly what contribution they believe Trayvon Martin’s death has made to the civil rights movement.

Martin was killed while in the process of committing a vicious assault and battery on a man who had looked at Martin in a way that Martin found disrespectful.

So what “civil right” was implicated in the confrontation between Martin and Zimmerman? The right not to be looked at in a way that offends one’s sensibilities? The right to beat up any person who looks at one in a way that he/she finds offensive?

This morning on Today Al Roker interviewed MLK III, who stated that Trayvon Martin had been racially profiled.

So? You can find people who would say he was abducted by aliens, too.

Al Roker is a TV weatherman who thought it necessary to share with the world, on national prime time television, the fact that he sharted himself at the White House.

He’s an authority on what, exactly?

and the results deserved!

Sharpton, Jackson, the NCAAP, et al, have reduced themselves to irrelevancy as a result of serving as little more than paid mercenaries for the Democrat Party.

It appears that the old slogan for the Negro College Fund, “A mind is a terrible thing to waste”, was not heeded.

Probably because “The mind” aspect of it is a rebuttable presumption.

I guess that all this shows the corrupted brainwashing that the likes of Jackson, Sharpton and others have inflicted over the years. Now they’re joined by the likes of the anointed one and Holder who have even more negative influence.

Instead of following a path of assimilation, we have been driven down the trail of accommodation where no one benefits.

So here we are with not many options left..

Picture this: Martin slamming Zimmerman’s head against the ground where a puddle of blood forms, while Obama praises his child with a gentle pat on the head, and the usual cast of civil rights leaders standing in the background in various stages of fist bumps.

And to complete the scene, a dejected MLK standing apart from the mob, holding his head, showing an expression of shock and disbelief: I do not support acts of retributive change.

Obama had a son, he’d look like Charles Manson?

So MLK has been reduced to the status of a violent druggie thug with liver problems from his drug use.

A mind is indeed a terrible thing to waste, and the mind that processed that devolution of MLK is totally wasted.

This will not end well for the Democrat Party.

More and more are thinking this way.

“As a Democrat, I am disgusted with President Obama
I voted for Obama reluctantly, but never did I imagine he would become another Richard Nixon…” – Jeff Jarvis

So, any minute now, the “real” civil rights leaders–you know, the real victims of racial discrimination, that rose from the ashes to found a grassroots movement to establish equality under the law–will start screaming from the hilltops at this perversion and co-opting of a cause that was noble, just, and principled…

If not, if NO ONE fundamental to the Movement in the ’60’s speaks out against this..

What are we to think of the Civil Rights Movement?

Treat it like a Bowel Movement: wipe, flush, wash our hands of it, and get back to work.

So Gawker.com has finally covered the Oberlin hoax, but without identifying the students who did it:

Up For Sale, is not the same thing as the “ubiquitous hoodie.”

And, whites aren’t blacks major problem. The problem is all the other American ethnics who have opinious they don’t share.

In other words, if you were to try to “teach this new take on MLK, Jr., first you’d discover blacks don’t know who this is from a hole in the wall. And, all other groups hold blacks in contempt. There are places you don’t even see them hired to be gardeners.

It’s one of the reasons black unemployment runs at something like 40%.

You are right. Many foreign born also hold a negative view of some American blacks.

The People Who Know What’s Best For Us have been referring to the likes of Jesse Jackson and Al Sharpton as “civil rights leaders” for more than forty years now. It should be no surprise that there are now those treating a thug like Trayvon Martin as a civil rights leader. At least, unlike Al Sharpton, Martin didn’t, as far as I know, do anything that got anybody killed.

I may have posted this here before, and if so, I apologize for being repetitious. But, I was really proud of it!

Now I lay me down to sleep,
I pray the Lord my soul to keep.
And IF my liberal friends get mugged,
Please let it be a young Black thug!

So when they get a busted snout,
And all their brains are running out,
They’ll gently go to those good nights
As Champions of Civil Rights!

I heard it when Obama said in his MLK speech today “Because they marched, America became more fair.”

He inspired me! To sign up for the cause!

On a Treyvor / MLK / Obama note, why isn’t … like Zimmerman’s tag line .. the prez. referred to as “a white African-American?”

“On a Treyvor / MLK / Obama note, why isn’t … like Zimmerman’s tag line .. the prez. referred to as “a white African-American?”

The lib media, of course, merely took advantage of this system in order to turn GZ into a White Man for lib agenda reasons.

Ergo, IN this system…. argh.

Another example: Prof J would be listed as White Non-Hispanic on government forms. (And GZ would be further ID-ed as White Hispanic, Cuban origins, or Mexican origins, etc.)

On the Florida driver’s license application, “Hispanic” and “White” are two different boxes. I’m pretty sure I remember hearing that Zimmerman had ticked “Hispanic” and NOT “White” on his.

What GZ ticked is irrelevant to the media. They need white bad guys. If Obama were GOP, they’d call him white.

“On government forms, Obama can pick white or black, but not both.”

Starting with either the 2000 or 2010 census, you could pick both black and white (or Asian and white, or white and “some other race”) – they started counting mixed-race citizens. I have family members with a white mom and a black dad, and they tick both boxes. Some militant black activists don’t like this development, because they want everyone with even one drop of “black” blood to represent as “black”, kind of a “power in numbers” thing I think. But a lot of people don’t like being forced to basically disown half their racial heritage – it’s like “are you siding with mom, or dad”?

“However, ‘hispanic’ is considered an ethnicity, a subset of ‘white’.”

It’s even goofier than that. To the govt, Hispanic is a direction; south of the US. That’s how we get native English speakers from Belize or Trinidad, native French speakers from Haiti, and native Portuguese speakers from Brazil all lumped into one pile as “Hispanics”.

The fact is, government generally doesn’t do things terribly well.

Tell me about it. Both my personal professional certification and business license are from state government and it is a nightmare of bureaucracy and arbitrary bullshit.

These people can’t even keep their demagogues straight.

It’s hard to do when one lie as much as the left.

[…] As LegalInsurrection notes: “The depth to which the ‘civil rights’ movement has fallen in one image.” […]

The cream of the jest is that Martin Luther King, Jr. and Abraham Lincoln were both republicans. It was republicans who freed the slaves in the civil war. It was republicans who forced the civil rights act into being. Yet these idiots the repulicans saved worship the shrine of people who opposed all this. All this talk of reparations and slavery are just words that mean nothing. The only thing these people want is more freebies on the tax payer dime and will support the party that gives it to them.