All the media attention has been on Egypt the past few weeks.

But Syria continues to implode, with death and destruction everywhere.

The latest is the mass exodus of civilians. 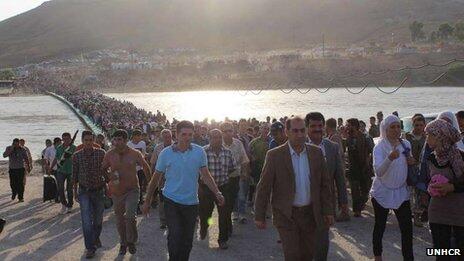 BTW, wounded Syrians are being treated in hospitals in northeastern Israel. If I understood the news report I saw in the doctor’s office last night, they only ask their name, and their fathers’ and grandfathers’ names. After all, what would be the point of asking who they are fighting for – they’re probably all our enemies.

I would love to know who put a negative on the comment.

Looks like a target rich environment. Where are our drones when we need them?

If these are the more level-headed, possibly the more productive, at least potentially, then Syria lost a million of the people it needs most. They’re not likely to go back.
Gonna be a hell of a job taking care of them.

That’s one helluva life choice these people made.

Every individual made a personal choice to leave everything behind, and walk.

In this country, we are told it is a personal crisis to each and everyone one of us that that Sandra Fluck has to pay for her own birth control pills.

Does anyone have any data on ethnic background of those crossing into Iraq/Kurdistan? If Kurdish, they will provide additional boost to Kurdish independence.

Hard to do from a refugee camp. Especially if the West turns a blind eye.

They look middle-class. Now, they have no money, no job, no influence.

I wish them the best of luck. They’ll need it.

I haven’t seen any news about the ethnic background of the refugees crossing into Iraq, but most of the news reports say that the migration is in the northern Kurdish region. Most of the border crossings from there go into the corresponding Iraqi Kurdish region; there is one official crossing in Anbar province. The border is not as porous as some believe; the Iraqis do patrol it.

If the refugees are Kurdish then they’ll be well taken care of by their cousins in Kurdish Iraq. Some news reports say that is already happening, and that the Kurdish autonomous government have vowed to “take care” of the new refugees.

What worries me is whether the Iraqi Kurds will respond to acts of genocide in Syria against the Kurds. The Peshmerga is a pretty decent fighting force, and “volunteers” from Iraq coming into Syria could complicate things substantially.

Fleeing to Iraq; imagine. Iraq, where all the hard, dirty work had been done; Iraq, where stability and peace were so close, a presence so much of the time, for so many; Iraq, whose president was being personally counseled by our president every week, by phone, even after our “mandatory” draw down; Iraq, immediately upon taking office abandoned by our Nobel Laureate Peace President, a man with no idea what to do then, no idea what to do now and, in any event, lacking the faith and courage to do something anyway.

A great portion of responsibility for the carnage, rubble, and wreckage in the Middle East is yours, President Obama; you own it. The entire world will be better off and safer after you retire to Penny Pritzker’s beach house in Hawaii.

May of these new refugees are Syrian Christians being herded out by al Qaeda sympathetic Islamists.

Haha. UNHCR propaganda . Love the 20 something girl getting on the truck with her designer handbag & strappy sandals.

Suck it up Iraq.

They should all head to Obama’s and Clinton’s houses.

Announce to these beggars that Syria will attack Israel tomorrow and you’ll see them rush back into
Syria for weapons to go fight and plunder the Jews. They’ll kiss each others asses,(no metaphor–really, kiss each other’s asses) and make up in no time flat!!!

On the other hand, are these possibly the NEW PALESTINIANS?

The head of this snake is Iran. Syria is their client state. I knew that much of Egypt objected to the MB, but was surprised by the strength of that opposition. Iran was a modern, western leaning state prior to 1979, and we saw an attempt to throw off the fundamentalisy monkey in their failed Green Revolution (despite Obama’s heroic efforts to support…, oh, wait. Never mind.).

The point is, Iran is ripe and I believe willing to unburden itself, maybe moreso now watching Egypt do it. Iranians were better educated and employed. Pull that pin out of the mess and Syria and Lebanon are dramatically different. Cultivate Egypt’s desire to be self determining, hold the Saudi’s feet to the fire over funding extremists in exchange for them leaving Saudi Arabia alone, and b’gosh, there MIGHT be some hope over there.