Protesters have gathered outside the White House to oppose intervention in Syria as Obama takes the podium.

Protester chants of "Obama, hands off Syria" can be heard in Rose Garden, where Obama about to speak on #Syria

Protesters in front of the White House, moments before Obama speaks on Syria. pic.twitter.com/KkWYJ6RO3p

Aside from just the typical and always expected ANSWER Coalition anti-war protest crowd, who are publicizing demonstrations across the country, seems like an interesting mix of some others as well. 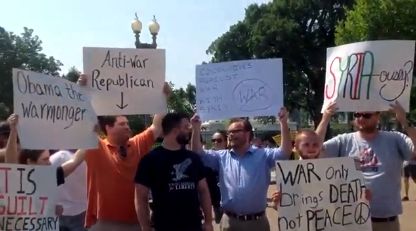 (still shot from video above)

MANDY THANKS A TRILLION FOR THIS!

Cause the drive-by-lie-stream-media won’t show it – odds are.

Only “legitimate” debate will be covered.

Thanks for the big laugh Jerry!

“Mr President, how many days will the bombing last?” “FORE!”

Very wierd – there are good reasons for keeping hands off Syria, but in San Diego today, the protesters are comprised of Lyndon Larouch cultists and separately, occupy wall street zombies who seem – between bong hits – to firmly believe that the Syrian action is at the behest of the “bankers”

The only thing that rings true to me is what Wbboei from Hillaryis44 says:

They see a potential to make vast profits, with the losses born by the American People.”

Oops. I negated my own comment. That’s what I get for having a small tablet and big fingers.

Don’t u think that the world now knows that America no longer belives in God?
Look who is leading this country? A spineless bureaucrat with golf experience.

Sounds like the WH, through its front organizations, organized the “protests” outside the WH.