If you can't connect to http://t.co/SzEQTqHIZB we are also publishing at: http://t.co/XFJ9he7Yt0 We'll tweet links to the latter site.

Here’s the image I got when I tried to access it, ironically referencing a prior NY Times story about how it was hacked: 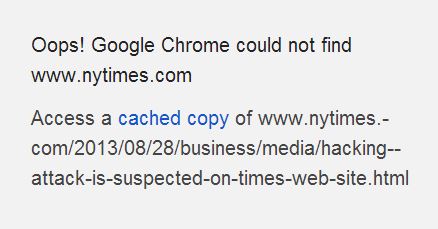 As an outage of the New York Times website stretched into its second day Wednesday, evidence continued to mount that it was the result of an attack by the Syrian Electronic Army.

The group, loyal to Syrian President Bashar Al-Assad, has been behind multiple attacks on media websites in recent months and, on Twitter, took credit for a sophisticated hack that had hobbled the news site for roughly 20 hours.

“The @nytimes attack was going to deliver an anti-war message but our server couldn’t last for 3 minutes,” the group posted on its Twitter feed at about 9:40 Wednesday morning.

Update: The SEA apparently wanted to place an anti-war message in place of the NY Times website, although it’s unclear if that was today’s or yesterday’s attack:

I am able to access the NY Times website directly from the IP address at http://170.149.168.130, so the issue today may be related to the DNS propagation after yesterday’s attack.  Melbourne IT made changes to fix those made by the Syrian Electronic Army, and those can sometimes take from hours to a couple days to take effect.

Maybe all of their computer networks, and software were written in-house by journalism majors.

copy on the righteous indignation !!

The Obama-supporting New York Times clearly needs to draw a red line on this.

This is not affecting me in the least. I try to access the NYT as little as possible. If I want news, I head elsewhere; if I want opinion, well, I don’t care for the NYT opinions laced through every paragraph….

The Ops team is just like their Editorial team, full of Jokers.

I just did a DNS lookup on nytimes.com. The result? Host nytimes.com not found: 3(NXDOMAIN)

Yes, it was DNS – we covered the DNS attack here yesterday: https://legalinsurrection.com/2013/08/syrian-electronic-army-media-is-going-down/ (also see the note at the very bottom for link to an end of day synopsis)

Today’s issue is the DNS still propagating after Melbourne IT (the registrar SEA targeted yesterday) changed the records back.