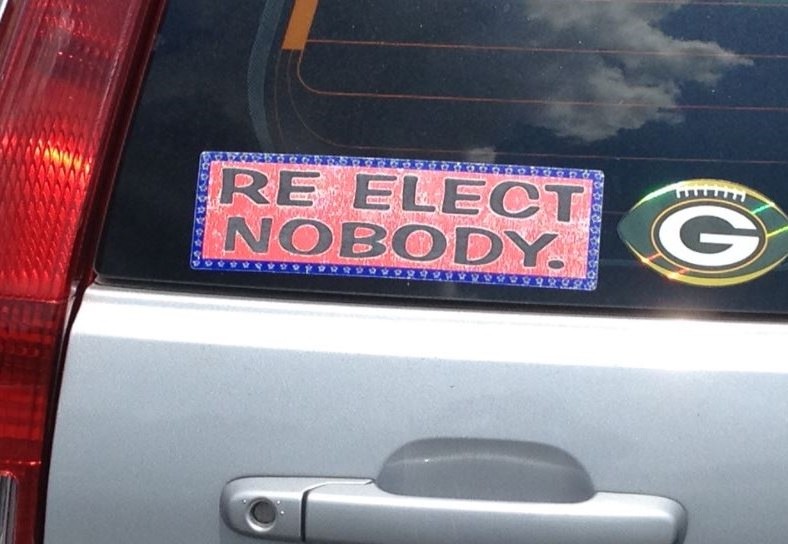 Amongst my friends and family with whom I converse about these things, there is a building consensus of anti-incumbency. Having long ago given up on the Democratic party, we viewed the Republican candidates forced down our throats as the only alternative to the dire predictions brought forth by the Republican Party each election season. So, we have held our noses and voted for the Republicans, only to see them, once elected and secure for another term, follow the Democrats, the big government statists and the big money lobbyists, comfortable that there was no where else to turn to.

What good does it do us to vote to protect the majority in the House or to vote for a Republican majority in the Senate, if the agenda of the party is being set by Senator Schumer?

The owner must be a transplant from Wisconsin. The G inside the football is in Packer green and gold. If it was for the Bulldogs it would be black on white with a bright red border.

It’s not quite so much that Obama’s agenda has been enacted, as they are in majority in only one house, it’s that they DIDN’T FIGHT TO STOP IT.

And they DO/DID have the ability to STOP it.

And not only that but that they have stood by and watched Obama usurp what little power they have without doing or saying much.

I don’t mind my team losing but I do mind when they’re throwing the game. (or appearing to do so)

John Boehner will go down in history as the worst Speaker of the House in decades and maybe even get a place alongside Benedict Arnold for the most clueless traitor ever.

Boehner is secure in the knowledge that he has a generous retirement pension with a cadillac health plan and will seamlessly transition into a lobbyist position at a salary most of us could only dream of, when he retires from Congress, whether by his own choice or not.

Dems and Repubs are two sides of the same filthy coin. Both are driven by a tax and spend mentality, just differing on what to spend our money on. On the local level, our little county elected a small government guy as a county commissioner. He’s not perfect, a little quirky, but that’s politics. He is being savaged in the press for trying to pull in the reins on spending.

It seems there’s always an element that promotes the Ross Perot adage “Time to clean out the barn,” but it seems to go nowhere when the reality hits the voters that part of the solution is a cut to the trough of entitlement that they’re drinking from. Then, it’s hold your nose and vote for the lesser of two evils.

As WFB put it so well: “I’d rather entrust the government of the United States to the first 400 people listed in the Boston telephone directory than to the faculty of Harvard University.”

We can do better than what we are doing.

A Packer fan in Mayretta?

They are all crooks and thieves.