San Diegans have been gathering together for a number of events with Mayor Bob Filner as their central theme.

However, the messages for Filner, who has now been accused by 16 women publicly of sexual harassment,  have been strikingly different. 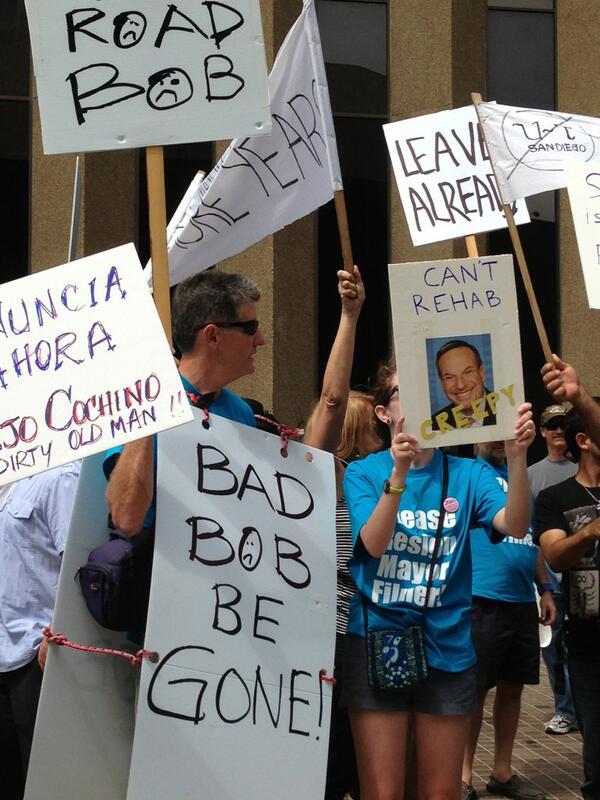 This past Sunday, hundreds gathered by City Hall for a “Freedom from Filner” rally that kicked off the recall petition drive:

The effort to recall embattled San Diego Mayor Bob Filner officially kicked off Sunday, as petitions were circulated at midnight and volunteers worked at a trio of three daytime civic events.

About 250 supporters rallied at City Hall Sunday, chanting “throw Bob out.” Recall organizer Michael Pallymary said thousands more were at a Mission Valley hotel being trained to gather the petitions.

“It’s been overwhelming, it’s been non-stop, look at this crowd,” Pallymary told City News Service at City Hall. “At the Half Marathon I personally got more than 100 signatures in an hour and I couldn’t get them down fast enough.”

…”This march is for the people to send a message that Mr. Filner must immediately resign or be removed from office,” said rally spokeswoman Kathryn Vaughn, a San Diego attorney and workshop leader on sexual harassment in the workplace.”San Diego deserves to have a leader with honor, integrity and respect for all people. Bob Filner’s appalling behavior will not be tolerated and is unacceptable for our city’s leader.”

On the other hand, about 80 Filner supporters gathered Monday for a press conference that bordered on the absurd. The song, “We Shall Overcome” was featured as an homage to Filner’s past as a Freedom Rider. One supporter actually insisted that because she never got “sloppy kisses” the mayor should continue in office:

“I do know that Bob is fussy … but he’s also fair,” Filner supporter Maxine Sherard added.

There has been a little blue vs blue action as a result of Filner’s activities. The Socialist Workers’ Party website has a detailed summary of all the news about the mayor, and calls out the unions and a popular progressive blog on their hypocrisy (hat-tip, W.C. Varones):

On the liberal OBRag website, one shameful, dismissive apology piece amounted to asking San Diegans why the women in the mayor’s office couldn’t just take one for the team in the name of progress. “Are we in for a decade of Republicanism delivered by Democrats in name only?” questioned writer Bob Dorn, while suggesting that the charges against Finer were part of a “set-up.”

……It appears now that only establishment union leadership is unwilling to demand the mayor’s immediate resignation. The San Diego and Imperial Counties Labor Council, with affiliate organizations representing 200,000 workers, has issued only a vague statement calling the allegations “serious.” The head of the San Diego County Building and Construction Trades Council, with affiliates representing 30,000 workers, is standing by calls for “due process” for Filner. Business Manager Tom Lemmon told the San Diego Union Tribune, “It’s an awkward situation, but we have a lot invested in him.”

I signed the recall petition today, and from reports from petition gatherers indicate that San Diegans are very eager to sign. Hopefully, the enthusiasm will inspire the mayor to resign during upcoming mediation sessions led by City Attorney Jan Goldsmith.

I hope he doesn’t resign and has to be dragged kicking and screaming from office.

….volunteers worked at a trio of three daytime civic events.

Does this writer know the relationship between trio and three? /s

Filner, what a disgusting, vile pig; that the establishment is tacitly trying to excuse his behavior in order to maintain a democrat in office should alarm moderate Democrsts and just HORRIFY the citizens of SD. A clear signal that politics and maintaining office is the holy grail and having respect for the office/citizenry means diddleysquat. What happens if he is recalled…is a new mayor appointed, elected? If he is recalled, does he lose his benefits? Would he go to trial, if a criminal/civil suit is filed, and then lose benefits if he is found guilty? If he voluntarily steps down, maybe the benefits are withdrawn?

“Can’t rehab creepy” is one of the better hand-drawn signs I’ve seen in a while.

You ever get the feeling Filner was only a “Freedom Rider” because it was the hip thing for northern liberals to do and he thought it might get him laid?

Oh, the citizens of SD are horrified, all right. I will be signing a petition at the first opportunity.

What I really want to know is, why the Democrats ran this jerk in the first place? Contrary to what some people are saying now, this person is a known jerk. The allegations about his behavior to women have only become public recently, but there were rumors before the election, and the party people had to know.

Have the Democrats nobody else to run, in the whole party? Really?