I haven’t written much about Harry Reid lately, although we do have over 100 posts in the Harry Reid tag dating back to the earliest days of this blog.

Who can forget his famous pronouncement that the Iraq war was lost and the surge had failed? He then worked as hard as possible to make it so:

Or when he called David Petraeus a liar? 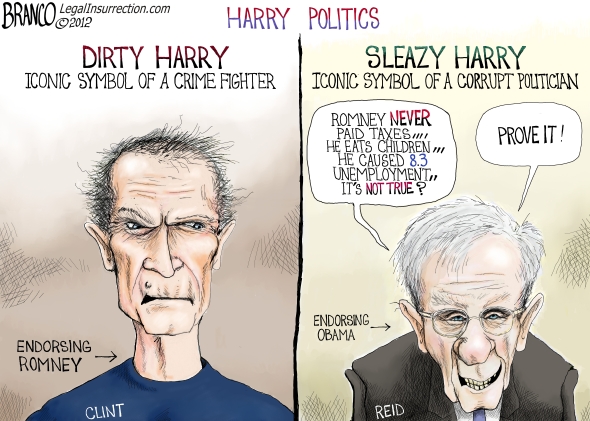 This is not the first time Harry has been on the Saturday Night Card Game:

Le miserable one is back, “hoping” that Republicans aren’t just a bunch of racists for opposing Obama’s policies:

I’m sure it’s not Harry’s last visit, either.

I see those Barrett’s esophagus ads on the tube and it strikes me that Dick Smothers is as good a doppelganger for Harry Reid as he was in “Casino”, if not better.* All he has to do is suit up and eliminate every last bit of his good humor and charm.

Because Republicans have a long history of supporting the socialist, race baiting, economy-destroying policies of WHITE Dem presidents. So: racist!

“light-skinned” African-American “with no negro dialect, unless he wanted to have one.”

Stuffing Harry in Yucca Mountain, a great idea IF the nuclear waste did not object.

I think that “Zip’s” coinage of “Dingy Harry” has taken on some national prominence. “Sleazy” sure was accurate though.

Reid represents everything that is wrong with American politics..

Dingy Harry…what else can you say?

Tell me one thing, Senator Reid, and only one:
How does a man go from Horsedung, NV to to Washington, DC with less than three hundred thousand and become a multi-millionaire on a Senator’s salary?

Maybe CNN/NBC can do a mini-series or documentary on that story.

There is the very funny Remus Reid story..