A couple of trolls want Israel’s name removed from Google Maps and decided to express those sentiments by defacing the ‘Google Palestine’ search home page.

Google.ps, the Palestinian version of Google’s web search, was hijacked and redirected to another web site for some time Monday before being restored to its usual default page. 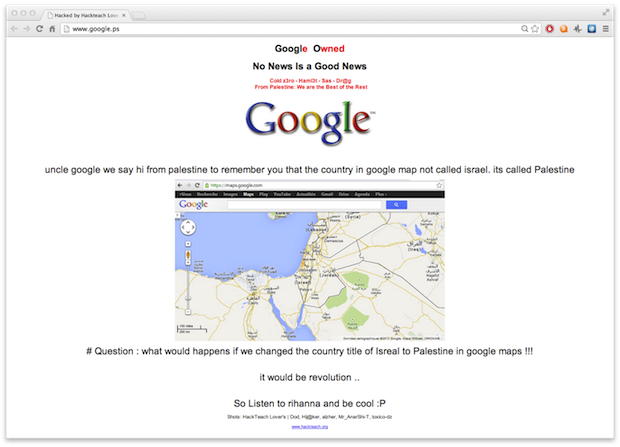 The site to which users had been directed displayed a page with a message that read, “uncle google we say hi from palestine to remember you that the country in google map not called israel. its called Palestine”.

The page also contained a screen shot of a Google Map of the region, followed by the text (as it appeared), “#Question : what would happens if we changed the country title of Isreal to Palestine in google maps !!! it would be revolution.”

It concluded with, “So Listen to rihanna and be cool :P,” and was signed by several individuals identifying themselves as Dod, [email protected], alzher, Mr_AnarShi-T, and toxico-dz.

ZDNet described the details behind the incident:

The attackers were able to deface the site with a successful DNS hijacking attempt. In doing so, the Google homepage was redirected to a Morocco-based server. We also checked with the WHOIS provider of the Palestinian top-level domain name (.ps), which confirmed that Google.ps remained under the ownership of Google U.S. in Mountain View, California.

The main Google logo image was directly linked to a Google-owned domain. The Google Maps screenshot was hosted by a third-party Arabic image and file sharer, known as GulfUp. Also, users were prompted to accept a RealPlayer plugin — a Web extension scarcely used nowadays — which was used to play a Rihanna track.

A Google spokesperson told ZDNet that the site had not been hacked, saying in an email, “Some users visiting Google.ps have been getting redirected to a different website; Google services for the Google.ps domain were not hacked. We’re in contact with the organization responsible for managing this domain name so we can help resolve the problem.”

Google sparked harsh criticism in May when it changed its Google.ps regional search page from “Palestinian Territories” to “Palestine.”  Israel’s deputy foreign minister urged the search giant in June to revoke the label, citing politics in Google’s decision.

“We do not think that a large and respected company like Google, which deals in technology, should enter the arena of policy making,” the deputy foreign minister said at a Knesset Science and Technology Committee hearing. “The Israeli stance in the matter is well known — a Palestinian state, if established, will be the result of direct negotiations with the Palestinians,” he said.

Trolls, being what they are, would apparently like to make their own rules.

Alternative (and more believable) explanation: The GovernmentOOGLE site wasn’t hijacked – just replaced by the one GOOGLE leftists use internally.

Just FYI: The NY Times is down, hacked by the Syrian Electronic Army? The WSJ is still working for me, but some people are reporting issues with it as well. See Twitchy:
http://twitchy.com/2013/08/27/new-york-times-twitter-wsj-hacked-syrian-electronic-army-suspected/

Israelis should be extremely proactive on stunts like this. There is a huge movement afoot to rewrite Jewish history and make it Islamic. In doing some research this past weekend, I found a site that claimed Mohammed, the Perv, was mentioned in the Song of Solomon 5:16 because of the use of a Hebrew common noun which happens to sound close to his name. Thus, the grammatically challenged seek to rewrite history, even as they are appalled by the content of the Song.

PS: For those who declaim us grammarian liars [I repeat myself; all grammarians are liars because there are always exceptions to the rules], it is by strict analysis of grammar that we can dismiss dubious claims such as the aforementioned and ensure that the historical and literary record is not tampered with by genocidal maniacs.

And on our side, people are so anxious to get Islam that the horrific persecution Jews suffered under Christianity (worse than under Islam, and that’s saying something) is covered up.

Isn’t it enough that the Pope conceded that the Church crucified the Jews? His term, not mine.

I expect this to get a lot of down votes. Doesn’t change reality.

Israel Isreal(as spelled on the google map), and its Jewish citizens all had passports marked Palestine, issued by the British mandate. So if Jewish Palestinians wanted to change the name of their homeland to Israel, that isreally cool.

So, you see, Israel is Palestine, is Ancient Judea, is Israel and Judah, is The Land of Israel, is Jewish. Period. Case closed.

I know. There is no difference between Jew and Israelite and Hebrew. In Jewish legal literature, Israel is almost always used for Jew. Palestine in Hebrew was know as “Eretz Israel”, see the copyright page of any book of the period. “Jew” in Russian is “Yivri”. The standard Aramiac translation for Hebrew is Jew. In Kings, the Assyrian rep calls the Hebrew language “Jewish”.

But go try telling this to the academics.

I think you missed the last point. ISRAEL objected to the site existing, saying it was a way of giving the PA everything they want with nothing in return. Land without peace.

Then some Arab nuts decided it wasn’t anti-Israel ENOUGH.

I wish some hackers on our side would attack the site.