From reader beloved2, while I was traveling in Israel late last month:

Our governor is the best kind of Zionist Christian. Spread the word .

Snapped this photo at a cemetery. 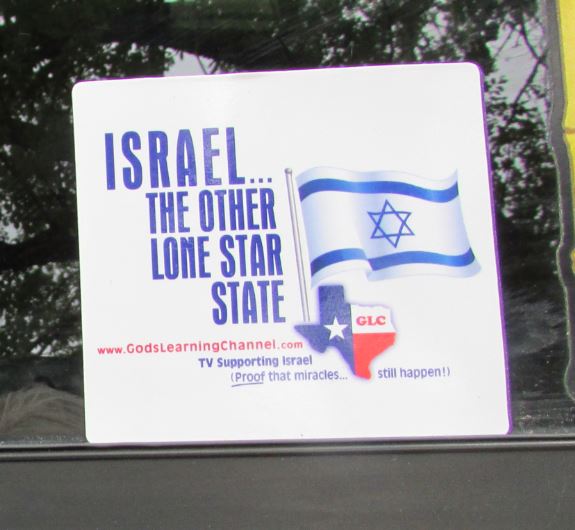 If I lived in TX – my vehicle would be sporting one of these.

Clearly they are both God’s chosen people.

Wonderful. The love of Israel by Americans (many of who are Christians) really is on a similar level as the passion and pride Texans have for Texas.

The commitment and pride is a part of who we are. We stand for similar values and are not embarrassed to have great friends.

Pretty darned cool….While it’s a lesser known chapter in Texas history, there were a number of ranches and settlements that were established by Jewish immigrants in the early 1800’s. Jewish business leaders were also prominent in the establishment and development of Texas’ vast oil basins. It’s fascinating reading.

Anyone who knows American history and the many religiously-based communities in our early history knows how often they modeled themselves after The Children of Israel as they started out to build their new communities.

From the earliest Founding Fathers to even their earlier inspiring church pastors Americans have often looked to our Biblical roots. We Americans are a people founded on an idea of liberty. Israel is a nation founded so Israelis could enjoy true freedom.

And what’s more American than Texas? Not much! Texas and that cowboy, do-it-for-yourself spirit and Israel’s we will rebuild here in Zion aren’t exactly the same song. But they are great harmonies to each.

Israelis have a problem with Bibi. It’s not as if a free press cures how the elites treat common folk. Same is true in Texas, which is such a big state you can divide it into five sections. A few liberal. More than a few conservative. And, some of it catering to Mexicans, so everything they hear is in spanish. (Nothing wrong with that!)

Israel, small in size as it is, is also divisible into sections. There’s an elite core, who manage to get to the driver’s seat in the knesset. And, the knesset elects 120 ministers … who’d sell their own mothers for a vote, here and there.

What’s the difference between democracies and monarchies? Well, in a monarchy there’s the “lucky egg.” But the lucky egg MUST marry another “carrier.” Commoners are usually forbidden.

Dictatorships? Oddly enough not that stable. More prone to assassinated leaders than you think. (You think Stalin died a natural death?) REALLY ??

By the way, a “life in politics” means sleeping in lots of hotels for years on end. Even when I was a kid, I remember how politicians, themselves, called where they were going “The Rubber Chicken Circuit.”

Not sure we get to pick from the best, anyhow. Because who has time to run these things, when you’re running a successful business?

Did you know there are more men like Reagan … but they’re running successful companies … They’re not into shaking hands so much. (While Dubya had someone who stood behind him with the hand sanitizer. AND, he also packed his own pillow, so he could get a good night’s sleep.)

While Tony Blair fell off the proverbial map! And, the Queen doesn’t invite him to “her” house! God save the queen.