Frustrated by NSA redactions? There’s an app for that.

Frustrated by NSA redactions? There’s an app for that.

It might not help you figure out what’s really behind those redacted portions of documents the NSA chooses to release.

But if you’ve ever been annoyed by those entire pages blacked out from view, at least you can poke some fun at it on your own time. 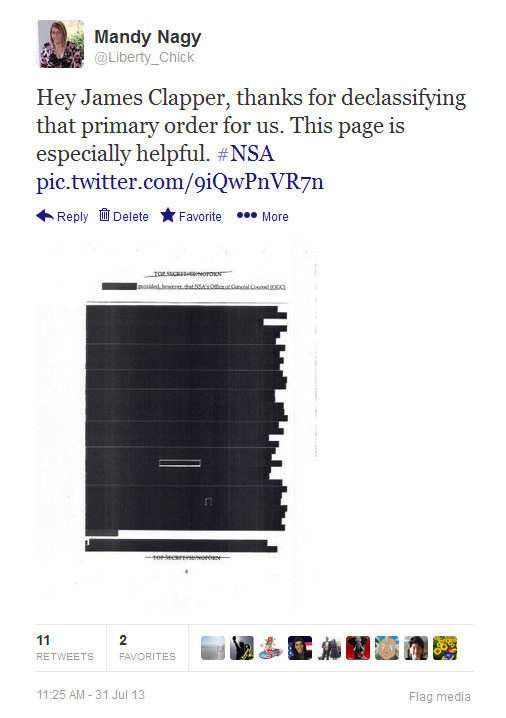 A new, text-based iOS game called Blackbar is an intelligent political statement on that secrecy. The player takes on the role of Vi, who is constantly receiving letters from her friend Kentry, a new hire at the “Department of Communications.” Each message you receive from Kenty contains portions of blacked out text that you’ll have to fill in to keep progressing through the game. These missing words, names, and dates are hidden because they’re “violations of department code” according to the game.

As The Daily Dot points out, it’s sort of like “Mad Libs for Internet freedom.”

But the fact that such a game exists actually highlights a serious point.

I’m very sympathetic to the need to redact certain information to protect secrets that are truly necessary in the interest of national security.  But maybe it wouldn’t be a bad idea to reassess how much is classified and redacted, especially given in this day and age when more information is publicly available.  It’s a debate that’s been in existence for years, and was brought to the forefront again after Bradley/Chelsea Manning’s leaks.  Amidst the NSA surveillance discussion, more in Congress seem willing to call for a review of the classification procedure.  By doing so, I think Americans would be more inclined to trust that documents that remain classified have good reason to be labeled as such.

I’d almost prefer a document not be declassified at all if it’s going to be almost entirely blacked out.  Because, well, that’s just teasing.

Meanwhile, if you’re interested in taking your redaction frustrations out in a more humorous fashion, you can download the Blackbar app for $2.99 in The App Store.

Who decides what gets redacted, and how much of what does, slides downhill from “national security” to “CYA”?

As Reynolds states (no doubt others)

“The country is in the best of hands”.

Left unstated is, what country is being referred to.

Some redactions are more equal than others, but you’ll never know which.

Anyone else annoyed by all the printer toner that is being wasted by the black bar redactions? Don’t they realize how many taxpayer dollars are getting wasted on ink?

Which also reminds me why you know that the Cartels aren’t into the drug trade just for the money – because if they wanted to make insane amounts of money, they’d start selling black market printer cartridges!

You can call him Bradley Manning.

Unless you’re entering into a legal contract with the dude (post-legal name change), use the name on his birth certificate, on his military ID papers, that perfectly adequately identifies who we are talking about, and under which he committed crimes against the U.S.

Submitting a document like the one illustrated is really a form of ‘dumb insolence’. Maybe – fond fantasy! – the submitters should be cited for contempt of Congress.