Dick Durbin earned the nickname Turban Durbin when he compared U.S. soldiers to Nazis in 2005, a verbal example of Godwin’s law:

As an online discussion grows longer, the probability of a comparison involving Nazis or Hitler approaches one

Snapped this pic at a red light on my way home from our struggling small business located in the suburbs near the belly of the Chicago beast.

I share the driver’s sentiment, as I suspect many do, but there never seems to be enough living and breathing voters in these parts to overcome “The Machine,” unfortunately.

So we get stuck with jokers like Turban Durbin… 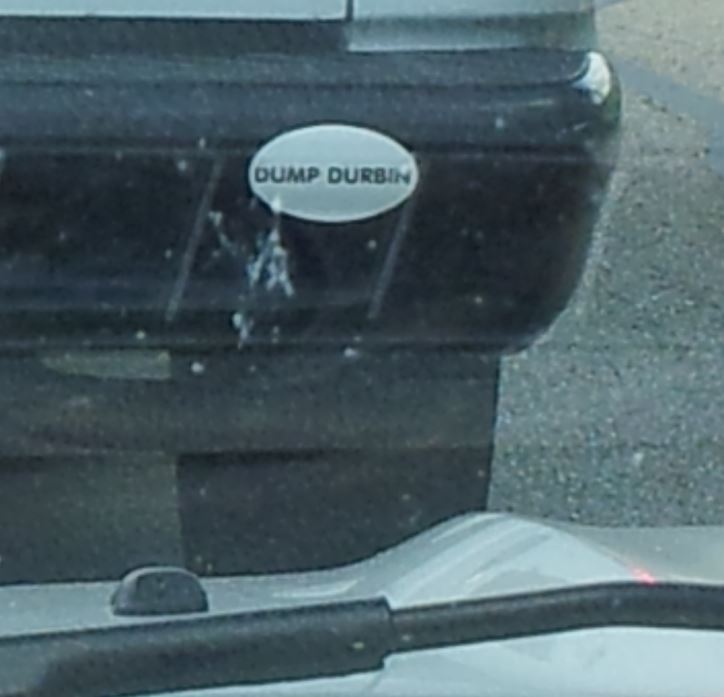 Godwin’s Law was invented by leftists to stifle any discussion of the philosophical roots of National Socialism. They don’t want to admit that their irrationalist and statist policies have put America onto the same path as the Weimar Republic. See Leonard Peikoff’s 1983 book, The Ominous Parallels: The End of Freedom in America.

Yes indeed, Godwin makes it possible for them to hide in plain sight. It may clean up some noise too, but the cost almost certainly exceeds that small benefit.

Oh, I had Godwin’s Law pulled on me when I wrote the Trayvonazi Song. Which is to the tune of Horst Wessel. But darn it, it just fits the Neo-Race Baiters sooo well.

Have you recorded it? I’d love to see it on youtube.

Thank you, It saves me from typing the same sentiment.

I don’t apply bumper stickers to my car but after seeing this one I just might. I need to find this one.

I heard the other night that my state of Illinois has the highest unemployment rate in the union.

This is due to the fact that among other IL self-aggrandizing Dem politicians we have a senator who babbles Liz Warren nonsense all day long and does nothing to encourage business here.

Egads, I hope he’s a police chief in a small town. I’d be afraid to start my car in the morning with that bumper sticker on it.

Even though I no longer live in Madaganistan, I’d be more than happy to put that bumper sticker on my vehicle! 🙂