We predicted this would happen when Hezbollah intervened on behalf of Assad in Syria, including the conquest of Qusayr, and the ongoing battles in Homs and Aleppo.

Hezbollah’s chief, Hassan Nasrallah, openly bragged that Hezbollah was in Syria to the bitter end.

The death toll is rising at this writing, so keep track at the Twitter feed at the bottom of the post.

From The Daily Star of Lebanon, Car bomb kills 10 in Beirut southern suburb:

A car bomb killed at least 10 people in the southern suburb of Beirut Thursday, a stronghold of Hezbollah, security sources told The Daily Star.

The sources said at least 30 people were also wounded in the blast on the main road between Rwais and Bir al-Abed, a neighborhood of the southern suburb that in July was the target of a similar car explosion.

Caretaker Interior Minister Marwan Charbel confirmed that the blast was the result of car explosion.

TV footage showed scores of residents screaming while trying to flee the carnage with dozens of cars in flames and other extensive damage in the area.

Emergency response teams rushed to the scene of the blast that caused thick plumes of smoke to fill the sky over the Lebanese capital.

Over 50 people were wounded on July 9 after a car bomb ripped through the Bir al-Abed neighborhood of the southern suburb of Beirut, in an incident widely linked to the crisis in neighboring Syria. 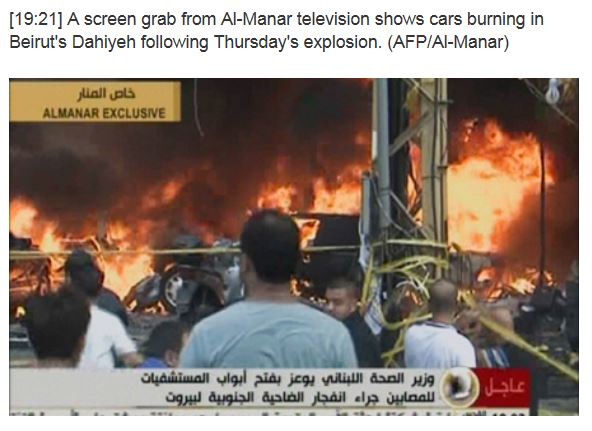 Let ’em all kill each other off…

Sidon is Sunni territory. About 2 months ago a soccer match had al nurse & al Quaeda flags lying & a commemoration of local Sunnis that have died in Syria.

Choices may have to be made again in Lebanon & elsewhere. I have changed my Leb sweet shop/ cafe to what I suspect is a Hizbollah one. The Sunni one was getting very glum.

It is my little barometer & having grown up with Leb neighbours I gotta little gaydar equivalency thing going on .

( during the Yugoslav wars I lived next to Croats & could tell by their faces how their side was going) .