Posted by William A. Jacobson Thursday, August 8, 2013 at 07:00am 8 Comments
More Sharing Options

Taken in Princeton…WV, that is! 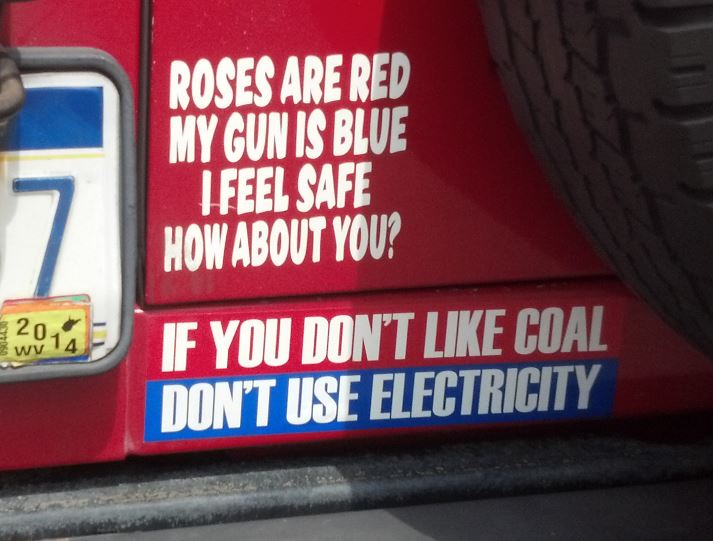 The gun sticker makes me laugh out loud. The coal sticker makes me chuckle, but nervously. After all, many of the most aggressive anti-coal environmental groups would relish the chance to force the public to curtail electricity usage to some degree. Think of it as their version of a Big Gulp restriction. You can have half a kilowatt today. But if you want more you must buy it separately and it must be more expensive……….

They would dearly love to take away our air conditioners.

Those who would like to “curtail” are usually the ones who could afford to pay more. It’s always the middle guy who gets the shaft.

And the poor get their power bills paid by the gov’t.

Eventually the power will be cut, and they will start dying.

Paul McCartney ‘horrified’ as his eco car is flown 7,000 miles from Japan

Sir Paul McCartney is said to be “horrified” that his new eco-friendly car was flown 7,000 miles from Japan.

The Lexus LS600H, which costs £84,000, was a gift from Lexus to the 65-year-old former Beatle, who helped promote the hybrid vehicle.

But instead of arriving by boat as expected, the car was flown to Britain on a Korean Air flight, creating a carbon footprint almost 100 times bigger than if it had come by sea.

LukeHandCool (who reminds everyone, “Love is all you need”)

By what means do boats move on the ocean? Sail power?

Ah… the money sucking, money laundering crooked environmentalists. I wonder how they feel about the oil company in LA who took literally the preservation of the land when drilling. The oil company was in the process of dismantling the rig; except the people, the real environmentalists said no since the area increased with marine life; so they left it alone.