Today we will again be covering the Zimmerman Trial live, all day, with streaming video. Continuing commentary will be posted in the Twitter feed of selected contributors below the first video feed, below.

The State is scheduled to begin its closing argument at 1:00PM today, and the defense tomorrow morning. By tomorrow afternoon the jury should have been charged and begun their deliberations.

We also have brief summaries of the previous day’s events Zimmerman Defense Rests, Closing Statements Start Tomorrow along links to detailed more posts below the second video feed at the bottom of this post. 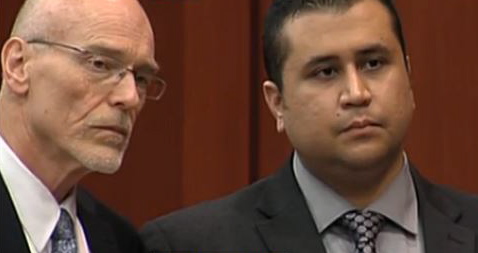 Also, a quick note, in thanks to the Professor and all of you I’ve put in place a 10% discount/free shipping coupon for Legal Insurrection followers interested in “The Law of Self Defense, 2nd Edition”–use code LOSD2-LI at checkout.

During the lunch recess, or immediately thereafter, we will TRY to post a mid-day update. We’ll then follow up with the usual detailed end-of-day wrap up, including video and embedded Tweets, at the usual time in the evening.
For all of our prior coverage on day-to-day events in court, as covered here at Legal Insurrection, click here:

For all of our prior coverage on issues specific to the Law of Self Defense as covered at my own blog, click here:

(NOTE: If you do wander over to the LOSD blog, be sure to come back to Legal Insurrection to comment, as nearly all my time is spent here for the duration of the trial.)

Andrew F. Branca is an MA lawyer and author of the seminal book “The Law of Self Defense,” now available in its just released 2nd Edition, which shows you how to successfully fight the 20-to-life legal battle everyone faces after defending themselves. Take advantage of the 20% “Zimmerman trial” discount & free shipping (ends when the jury returns a verdict). NRA & IDPA members can also use checkout coupon LOSD2-NRA for an additional 10% off. To do so simply visit the Law of Self Defense blog. I have also instituted a similar coupon for Legal Insurrection followers LOSD2-LI(Coupons works ONLY at www.lawofselfdefense.com.) “The Law of Self Defense, 2nd Edition” is also available at Amazon.com.

Many thanks to Professor Jacobson for the invitation to guest-blog on the Zimmerman trial here on Legal Insurrection!

Bill Schaeffer- Did Bernie’s argument get any better? No, not really, still sucked.

Yeah, I think he successfully raised reasonable doubt about George’s innocence.
Oh wait…. That’s not how it’s supposed to work is it?

Ahhh husband expects hot dinner waiting for him when he gets home from work…
Gotta go find someone to cook one for him!

Tell him to stop for takeout on way home.

I wonder if O’Mara can simply quote the prosecution in his closing for the defense, “We don’t know what happened” “No one can be sure”. Sounds like the prosecution has pretty much proved reasonable doubt, even if the evidence did not already firmly establish it.

How does the state’s reference to the can of Arizona Ice Tea watermelon juice NOT open the door to evidence of TM’s drug use?

African Ham juice Tea is in no way proof beyond a reasonable doubt as to drug use.

OMG!
Zimmerman went out with an “OVERLOADED GUN”. WTF???

The bullets were spilling out of it.

What? I always “overload” my gun.. /sarc

yes! not one but TWO flashlights and TWO bullets in the chamber!

I just got home so I missed it. But did he really say that, “Overloaded Gun”?

The two women, one a former permit holder, and one a current holder must have just looked at him thinking, “Is he really that stupid”?

not that I am doubting there will be an acquittal but those two women will guarantee one…….the entire reason you get a CCW permit is because your scared of exactly what happened to GZ.

In the back of their minds they have thought about doing the exact same thing many, many times(pulling a weapon to save your life)

There was more than 1 “dummy ” in court today that’s for sure!

Get back to making dinner…. 🙂

TrayMom can’t take anymore photos of TrayThug b/c he tried to mess up a creepy-ass cracker who was armed.

Bernie closing is gonna be shown in law schools around the country for those looking to be defense attorneys. Best seller

Gee, I hope the jury doesn’t notice that BDLR looks like the BTK Killer’s twin brother:

So BDLRs story is. GZ profiled TM. He then chased down TM, and there is no evidence TM attacked, GZ but if he did he would have been justified because GZ was chasing him. The TM was screaming for help because maybe GZ had pulled a gun on him, which would have been impossible if TM was on top of him, but if TM was on top the way Good said he was, then good may have seen him struggling for the gun and not beating gz, but there is no dna on the gun, so he never went for the gun. Thus the whole thing is GZs fault becausr he started it by proffiling TM and then chasing him. Dooes that pretty much sum things up?

That about sums it up. Got a problem with that.

Funny they dropped the part were TM is backing out and start to retreat when he is shot.

My lord there is not enough sedation on planet for me to sit there and listen to my husband be thrashed that way! This poor family.
There are no winners here… no matter the verdict

What comes of MOM’s objection during that pile of BS?

Nelson sustained with instructions that she would instruct the Jurors as to what the law is..

Does anyone think that GZ made the decision to draw and fire his weapon lightly? He knew his life would not ever be the same if he killed another person…no reasonable person, no legal gun owner takes the responsibility lightly. ONLY when threatened with certain harm or death would one use their gun knowing that guns are made for one and only purpose & that is to KILL. This absuridity of States cause that GZ woke up & decided that was the day he would kill someone black but first call the police, then wait for them so he could show off his trophy needs to be dispelled immediately by MOM & West. I had wished that defense attacked the timelines better as well as RJ aka “catfisher” testimony too. Also the jury should have heard about the financial benefits the TM family has enjoyed and continues to enjoy since the death of their son. The State wished to expose all of GZ’s motives yet no one wants to dirty their hands with the money windfall the Martin/ Fulton /Crump have gotten because its “insensitive ” & not politically correct! Time to drop the crap & let some sunshine in that court to disinfect the germs!

The most economical and reasonable portrayal of the entire incident was the testimony of Mr. Root. When one is being pummeled, one does not rationally consider one’s alternatives and conclude that one’s life will never be the same if one shoots, etc. Zimmerman was desperate at that point and realized he had to use his gun, so he did. As Root testified, he had no other choice.

End of story. Totally self defense.

[…] found a really good summation of the prostitution’s closing argument in the comments at Legal Insurrection. BLDR is Bernie De La Rionda the lead persecutor who gives the closing […]

An absolute downpour of doubt has just been rained down upon the jury thanks to Bernie’s closing.

As part of my pre-meditated plot to commit murder due to racial hatred, I will call the police first and alert them to what I am about to do.

Wouldn’t be surprised if Guy claims that Zimmerman set out a can of Watermelon Cooler to bait his “punk trap.”

I have THE closing argument for this case.

First, you play this clip – http://www.youtube.com/watch?v=g4bftQ4xxFc

After the objection and completely unrepentant but required apology –

Dear Jurors, according to the State’s closing argument, not a single one of you will ever be allowed to defend yourself if you get attacked.

If you have ever cussed in frustration under your breath, you will be guilty of murder.

If you have ever watched someone you did not know in your crime riddled neighborhood, you will be guilty of murder.

If you have ever wanted to serve your community, and sought education to help you do that, you will be guilty of murder.

If you have ever done something in succession that could not also be done simultaneously, you will be guilty of murder.

If you are ever attacked, and do not state your name clearly and concisely while you are screaming for help and afraid for your life, you will be guilty of murder.

That is all the prosecution has for you to consider after their 44 witnesses and numerous exhibits.

I ask you to examine the evidence.

I ask you to listen to the witnesses.

I ask you to read the charges and realize that Prosecutors in this case have shown you more spite, hate, and ill will in his closing argument, never mind his case, than he has proven against Mr. Zimmerman in this entire trial.

AmberK, that was actually a really good close, from my non-attorney point of view. I especially liked the spite, hate, and ill will line at the end.

Bernie’s close sucked and offended me on so many levels. If his close was all that the jury had to consider then George is a free man! No doubt at all.

But there is more to this than what George explained in his “recreation video.” Maybe Dee Dee – Rachel will get paid and tell some reporter what Treyvon really said toward the end on their conversation, or what she really heard being said by George; you can pretty much bet on that coming very soon. Can’t wait!

Did Treyvon sucker punch George? Everyone here believes that, and so do I. But what really happened before that, and then after that. Most folks seem to just be happy to believe that “time just passed” and “things just happened” that George cannot recall fully and will never be able to recall, fully. But I wonder if that is true, and I have no answer to my curiosity.

Perhaps George did what any person would do if they were sucker punched, he defended himself. Perhaps the more experienced fighter, Treyvon, took George to the ground and used the cement or the sprinkler boxes as a weapon against a heavier and stronger opponent (George); that would have been a smart tactical thing to do. And George “shrimped” the two of them in to the grass to stop the blows. Now Treyvon has to punch like crazy to keep George in control. Contrary to popular belief, 158lbs and 5’11-6’2″ is pretty dam skinny and lightweight! George had had enough, but Treyvon is still trying to knock him out, win the fight, so George draws his pistol and fires.

The women on the jury probably don’t have my questions about filling in the blanks, but the ME images of a dead 158lb 17 year old may make the Manslaughter charge look tempting.

Just a post to get people to label me with ugly names again – second night in a row!