A woman was arrested Monday in connection with the latest act of green paint vandalism on a Washington DC landmark over the last several days.

Earlier Monday, green paint was splattered in the lower level of the Bethlehem Chapel in the Washington National Cathedral; the Children’s Chapel at the Cathedral was also said to have been vandalized.

In another incident that occurred July 26th, the Joseph Henry Statue across from the Smithsonian Castle was also found vandalized, according to wusa9.com.

By mid-afternoon Monday, police had arrested a woman in connection with one of those incidents.

D.C. police say a woman has been arrested at the Washington National Cathedral in connection with vandalism there.

Assistant Chief Peter Newsham said the woman was arrested in the area of the cathedral Monday after green paint was found splattered there.

He said the woman would likely face charges of destruction of property.

Vandalism at the Joseph Henry statue, photo via wusa9.com 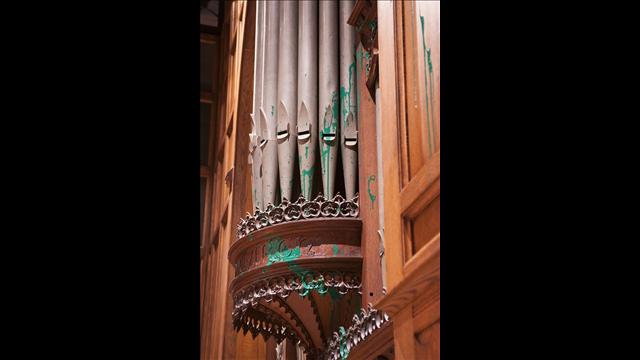 Police could not yet confirm if the vandalism at the cathedral is connected to the Joseph Henry Statue incident.

Police also could not say at this time if the latest incidents are connected with Friday’s vandalism at the Lincoln Memorial, in which green paint was splattered at the base of the statue and the area surrounding it.

So who IS the female of the species idiot ?

The woman was caught green handed…

Say, I just noticed in that picture of the Lincoln statue’s leg… no pants crease. Zero, zip, zed, nada. Does David Brooks know?

Why would Brooks care? Lincoln was a republican, therefore the enemy.

One story today said the police had not been able to question her fully because of a language problem. I’d be curious to know what language she speaks, and if she is one of those “undocumented Americans” we should be rushing to make U.S. citizens.

Or she could be a graduate of one of our fine, fine educational institutions.

At the base of the statue, it looks like she was practicing writing in cursive. Perhaps she thought that’s the proper language to write curse words.

Green is the ‘holy’ color of a certain ‘peaceful’ religion we often reference in relation to Israel.

If she’s a lefty, this will get broomed, quick.

If they can paint her as a conservative, we will still be hearing about it on our death beds.

Right. Absolutely.
Somebody should spray her with green paint.

The paint on that beautiful woodwork offends me. This woman should be made to wear bright green face makeup for a month.

That would be unusual punishment for the US. Does it count as cruel?

If it’s latex, olive oil or Pam can remove it from wood and metal. If it’s oil base various paint removers. If it’s the kind that sticks to oil and latex and has a stain blocker, it will be difficult, but not impossible.

Acid would have been worse for the stone, wood, metals, any tapestries and artwork involved in all four sites.

All removal solutions are also dependent on whether the paint is allowed to dry a long time.

Hopefully, the green paint lady’s work won’t be considered a cultural protest phenomenon like the graffiti on Alcatraz, etc. and protected as an art form.

“That would be unusual punishment for the US. Does it count as cruel?”

Are you kidding? It made Margaret Hamilton famous for life!

Those of you who watch “Ray Donovan” will understand. Offer her the bag or the bat . . .

‘All right, I’m gonna give you a choice. You can either have the money and the hammer or you can walk out of here. You can’t have both. What do you want?’

The less said the better. It’s just to easy to set off a trend among crazies. You know, in Saudi Arabia they’d chop her hands off.

Those monuments are beautiful, but beyond that, they don’t mean much anymore.

GREEN ehhh…..interesting, since it is the favorite color for Mo-Ham-Ed.

And many a DC resident, elected and not.

I’ve seen human stick figures like that used as an alphabet somewhere, long ago. Cannot recall where.