Hillary, the rebranding 2013, sponsored by you

This week, the William J. Clinton Presidential Center in Little Rock, Arkansas, is hosting an exhibition of pantsuits and other designs by fashion designer and close friend to the Clintons, Oscar de la Renta.

De la Renta’s teal pantsuit design was one of the iconic Hillary looks — one that some might say defined the presidential hopeful’s 90s look. But the rebranding gurus brought out the big guns — including Vogue magazine’s Anna Wintour — to tell the public that the pantsuit is cool. 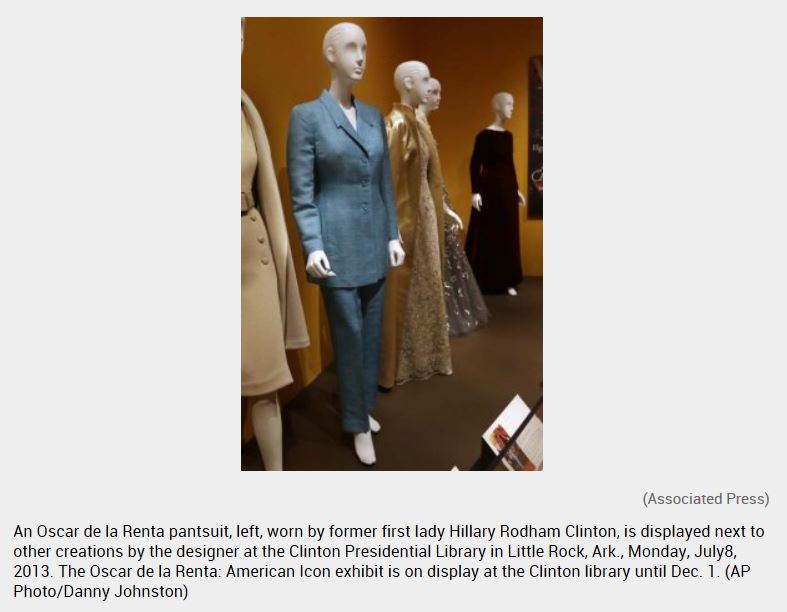 The William J. Clinton Presidential center’s exhibition comes at a time when the rebranding of Hillary is being pursued with renewed passion. A lull had ensued after the “Texts from Hillary” site dwindled, but a new campaign, “Ready for Hillary,” launched weeks ago and now the pantsuit project both are addressing the core challenges she faces: connection with the Clinton corruption clique, failure at health-care reform where Obama “succeeded,” questionable feminist decisions, and a generally tired brand.

If they can renew the pantsuit, they might be able to convince the public that Hillary can come back, too.

The William J. Clinton Presidential Center hosting the pantsuit project is one of 13 presidential libraries that cost taxpayers $75 million per year to operate. Denise Rich, who was pardoned by Bill Clinton at the end of the president’s tenure, pledged $450,000 for the initial construction of the center.

How does it feel to know, as a U.S. taxpayer, you’re funding part of Hillary’s pantsuit project propaganda? Sequester, anyone?

It would be worth a few taxpayer dollars to see Hill put on that Oscar de la Renta suit now. Rebranding, or resizing?

There’s this, and Mark Rich died recently. These should be reminders that out of a sordid administration, nothing was more sordid than its end, with what amounted to outright pardon purchasing. I recall no reports that Hillary had any problem with this; certainly no one has left memoirs indicating the slightest reflection on the issue.

If we elect her then we’ll get what we ask for; well, we just did that last year.

During her Secretary of State years, her pantsuits tended to the Ernst Stavro Blofeld or Dr. Evil look.

I have yet to recover from the orange 3 piecer at the styrofoam palace.

Maybe the exhibit was meant to tell the public that at least one of the Clintons can keep their pants on, thereby regaining public trust.

All scandals/crimes will be brushed aside, Clinton style. Hillary offers two false choices, then says “what difference, at this point, does it make?”

Where’s the standard black “‘Ol Krusty” – diehard Freepers want to know. And where is that infamous blue dress?

With H Clinton as pres, the devolution of America will be past completion.

I spent hours and hours campaigning for Hillary in 2008…. I remember all the racist charges Obama and his liberal press went after her and Bill…

now the liberal media thinks its HER damn turn.

THE WOMAN IS A LYING POS!

I will never ever vote for again and will work harder to defeat her when she runs in 2016…. and oh yea, she’s running, she and her stupid husband are nothing but power hungry leeches.