Hello! I’m a regular reader and finally had the chance to get a picture worthy of your website.

This photo was taken Monday evening on Route 1 in Alexandria, Fairfax County, VA. The van had a VA plate. 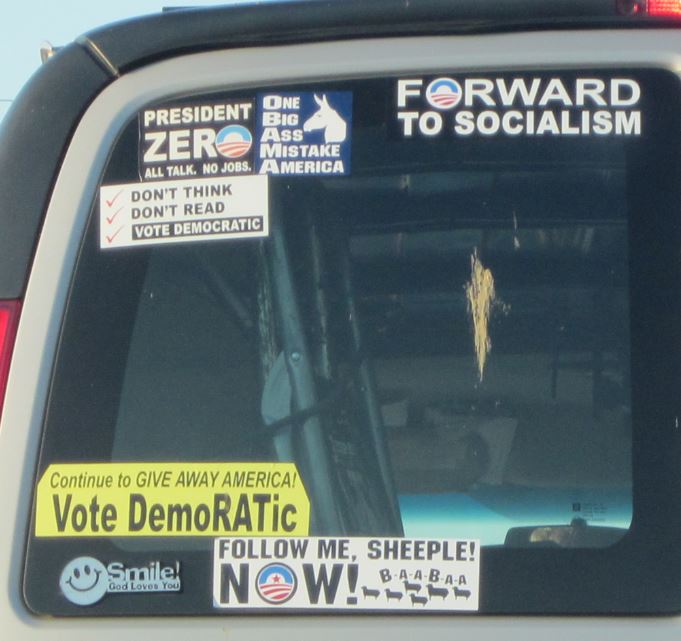 Gosh, I’m hoping that the bird meant that to be an exclamation point. The nation has enough leftists, don’t need no stinkin’ birdie to join up with ’em. 🙂

So terribly restrained of the car owner,

They seem to have an almost perfect symmetry…

Thoughts to myself:
What a brave soul.

Truck must not be new, or driven off-road a lot so that key marks don’t show. (The Obama crowd being such an intolerant, spiteful lot)

Is that dried rotten egg or OWS protestor poop running down the window?

That is a trademan’s van. Somebody who works for a living.

S/he has one or two too many stickers, yes; but that is nothing compared to the left. An example here:

Magnify the image after the page opens to read the stickers.

As if a Volvo driver needs to clarify their political opinions.

Doesn’t this qualify as a racist hate crime? Obviously, the only possible reason the car owner could have to put stickers like this up is they hate black people and black presidents. . . . . .

Both parties are culpable. Mitt Romney scared more voters than you could win the contest with. Why? Maybe, people thought Obama would do less than the Mormon? Does everything count when you go into battle for the presidency? YES

And, people who do vote have seen some doozies coming along as candidates? Dole, anyone? Dukasis for others?

I have no idea what 2014 will bring. But I hope it knocks the republican Florida governor Rick Scott out of the box!

I also truly wish we could get off the debates about sex between consenting adults. It’s none of your business.

But that’s the biggest negative for the republican party. In some circles they’re called “bible thumpers.” And, just as capable of twisting our Constitution as the lunatics who thinks the only laws come from the exact wording of the Constitution, so you can’t have privacy. Married couples can’t choose to use condoms. And, laws the populace has embraced need to be removed, anyway.

But it’s not up to me. All I can do when I vote is choose. Won’t pick anyone from the extreme right wing. Even now.

I am in agreement Carol. I also think sex between consenting adults and who people choose to love is none of the governments business.

I have a scientific theory that is not popular but I think it is true. There are not just homosexuals, bisexuals, or heterosexuals. There is a continuum of sexuality where on either end of the spectrum you have people who are truly homosexual or hetrosexual and nothing even persecution and threat of death is going to change that. Then you have a spectrum in between where there is a preference but the final outcome depends on who the person meets in their life and what the social pressures are with those closer to either end more inclined to resist social pressure.

In my mind it is genetic where you fall similar to having blue or brown eyes. (and if it is genetic then it must be G_d’s plan) For people who are 60:40 (homosexual:hetrosexual) society may be able to pressure them into being hetrosexual and thus we have people touting some people can be “cured”. People are what they are and as long as it is between two consenting adults it should be no ones business.

I am not suggesting the Catholic church should be forced to perform weddings as the church should have freedom of religion but many Episcopalian churches will marry people of the same gender and if the church is okay with doing it then no one else should complain.

I am going to say something that is going to be very unpopular. I am sick and tired of having a “black” president. When we had Bush we could complain loud about his many failings even in ways that might not be exactly polite but that were funny and true. We could hold him accountable for his actions.

With Obama we have real corruption and incompetence and if you say anything the left screams that you are only saying it because you are racist. Personally I don’t care if Obama is white, black, polka dotted, or purple. How are we ever going to solve the problems and have open honest discussion if anything other than on your knees worshiping praise is considered a racist comment.

What I want is a president for the people – all the people with his/her designation being only the American President. A president that you can question and complain about if needed. This president can be of any race, gender, sexual orientation; they just have to be honest, hard working, economically and politically smart with the best interest of the American People now and future generations their main focus.

I would really like to see this site start to pull things together for the 2016 election (now rather than later). I do not want another election with “no good choices”. I am an independent voter so I don’t care if I vote Republican, Democrat, or some new party as long as the candidate is good.

Gatewypundit is reporting that the AG Holder Justice Department has just seized (placed a hold) George Zimmerman’s gun from the Sanford PD in Florida.

Make of it what you will.