It’s like a whole other country, and it’s not Texas

It’s like a whole other country, and it’s not Texas

The #fem2 hashtag is “A catch-all for Feminist tweets, sometimes combined with #p2.”

The Pebble Mine is the latest worst thing ever to happen to the environment.

From Nick, with the subject line “Portland Crazy”:

I couldn’t help but think of you when I saw this near the Portland, OR Airport this morning, Professor!

I love how she managed to get a shot in at the Pebble Mine. 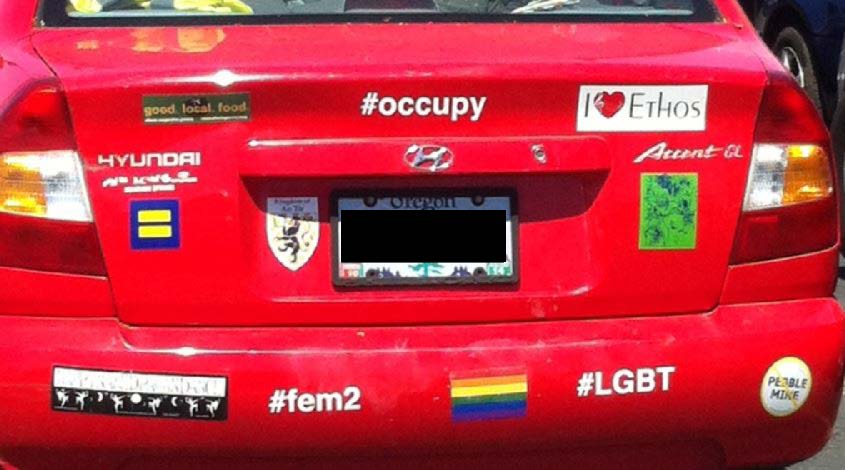 That’s a loud cry for help.

And Juba is so right; this array of leftist stickers is a big cry for help.

Maybe we need to sell the area of the Pebble Mine to Canada.

At least then it will get used for the benefit of humanity.

No Jesus fish, of course.

WA and OR are where lesbian therapists go when they run out of money and partners…and their license has been revoked.

Why do we think the driver/owner if s female? It could belong to:

1) A transgendered-thingamabob;
2) A white liberal male whose Phd in Women’s Studies taught him to hate his penis;
3) Chris Hayes.

Note the “thin blue line” sticker that those who are family members of law enforcement usually put on their cars. It’s to notify law enforcement that they shouldn’t be ticketed or at least receive special treatment.

What is that equal sign?
It is a Korean car, I don’t think Koreans are that tolerant
Of PDAs amongs gays and have gay marriage.

I think the equal sign is some “human rights” group symbol, but what they really mean is “homosexual rights.”

All the dysfunctional behaviors fit to be printed on a bumper sticker. Well, not quite. LGBT is notoriously intolerant of alternate lifestyles. It should be LGBTZPA… otherwise known as confused.

My eyes may be bad but I see no thin blue line.

I see the rainbow thingy which is part blue and the equal sign in a blue square (whatever that means) and what looks like a dark blue ‘good local food’ sticker.

My #1 rule: 3 or more political bumper stickers (even if you agree with the sentiments) = “Crazy Inside”. I have yet to be proven wrong.

as I understand it, the yellow equal sign in a blue field is the “we are all equal” response, assuring LGBT(IQ) types that the displayer feels no discrimination to them. or something.

inside a blue house, it used to be the fair housing act sign.

the rainbow flag is self-explanatory and in no way is a thin blue line sticker. also, @Roux, that used to be the perception….but these days, you can get them anywhere, and more often than not it means nothing anymore. in fact, my agency tends to avoid those stickers as much as possible since there was an alert that those stickers nowadays meant “rob this car and get goodies.”

by the by, here’s my takeaway from that car: ever notice how liberals put stickers all over the painted areas and conservatives tend to put them on bumpers and glass in order to avoid destroying the car’s finish later?

Conservatives pay for their own cars. $5 says this car belongs to a co-ed, a gift from a parent.

I really wish these wannabe hippies and nature freaks would actually live according to their ideas and give up their freakin’ cars, electricity, and other conveniences of modern life (goodbye running water and indoor toilets) and then leave the rest of us alone.

Since they won’t cut down trees to build shelter, maybe they can find a nice cave, or perhaps a rock shelter?

They would speak ‘truth’ to power. But actually living that ‘truth’? Not so much.

I try to stay way back from cars so decorated. There is definitely a crazy person behind the wheel!

I had to laugh when I read this in the comments (thanks, pathfindersgt):

“by the by, here’s my takeaway from that car: ever notice how liberals put stickers all over the painted areas and conservatives tend to put them on bumpers and glass in order to avoid destroying the car’s finish later?”

Yes, I do have one sticker on my car – a Gadsden flag and it is on my window and the finish of my car was the deciding factor!

oh yeah, that’s something else. conservatives tend to “cluster” their stickers in the same general area, I’ve noticed. liberals seem to want to put them EVERYWHERE like these stickers are NASCAR endorsements or something. maybe the stickers are holding the car together…who knows? anyway, I think it may have something to do with an orderly mind. at least, to my psychology 101 thinking.

can’t wait to see the trolls try to take apart the liberals capered to NASCAR there. might even cause a stroke via the interwebs…..