Facebook Fail: Man Arrested After Commenting on Own “Fugitive of the Day” Photo

Facebook Fail: Man Arrested After Commenting on Own “Fugitive of the Day” Photo

Sometimes people should just avoid the urge to comment on Facebook, at least, not without an attorney present.

A Florida man was arrested by the Pasco County Sheriff’s Office after commenting on the department’s “Fugitive of the Day” Facebook post in which he was the featured fugitive, in reference to a robbery.  A back and forth series of exchanges between the man and the Fugitive Warrants unit ensued in the comments section, while an amused public chimed in on Facebook.

Claiming he was in a hospital during a robbery in which he was named a suspect, Matthew Oliver’s anger was apparent based on his comments — which included he was set up by a “crack head” and blamed the sheriff’s office for “slandering his name.”

Instead of calling the sheriff’s office, Oliver continued to detail his alibi, writing he was “cut during an MMA fight, got MRSA” and was hospitalized for two months during the robbery in question. 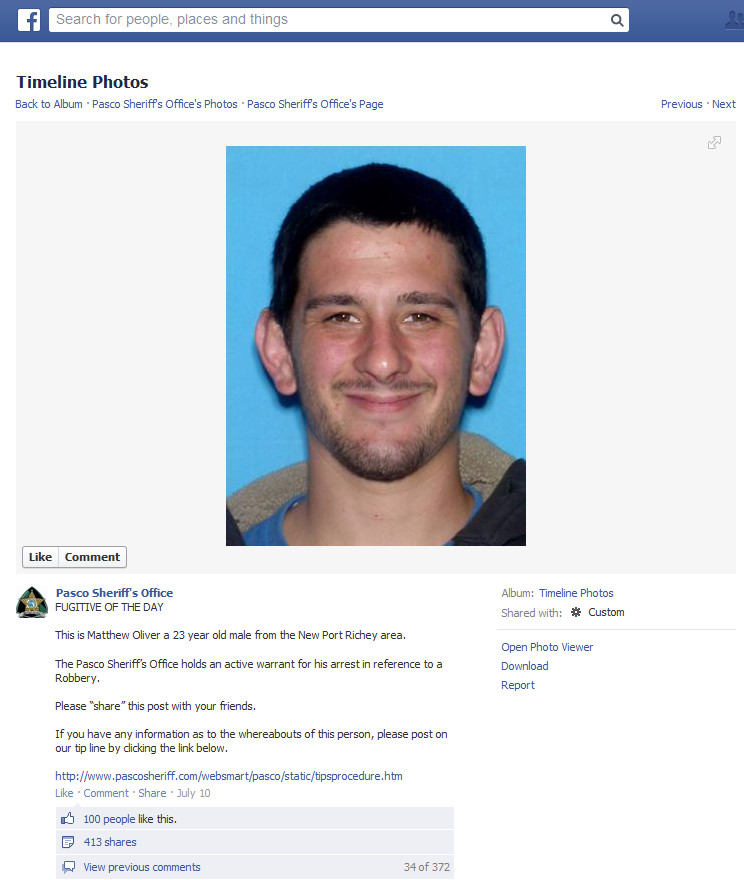 Upon seeing Oliver’s responses to the posting, Facebook bystanders jumped in with quips like, “He’ll be on “World’s Dumbest Criminals” in no time…” and “Ur runnin from the popo & post on your picture? Lol,” according to First Coast News.

Some of Oliver’s other comments were captured by local Tampa NBC News:

“Why should I have to leave work and sit in jail with a 10000 dollar bond? Were in a recession fyi and I don’t have the kind of money or assets laying around to afford to sit in jail for something I didn’t do,” Oliver commented.

Oliver added in another comment, “I’ve been in the hospital since the end of April its hard to prove something when I’m hooked up to Antibiotics. And now I’m out what do you think I’m doing? My innocence shouldn’t have to be proven when there’s proof on paper that I was somewhere else, the police should pay a little more attention to what there[sic] doing before they just start declaring people Fugitives and putting Warrants out. This isn’t Nazi Germany, there’s[sic] certain procedures that need to be followed and I doubt any of them were.”

Indeed, the Fugitive Warrants unit posted on the Facebook page that Oliver’s hospital claim was true, responding in the comments, “I have verified that Matt’s post about being in the hospital is true. In an earlier post, I provided a telephone number for him to call us. If he feels he does not fit the definition of the word ‘fugitive,’ I will be hearing from him.”

For whatever reason, it appears the Fugitive Warrants unit apparently did not feel that Oliver’s hospital claim absolved him of the authorities’ interest in him.  It is not clear exactly what Oliver’s alleged connection is or isn’t to the robbery in question. (Here’s your legal disclaimer that the subject of an arrest is presumed innocent unless and until proven guilty).

The Pasco Sheriff’s Office only launched the online program in April.  Authorities post ‘wanted’ photos and information pertaining to the alleged crimes connected to fugitives for which they have outstanding warrants, and they ask the public’s assistance in posting tips.  You’d think the page would be overwhelmed by trolls and useless posts, making it inefficient, but apparently that isn’t the case.  In just over its first week, tips from the page led to the successful capture of 2 fugitives, and on Friday the sheriff’s office again credited the program for arrests.

Pasco Sheriff’s Office posted the updated news of Oliver’s arrest  – on its Facebook page.  According to NBC News, it was the first time the office had ever had a fugitive comment on his own Facebook post.

Yet another Darwin Award winner from Floriduh.

Need 150 signatures to get it posted on the website.

I’ve got a lot of sympathy for this guy. Stuck in a hospital during the crime in question, and now back out trying to work his buns off (presumably) to repay two months of hospital bills (which probably aren’t covered by Obamacare). Now here come the police, threatening to put him in jail where his income will vanish and his bills only grow, and at best he’ll have to pay a thousand dollars to a bail bondsman with no hope of getting it back and who knows how many thousand dollars to a lawyer, provided he could even find one who would work on credit. With this kind of pressure against him, they could twist his arm into saying *anything* against whoever they want even if he is innocent as the new-fallen snow.

What I think was dumb was putting all that on FB. He should have called a lawyer.

Granted, but being dumb is still not a crime, but it sure will get you a badge.

He did not try to sock puppet?

If they weren’t so damned dumb, police work would be hard.

Notice he said he was hospitalized for two months following getting cut in a MMA fight. Looks like GZ had good reason to fear serious injury during his attack

He was profiled by Angela corey, they have ‘MMA’ now as a keyword in their profiling database.

He probably figures Angela Corey will get involved and railroad him since they were unable to frame George.

Was there an “Occupy Tampa” protest/squat? If so, I’d wager this loser was involved.

Dear fugitive, your alibi checks out but if you still feel you’re not a fugitive you should call and discuss it.

These are the people who we let have guns.

Perhaps they have evidence that his involvement with the robbery isn’t disproven if he was in the hospital? They really do owe the public an explanation because it looks a lot like they verified his alibi but arrested him anyway.

You can beat the rap, but you can’t beat the ride. Maybe he will plea to something just because he can’t afford any alternatives? I used to not be so cynical, but Florida law enforcement needs to recognize the importance of recovering any credibility these days by being very clear about what their interest in arresting someone is actually based on.

(Too dumb to live free)

He’s a white guy! He knows LE is going to let him skate because raaaacist! What’s he bitchin’ about?