The Judge in the Zimmerman trial just ruled that the jury will not get to see numerous text messages on Trayvon Martin’s phone regarding his prowess at fighting, including texts as to how to punch someone in the nose and make them bleed.

West: #TrayvonMartin texted on "how he was able to hit the person in the nose & make their nose bleed." #ZimmermanTrial #GeorgeZimmerman

The Judge did not give an explanation for her ruling other than to stand by her prior ruling as to social media evidence.

It is not clear if the Judge found a lack of authentication, which was one of the arguments last night.  The Judge did indicate she reviewed the Lumarque case in which a trial court was reversed for failing to allow text messages.

The Judge also ruled that an animated video prepared by the defense (consisting of still animation pages, not motion) will not be allowed in evidence, but could be used as a demonstrative exhibit by the defense.  That means that the animation images are merely part of the defense argument, probably in closing, not evidence the jury takes back into the jury room. 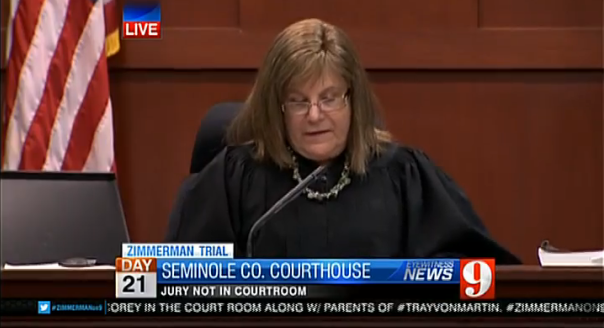 What happened to the defense testimony about tox levels in TM’s system? Why did they go thru so much trouble to get that evidence in, then not use it?

Not to disclose TM’s drug and fighting to the jury is a travesty/abuse of justice.

I think the defense finally realized that it’s just not that big of deal. The majority of Americans favor relaxed laws on MJ and the THC levels were so low in TM’s body it would come across as kicking someone when they’re down(in this case dead). It could have backfired on the defense.

So I guess I really don’t know either.

Yes, my guess is that it was a tactical decision by the defense. They probably didn’t want to get into a “battle of the experts” with the state on the effects of MJ. (The state probably had an expert ready to testify that MJ makes people less focused, less aggressive, etc., and therefore Trayvon was less likely to have been the aggressor in the fight. That crazy ME, Dr. Bao, seemed to have been hinting at something like that during his testimony).

it is the impact of coming off the high that brings about the aggression…. and there is a lot of evidence that MJ use leads to mental illness.

Low blood levels of THC indicate marijuana withdrawal. This causes irritability, short temper and quick to anger to anger. More so from chronic stoned pot heads. Illustrated in detail in Mr. Martin’s internet, cellphone droppings.
Hight levels indicating a recent smoke would have mellowed Trayvon out and this whole thing would have not occurred.
i tell one of my friends to prepare for a big fight with his wife if he stops smoking pot.
Trayvon was primed for anger. He not going to take being looked at funny by a crazy ass cracker,. The only one he has to talk with is Jeantel, it is cold and raining. That is how and why the fight occurred. Trayvon was not stoned, just dangerous low levels of THC from a few days ago.

Martin was in marijuana withdrawal which makes people irritable.
The information that there is an experienced, proficient strong, fast street fighter walking around in an extra irritable mood who then sees a crazy ass cracker looking at him funny is important.

They argued for it so if judge denied then could bring it up on appeal.

BTW, sorry for blog-hogging. I can’t get on to the other trial post. High traffic volume?

LI is the go-to blog for the GZ trial.

I’m just trying to have one less post than you, wyntre. Dang it! Now we’re even again! lol

You forced me to take back the lead!

OMG! She rules in favor of the defense! What is wrong with her? Has she finally come to her senses?

Am I the only one that thinks the prosecutors are a bunch of conniving, deceitful, spiteful jerks?

Go see how your tax dollars were wasted by race hustlers. From the federal gubmint.

Does having the prosecution close tomorrow and the defense close Friday disadvantage the defense in any way?

The State will get the last word.

I read somewhere in these massive threads…

Defense wanted to do this all on Friday but Nelson wouldn’t have it.

god forbid, but if this ends with a hung jury then what happens?

If the State even SMELLS like it might try this booger again, the people of Florida need to make some noise.

could any of Omara’s JOA arguments be brought up then? I would think GZ needs the acquittal for immunity from civil

Note a crim. law mavin, but a retrial is generally de novo, meaning you start from scratch.

Nothing from the old record is used.

including the malicious judge and malicious persecutors?

We do this all over again.

[…] Breaking – Jury will not get to see Trayvon fighting texts […]

Defense will argue that lesser charges (manslaughter, etc.) should be thrown out to avoid a compromise verdict by the jury. They will argue that self defense is self defense. The jury will be unaware that, even if Zimmerman is acquitted on both murder 2 and manslaughter charges, he could still face 25-30 year in prison on a lesser charge.
See http://www.mediaite.com/online/even-if-george-zimmerman-is-found-not-guilty-of-murder-and-manslaughter-he-could-still-serve-25-years/

Even though Zimmerman might be acquitted of all charges in this case, it isn’t at all improbable that the DOJ could charge and try him separately for violating Trayvon Martin’s civil rights, as happened to the police officers involved in the Rodney King case. In fact, I consider this quite likely.

I think it is impossible.

I agree with Ragspierre, especially considering the FBI has already been down here to do their “George Zimmerman is a racist” investigation, and found zip. Less than zip, actually, because they found things that made him look well to the right side of neutral.

I have seen that question over and over again. There has been an answer and that is the FBI found nothing that led to the notion that Zimmerman was racist. They abandoned the case.

They left empty-handed, and said so.

Besides that, he’s a private citizen, not a business entity or a governmental agency, and it happened on private property.

Anyone else notice how many times the prosecution has used the phrase “isn’t it possible that…”? I am no legal expert here, but isn’t it typically the defense is asking that question of prosecution witnesses? Isnt the prosecution supposed to be presenting a theory in the courtroom about what happened during the five minutes in question and the defense role is to raise reasonable doubt?

Not to mention that each time they get a answer in the affirmative from the witness it is preceded with a perplexed look from the witness (as if to say “are you really asking me this”) and an answer something along the lines of “I suppose it is possible”.

You are far from the first person to notice that, but it’s no less true for the repetition. This whole case has been presented backwards to how it normally works. Usually the prosecution has a (pretty tight) idea of how the scenario played out, and they shore it up with evidence along the way, leading inevitably to the conclusion that the defendant is guilty. The defense tries to poke holes in that scenario to introduce enough plausible doubt that maybe it didn’t happen like that, and maybe this guy isn’t guilty.

In this trial, the defense had the solid, evidence-supported train of events, and the prosecution tried to introduce doubt that he is guilty. The problem is, even if they poke so many holes in it that looks like swiss cheese, as long as what remains is still plausible, then they, by definition, did not prove GZ is guilty beyond and the exclusion of all reasonable doubt.

Apparently in the new U.S.A. you have to prove you are innocent if you do something that the ruling elite disapprove off. And most of the so-called champions of “civil rights” in our country are perfectly happy with this.

I am not so sure it was all that wise for O’Mera to have objected to the state bringing in the arresting officer in the GZ case back in 2005:

1) O’Mera brings in the 30 witnesses to testify to GZ’s peaceful character.

2) would seem to open the door to bringing evidence of TM’s past that is positive for the defense. I have no legal training, but how can past “bad acts” be relevant only for the prosecutions case and for the defense?

3) arresting officer could give an accounting that “praises with faint damnation”. Most likely is that the police officer over reacted to the situation and he will give truthful testimony to that effect or O’Mera can unload on him the way defense attorneys go after cops that make their clients look bad.

4)there is a good possibility that the officer did overreact on the occasion in question which means there is likely to be some history of complaints against him that the defense can use to impeach his testimony.

Given the prosecutions performance to date, it is quite conceivable that they didn’t do their homework on the arresting officer. It could have been an opening for O’Mera to give the prosecution a humiliating final blow.

I would like to know from the legal experts on board about whether opening up GZ’s past gives a path for the defense to go into TM’s past (or at least an easy ground for appeal). Like I mentioned, I dont see how past conduct would be relevant only for the prosecution to use and not available to the defense. If anything, one would think the opposite would be the case.

[…] naturally the judge refused to allow them. Of course, she didn’t actually explain the reasoining behind her decision but her comments […]

[…] morning provided a snapshot of Judge Nelson’s style: her peremptory decision to exclude exculpatory evidence recovered from Martin’s cellphone – a ruling that in and of […]

Zimmerman’s mixed martial arts instructor rated his fighting ability at 0.5 when the class started and current at 1.5 out of ten, with 10 being the best.
Zimmerman was a soft, weak unskilled target.