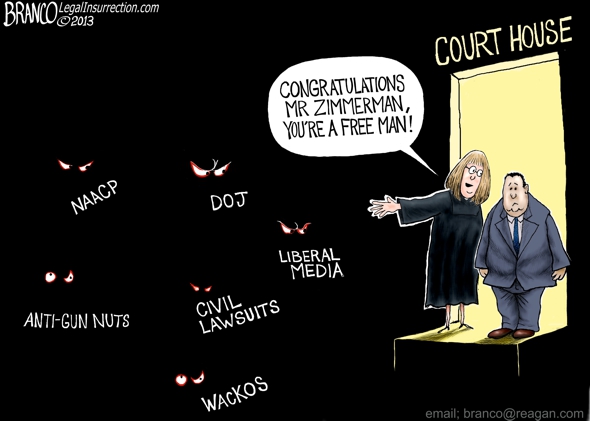 Judge Nelson should look more sinister…because she is.

In retrospect, Judge Nelson actually did George Zimmerman a big favor by slanting her rulings towards the prosecution. Can you imagine what the news stories would look like if he’d been acquitted after his lawyers effectively argued that Martin was a thug, based on his drug results, text messaging, and school suspension?

It’s a much cleaner victory this way.

Maybe if she were wearing pink? And had a bunch of plates hanging up on the wall behind her with animated kittens mewing?

Haha, I got that. High Inquisitor.

I wonder if Judge Nelson was trying to commit reversible error. That way she would be off the hook and the Court of Appeals could reverse after the hullabaloo died down.

Wasn’t this trial supposed to prevent riots in Oakland? Oh, that’s right, only if an innocent “Creepy Ass Cracker” got lynched, I almost forgot.

We live in an insane asylum run by the inmates at the moment.

but….Zimmerman is Hispanic
he is not a “cracker.”

He’s a cracker with salsa on top.

Why aren’t there riots demanding the prosecutors be jailed?

Today my husband read up on DXM use, that is an ingredient in “lean” which other ingredients include Skittles and Watermelon drink by AZ tea company. In large doses, it has an effect comparable to PCP (according the the US DOJ).

TM may not have been tested for DXM at autopsy, since that is not part of a standard screen. Anyone know if they keep blood samples in FL from shooting victims? If so, a test should definitely be done to find out if TM was in fact high on the stuff at the time of the incident.

His autopsy report did show liver damage, consistent with someone who was a long term user of the stuff.

Trayvon was tweeting one of his buds for Rx codeine (stronger than cough syrup), to make some “fire-ass lean.”

It is a a shame his liver gave up so easily.

His liver must have been a racist.

I imagine that the true form of the Leviathan is intentionally obfuscated in darkness. To look upon its nature will surely invite an audit, prosecution or persecution, or worse of the viewer.

Sadly, I think the Zimmerman family would be safer in Israel. I think the haters and race baiters will not give up until they have their “justice”.

safer in Israel? Why? They are not Jews!!

If you had said that they would be safer at the Vatican then you would be making sense. The Zimmerman family happen to be Roman Catholics.

On the other hand, maybe they would be better taking a long vacation in Peru.

It was my understanding that Mr. Zimmerman was of partial Jewish descent, but his father was not practicing, and that he followed his Mother’s Catholicism. I was also told that anyone of Jewish descent, whether practicing or not, was welcome to become a citizen of Israel. If I was misinformed on either, I apologize to anyone who may have been offended.

With that said, Israel is unfortunately not generally a safe place because it seems the rest of the world wants to destroy it. That I feel he would be safer there than here was a comment on just how bad things are here. Obama put a target on GZs head for his own political gain, and that was just pure evil.

In degrees of persecution, George is Jewish.

If he is truly a “Free” man, he would have his passport back and have the freedom of travel to go wherever he wants, perhaps on a trip to South America to visit the relatives and avoid the frothing loons that want to harm him here.

Somehow I don’t think that’s true. Has there been any reporting of him getting his passport back? All I can see is the press screaming about taking it away a year ago, nothing recent.

Another Hitler parody of the case:

Branca is mentioned at the end “Branca will mock me”

Reminds me of the shadow monster in Order of the Stick.

[…] Note: You may reprint this cartoon provided you link back to this source. To see more Legal Insurrection Branco cartoons, click here. Branco’s page is Cartoonist A.F.Branco […]