Just a quick note here to provide a brief wrap-up of today, Monday the 10th’s, events in the Zimmerman trial.  The morning saw the discussion of some motions and other open business.  Notably, George Zimmerman’s wife, Shellie, was present in court today. 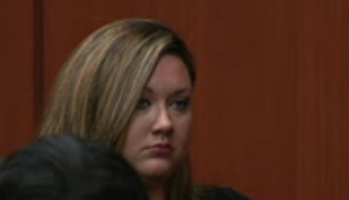 The defense first motioned the court for a continuance on the basis that the State’s slow-rolling of discovery evidence had simply left them unprepared for trial at this time. The additional time required might be a couple of weeks or more—it was hard to tell until they’d had a chance to examine and evaluate the recently delivered discovery, as well as the still to be scheduled deposition of Attorney Crump. The defense informed the Court in plain language that they are simply not ready to proceed to trial.  The State objected to any continuance, and the Judge Nelson denied the motion. So, no continuance for the defense.

It is noteworthy that the denial of a motion for continuance reasonably made is solid grounds for an appellate finding that the trial court abused its discretion, and fertile grounds for a reversal of conviction.

The defense asked if there could be a relaxation of certain rules of evidence, given the State’s delay in delivering, and sometimes completely failing to deliver, relevant discovery. Specifically, they asked that if some piece of evidence became relevant and was admissible except for inadequate authentication, and the defense could prove that authentication could not have been completed because of State’s conduct, that the evidence nevertheless be admitted. Judge Nelson stated she would consider that on a instance-by-instance basis.

More substantively, today also saw the start of jury selection.  A pool of 100 prospective jurors completed a juror questionnaire, and then these were copied, and distributed and reviewed by the Court, the State, and defense counsel.  When they had identified several prospective jurors that they all agreed warranted further questioning they began to bring those individuals into the court room for an initial voir dire.  This “pre-“voir dire was limited to issues around pre-trial publicity.  A smaller pool of 21 prospective jurors will be selected from these 100 based on their questionnaires and this initial voir dire, and then these 21 will be subject to a more normally comprehensive voir dire.  A total of 10 jurors are to be selected, including the 6 primary jurors and 4 alternate jurors.

Four prospective jurors were questioned by both the State and defense counsel today.  Their identities are to remain undisclosed, and they were accordingly identified by an alpha-numeric combination:  B12, B29, B30, and B76.  Perhaps the most remarkable observation from today’s questioning of the potential jurors was how effectively the misinformation campaign being waged under the name of the Martin family has managed to poison the jury pool. 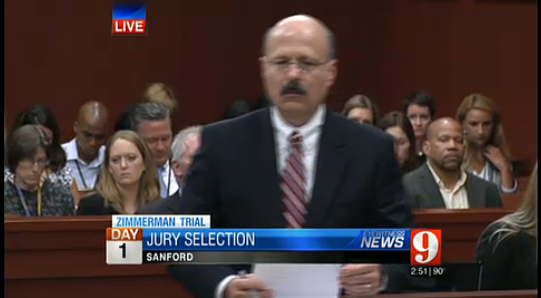 For example, the first prospective juror, B12, apparently a woman, recalls seeing a picture of Trayvon Martin as “a kid”, apparently referring to the frequently-reproduced photo of the 17-year-old football player as a 12-year-old boy.  She also recalled hearing that Zimmerman had “followed” Trayvon. 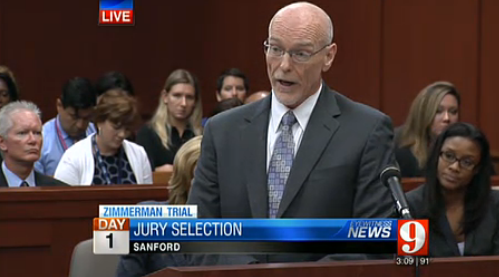 The next prospective juror, B29, also apparently a woman, was questioned by Don West for the defense once de la Rionda had finished with her.  She reported that she had arrived from Chicago only four months ago, but had “no idea” about the case, and said “I don’t like watching the news, period,” and “I don’t read any newspapers, don’t watch the news.”

She did, however, recall that some “little boy passed away,” and “I’m assuming he was a kid, 12 or 13.”  She recalled seeing pictures of Trayvon in various formats, including T-shirts.  She reported hearing people talking about the event and taking sides about the “child who died.”

Prospective juror B30 is an elderly man , hard of hearing and recently widowed.  When asked if he was juror B30 he responded, “I’d rather B30 than be 65, which is what I am,” which drew big laughs from the court room.

He recalled hearing that Trayvon had been out walking one night, got into a scuffle, and got shot.  He also reported a sense that that “both parties were at fault, two people instigated something.”

He also stated that he had heard Trayvon had been in some trouble and so had come to stay with his Dad in Sanford.

Zimmerman Trial:B30 recalls that Trayvon had been in some trouble, so came to stay w/Dad. Live: bit.ly/ZFaS7l #Zimmerman #Trayvon

Prospective juror B76 was another woman.  she recalled hearing that a young man had been shot and that Zimmerman had been injured.

She also said that she didn’t believe what she heard on TV.

The day was approaching 5PM by the time they wrapped up with B76, so the Court called it a day.  All the prospective jurors were brought in and told by the Court to avoid any discussion of the case, to not investigate into the matter on their own, and other usual instructions given to prospective jurors to try to prevent them from tainting themselves once they are aware of the specific trial for which they might be called to sit.

At day’s end no single juror had been definitely picked for the jury.

Tomorrow this process will continue, and if today is any indication we can expect the questioning of each juror to take on average 30 to 40 minutes.

And, naturally, we’ll launch our live coverage for the day promptly with the start of the Court’s business, including live stream video and the real-time Twitter coverage from among the best legal observers on this case (and me).

She has had a makeover . There is Botox to suppress frowns & grimaces. She has been given the look common to ex starlets aka the DrewBarrynore rejuvenation project .

I think it is quite good because she can sit out a few days & put in a sub & no one would notice. Textbook job.

Funny, I had just been thinking that she looked quite unhappy but very good, considering.

And you know this based on a not terribly-clear picture?

Yes. What do you think goes into a trial by media ? Did you see the makeover Arias got ?
Everything about her appearance in court was planned . One of the reasons why the Prosecution released the pornographi shots of Arias was to counteract the image of plain Jane victim. The photos displayed the lengths that she had gone to in her sex activity – so much that her anus was damaged.

The camera is going to be on The Wife especially asshe is an accomplice in the $$$$ angle.

It is all about the visuals.

Unfortunately George is fat again , which is bad for public support.

Pretty amazing how many people who don’t even consider themselves “news” readers/viewers have been propagandized about this case.

What happens to potential jurors who know what the case is now – is it typical that if they’ve even heard about it that they are eliminated? Could they decide they want to “convict this man” and thus lie about what they know, how they feel, etc.? It was such an emotionally charged, nationally blanked-covered huge story. You would have to have been completely off-line in every way to not even hear about it……

I read the warning the judge gave them, so I get that; but this case was so over-the-top propagandized, and is so emotionally charged, given the anti-Zimmerman hate-fest and the ginned up the raaaacist accusations – and worse.

[…] just posted up the wrap-up for day one of jury selection in the Zimmerman case.  Some interesting, particularly how effective the misinformation campaign waged by the Martin […]

B30 could be dangerous. He is sharp, and has a sense of humor.

This could be the opinion-leader, if he’s empaneled.

What is the race of these prospective jurors? (Please don’t tell us that doesn’t matter because it does.)