Someone (a reader?) pointed me to a post at Small Dead Animals (a great blog, btw):

507 visits per day isn’t a lot for a blog, unless they’re from one particular entity:

The American Spectator is under the watchful eye of the Obama Administration. Since January 1, 2013, federal government has been on the spectator.org website 81,164 times, with the IRS, Department of Justice, and the Department of Homeland Security leading the way.

Btw, the above information isn’t from a post, but rather pops up on your screen (it may take five or ten seconds) when you visit the Spectator; click [X] to close the box. 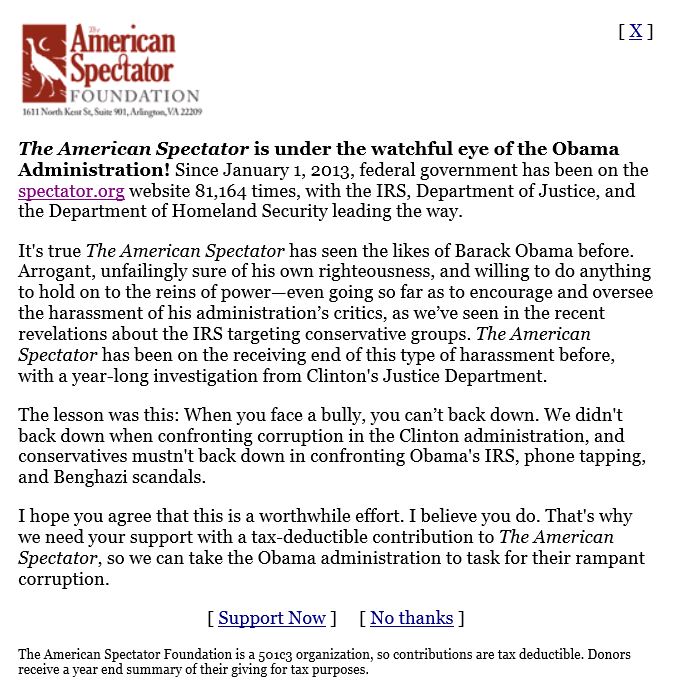 I wouldn’t be so worried.

At Legal Insurrection we get tons of traffic from federal, state and local government i.p., addresses.  I say that only anecdotally because I don’t spend much time worrying about or watching blog traffic, but on those rare occasions when I look, they’re there.

I also get many emails of support from government workers who are sympathetic.

I welcome readers from the government, regardless of whether they are reading, “watching,” just goofing off, or trying to look busy in order to avoid being furloughed.

If they’re reading Legal Insurrection and they don’t already agree, perhaps I can persuade them to come over to our side, or at least distract them from doing damage for the minutes they are here.

So workers of the federal, state and local governments, unite with Legal Insurrection.  You are welcome here.

Update 6-12-2013: One state government worker reached out to me this morning:

I saw your post last night about government workers. For me your site is a morning ritual as I have you in my favorites…. your site is as needed as my morning coffee! Thanks for all the work you do to keep us informed!

What an opportunity: they should direct advertising to them!

Perhaps LI could have its own confession box & save government surveillance people some time .

What’s there to worry about if you can detect IP addresses? It’s what is undetectable that I would worry about.

Hello, Government workers. While I have your attention–
Article IV, Section 4, The United States shall protect every state in the Union against Invasion ==> http://www.heritage.org/constitution/#!/articles/4/essays/128/guarantee-clause (h/t Michelle Malkin)
Please pass it on. Thanks

Oppose Barry Soetero?….. that puts you on his “enemies list”!

american citizens, any american entity…. oppose the Messaih, get put on his “enemies list”… he did call his opponents “enemies” in the past, didn’t he?

man oh man, I miss Bush! and I did not vote for him either time.

Trolling for our own gub’mint whistleblowers. Awesome.

Nothing wrong with that… I recently sent an email to one of my Senators (Democrat, so it’s not like there’s any chance my voice will be heard), and at the end added a parenthetical comment to the NSA asking them to do something about the telemarketers that keep calling me. 🙂

Wrong? You missed the word ‘awesome’?

Would be nice if it was “just” common workers who sympathize…but in light of recent events, I’m going to be more inclined to wonder if certain websites are on someone’s worklist.

This site’s banner has the perfect definition of it’s name – fits the the times we live in.

And yes DHS… I am one of those who believes in “a rising up against established authority in conformity with, or permitted by law”.