Where has all the IRS scandal news gone, long time passing

The most potent electoral issue of all is all but gone from the mainstream media.

It was the scandal du jour in Washington last month, now relegated to back-burner status after recent revelations of a vast government electronic surveillance apparatus created in the name of national security following the 9/11 terrorist attacks.

The announcement Thursday by the Obama administration that it would boost aid to Syria rebels because government forces there used chemical weapons further shifted attention away from the IRS controversy involving extra scrutiny given conservative groups seeking tax-exempt status.

Washington Times, What IRS scandal? Broadcast news covered it only ONCE this week

When news broke that the IRS had targeted conservative groups, the “Big  Three” broadcast networks were hot on the trail. NBC, CBS and ABC ran 96 stories  about the matter for the first two weeks – May 10 through 23, according to an  analysis released Thursday by the Media Research   Center. Thirty one more stories followed during the next week.

But this week? There was only one story, which aired Tuesday on ABC. 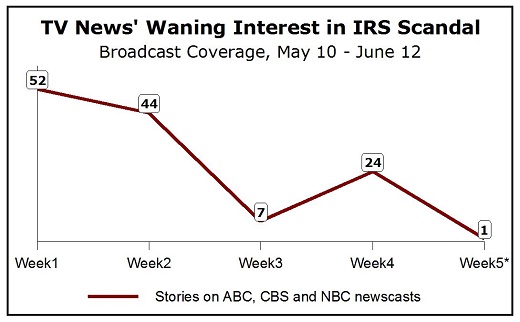 Well, it is the oldest trick in the book:
Misdirection.
All Magicians use it.
Keep the attention over here… the real action is over there.. and then there is a quarter coming out of someone’s ear.
It’s just too bad that the trick is being applied to something so grave. And it is more than bad that they think it is a game.
Scandalmania is going to be washed away by the Savior of Syria.
Great.

Scandal fatigue. Desensitization. Roll ’em out, one after another, and before you know it, everybody’s developed a “so what else is new” attitude.

Shows how much in the bag the media are for Obama. Or how afraid they are of giving their ever-more-meager budgets inoperable hernias by focusing on real, hard, worrisome news. What the heck ever happened to the IRS “raid” in California (if that is what is truly was – there are some alternative outlets which have expressed skepticism…)? The one in which “agents” supposedly took 60 million health records in violation of HIPAA, ordered take out, and watched part of the NCAA tournament on television? In the good old days, the mee-ja would have been all over this one like stink on politics.

Professor this post would be funny if it wasn’t so sad.

The IRS scandal is not going to go away, because they do not have the affection of the folks, under any circumstance. Obamacare, insurance premiums jumping, the thought of the IRS snooping on their health issues will be when reality will really hit.
$$$$$ + IRS.

Don’t watch the MSM. They’re not worth the bother.

If the govt hate media picked up on the IRS scandal story, it would only be because they were trying to distract attention from an even bigger scandal.

The govt media are corrupt. They are the bad guys. Why is that so hard to understand? They are not going to help conservatives fight their battles, nor should we want them to. At best they are irrelevant.

There is little to report right now.

The liberal media can not disappear these unlawful acts by the IRS and can not dissuade congress from investigating to the full extent of the evidence trail.

This is the most serious of situations and Liberals are holding the bag.

This is the main problem. There is little to report because the Republicans aren’t proposing to fix the problem. There was a little squeak from one of the Republicans about the power of the purse, but no follow-through. Congress likes to investigate, but there is little purpose in investigating if it’s not planning to do anything other than maybe watch a scapegoat or two get thrown under the bus.

The Daily Caller has an encouraging report that there’s more to come, and that the “investigations will last for months,” according to Congressional committee heads.

This should be framed as a conspiracy to tax free speech, much like a poll tax a la Jim Crow. That’s how one of the affected parties should have retorted to the moonbat Congressman who accused her of wanting to be subsidized by taxpayers. Americans have the right to pool their resources to make their voices heard, and for the IRS to tax the their pool is effectively to tax free speech.

So many scandals, so little free time to learn about ’em.

Can we just condense them all into a single third-rate mega-burglary scandal?

As predictable as night following day. It will be the same with the rest of the scandals as well.

We need a gang of 8 focused on each sandal-in the spiirit of bipartanship (& reelection).

Do you mean the bipartisanship where the Republicans do whatever Chuck Schumer suggests, which is good and right and to be desired or the type of bipartisanship where BOTH sides have to give and take, because that is evil and divisive and bad for the country….this I know because the Mainstream Media told me it was so.

The general public has gotten a glimpse of the man behind the curtain. The great and powerful Ozbama states in reverberating voice “I read it in the papers just like you”, and the faithful looked askance at each other, incredulous.

Then the faithful got a look at the several lies, they saw the curtain rent from top to bottom, and there was Professor Ozbama in a compromising position with a bunch of flying monkeys. Even devout sycophants gasped and some cried “He Lies”. “The emperor has no clothes” (to inject another fractured fairy tale).

The world has changed, and only Google can save the great Ozbama, by pumping all Democrat talking points to the top results of any search on scandals. It is claimed that tactic got the up to 15 points in the election. I believe it.

But a little war in Syria will also help. Obama waits till he can be sure to issue weapons to al Qaeda or the Muslim Brotherhood, after they have inserted themselves in the grass roots uprisings, as was done in Egypt and Libya. He sat by and let Iran’s Green revolutionaries get trounced, much like he watched Ambassador Stevens die.

As the halo slips, true motives become more questioned by the unwashed masses … I hope. These scandals will not go away, as I see it. Let the news cycles play out, and keep coming back to the unresolved scandals, like a battering ram against Obama’s stone wall.

There’s a rumor that Kanye has been sleeping around on pregnant Kim Kardashian!

Broadcast media has a short attention span when it comes to Obama’s constant dereliction of duty. They move from scandal to scandal at warp speed.