There was joy in liberal blogospheric Mudville when it was reported that terms like “progressive” also were used as a screening mechanism.

PROOF! The IRS Scandal was not a scandal! 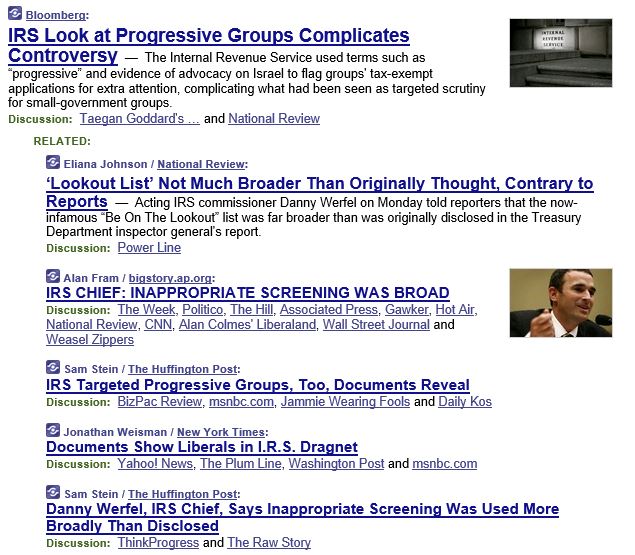 Russell George, Treasury’s inspector general for tax administration, told Rep. Sandy Levin (D-Mich.) in a letter dated Wednesday that the IRS did not use inappropriate criteria to scrutinize groups with “progressives” in their name seeking tax-exempt status.

“Our audit did not find evidence that the IRS used the ‘progressives’ identifier as selection criteria for potential political cases between May 2010 and May 2012,” George wrote in the letter obtained by The Hill.

“While we have multiple sources of information corroborating the use of Tea Party and other related criteria we described in our report, including employee interviews, e-mails and other documents, we found no indication in any of these other materials that ‘progressives’ was a term used to refer cases for scrutiny for political campaign intervention,” George wrote to Levin, the top Democrat on the tax-writing House Ways and Means Committee.

Still is. And…like Benghazi…we STILL have a lot of people to hear.

[…] Legal Insurrection, which has cruelly preserved a screen capture of the Left’s now-spoiled joy. […]

Boy howdy there’s a surprise. Careful with that feather, Prof. Jacobson, you almost knocked me over!

Which is the way Champ and his people want it for low-information voters, I think. Wonder if the rioters (who will come out after Zimmermann is acquitted, should he be acquitted) will know how bad the State’s case is?

[…] Legal Insurrection, which has cruelly preserved a screen capture of the Left’s now-spoiled joy. […]

Geeeez, tell me something that I don’t already know.

If the investigators, (House Committee), pursue this it will lead straight to the White House. The smell is so great that it falls into the stench category and that particular scent originates from Chicago, Illinois.

That’s my take and I’m stickin’ with it…

The fact that Obama’s shady half brother got waved right through with a retroactive approval is all the evidence that is needed. Investigation should stop right there and move to the prosecution phase.

I disagree. Stopping after going for the proverbial low-hanging fruit leaves another opportunity for the current occupier* of the White House and his friends in MiniTru… erm, the press, to bury the rest, making it even more difficult to fully document the depth of the problem.

* There is a subtle difference between “occupant” and “occupier”, in spite of the same root. Parisians are occupants of Paris, the Wehrmacht were occupiers.