Sometimes I feel like a Founding Fatherless child (Update: Fathered)

Sometimes I feel like a Founding Fatherless child (Update: Fathered)

We’ve focused on the language wars many times before.

But this time it’s different.

Because it’s not a dispute over how to characterize the same set of facts — such as “illegal immigrant” versus “undocumented immigrant” — but a complete denial of the fact which heretofore has been trumpeted by Democrats and liberals endlessly — the Founding Fathers were OLD WHITE MEN.

Via Charles Cooke at NRO:

The White House has today put up a link to a new government website that collates and offers key documents from the revolution and the founding era. But it appears that the administration couldn’t bring itself to say, “Founding Fathers” 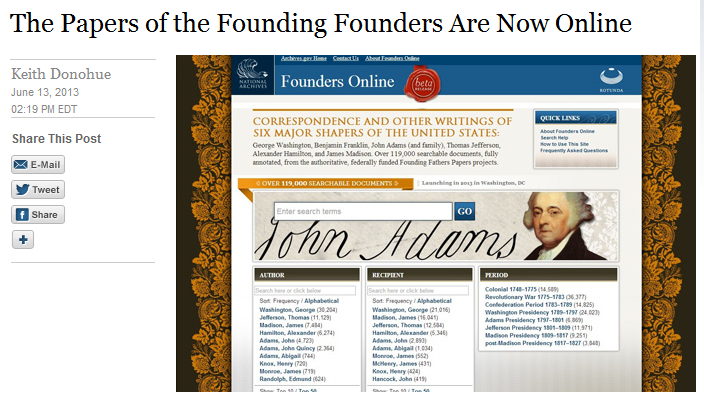 Update — Father is back: 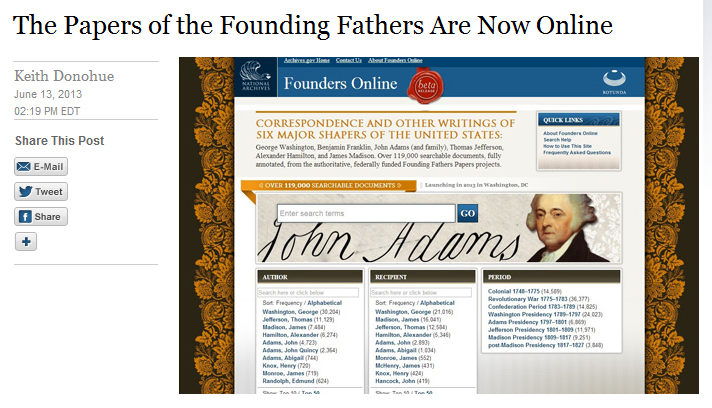 Founding “Fathers” only means one thing, but “Founders” now that is a word with fantastic potential!

Foun·der 1 (foun d r) v. foun·dered, foun·der·ing, foun·ders v.intr.
1. To sink below the surface of the water: The ship struck a reef and foundered. 2. To cave in; sink: The platform swayed and then foundered.
3. To fail utterly; collapse: a marriage that soon foundered.
4. To stumble, especially to stumble and go lame. Used of horses.
5. To become ill from overeating. Used of livestock.
6. To be afflicted with laminitis. Used of horses.

A foundling is a baby abandoned in a place where there is a good chance he / she will be found & taken in .

I just thought I would put that in .

With immigration reform being debated, I’m surprised the White House is willing to admit that the Founders had papers at all.

I thought this was a hoax when I first saw it, and had to check for myself.

All they had to use was “Founders” if they were so chary of using “Founding Fathers”.

When you live in an age of rampant homosexuality, lesbianism, and transsexualism, in which these sins are declared to produce people who are better than the average bear, in which heterosexuality is the cause of all ills, and in which heterosexual males are predators to be re-engineered into metrosexuals (aka closeted homosexuals and transsexuals), I guess it’s discriminatory to talk about “Fathers”.

I had no idea this Admin had put up any such website but in following the books and papers of this Admin’s vision of the future I keep stumbling across the idea that the US Constitution and our political structures just don’t fit with the new Digital Age of the computer.

I know the education policies are premised on this. Which means this is the future voters are to imagining because this Admin knows well that virtually every future voter is influenced to their core over an extended period of time by education. Especially K-12. http://www.invisibleserfscollar.com/weak-humanscomputersexpert-modelling-of-captured-data-is-this-your-approved-vision-of-the-21st/ is the explanation of why our current political structure just doesn’t work. The fact that the explanation is framed in terms of ICT and quantum physics really shows this was a policy in search of a rationale.

And honestly on that website, if it wasn’t ideological, Founders alone would have worked. But no they wanted to bring into context and create the idea that it was time to move on.

By showing an interest in the Founders you are assumed to be a Tea Party sympathizer. That makes you a political enemy of the Democrat Party. It’s set up so that when you click the link your internet ISP gets auto-forwarded to the IRS putting you next in line to be audited.

Well folks… Nothing is going to change until the pendulum swings the other way and I don’t see that as happening anytime soon.

While we were the norm then moved on to the questioning followed by the introduction of political correctness to what we find ourselves surrounded today, absurdity!

If only I could hibernate until a solution is arrived at…

Flounder’s Day would be more accurate. Not to be confused with a fat delta tau chi pledge from the 60’s.

A flounder is also a fish.

If the slavish minions had any shame they would dig a deep hole, crawl in, pull the dirt on top of themselves and not emerge until they were a gallon of premium.

When you elected an incompetent lunatic to the highest office in the world, you get chaos and lunacy.

What’s the surprise? It’s going to get as worse as we let it.

The biggest problem isn’t the psychos in the executive branch — or running the Senate — it’s the sellouts in the GOP.

Is this the administration of the founding f-up’s? History will be a harsh judge in my opinion.

“Here’s an idea. Let’s put up a page linking to everything we don’t agree with about the way this country was founded, written by the guys who founded it. Let’s see — what were they called, again…?”

The Founding Founders (teleprompter; bad search and replace of word “fathers”) also are “shapers”, or, you know, those persons who happened to be here, immediately after which Muslims were the first to recognize the United States, Muslims enriched the United States…

Nobody would know about these embarrassing WH web pages if it weren’t for dastardly blogging bloggers.