Turkey appears to be following through on its threats to take over more control of Twitter and Facebook postings, after protests heavily driven by social media have engulfed the country for weeks.  But the social media giants do not appear to be cooperating with demands to share more user data with Turkish authorities. 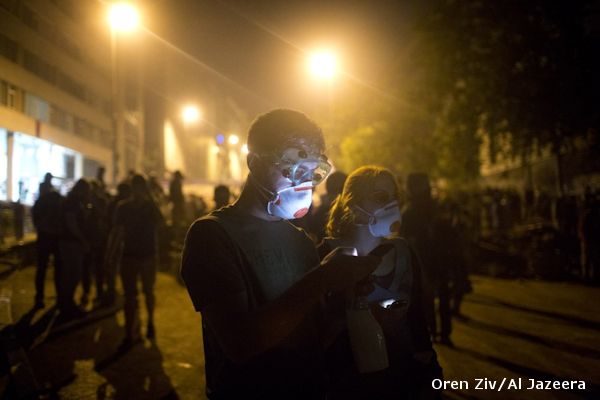 The state’s offer to cooperate with social media micro-blogging website Twitter over the Gezi Park protests has not been received positively by the company, Minister of Transport, Maritime Affairs and Communications Binali Yıldırım said today, Anadolu Agency has reported.

The same Hurriyet Daily News article also indicated that Facebook had “responded ‘positively’ and was currently is in cooperation with the state.”  However, Facebook has since posted a fact-check statement denying its cooperation with Turkish authorities and expressing concern about potential proposed legislation that might require the social media site to provide user information to those authorities more frequently.

Facebook has not provided user data to Turkish authorities in response to government requests relating to the protests. More generally, we reject all government data requests from Turkish authorities and push them to formal legal channels unless it appears that there is an immediate threat to life or a child, which has been the case in only a small fraction of the requests we have received. We are concerned about legislative proposals that might purport to require Internet companies to provide user information to Turkish law enforcement authorities more frequently. We will be meeting with representatives of the Turkish government when they visit Silicon Valley this week, and we intend to communicate our strong concerns about these proposals directly at that time.

Indeed, in response to social media’s role in the recent protests, Turkish authorities have been considering more creative ways to crack down on social media use.

Turkey’s Deputy Prime Minister Bekir Bozdag told reporters last week that “The opening of fake accounts by individuals will be prevented,” referring primarily to anonymous accounts protesters have used to shield themselves from retribution.  “Slander is a crime under law whether it comes from Twitter, Facebook, news websites, television or from the squares,” Bozdag said, according to Bloomberg News.

The country’s Transport Ministry also said it would consider using its commercial tax code to force compliance of data sharing, as was covered in a previous Legal Insurrection post.

“Twitter doesn’t have a legal basis in Turkey. They take ads but they do not pay tax in Turkey. It should establish a company compliant with the Turkish Commercial Code, like Facebook and YouTube,” the ministry officials told daily Hürriyet.

It appears the country is moving forward with its plan to try and require Twitter to establish a corporate presence in its country, which would give its government more control.

Transport and Communications Minister Binali Yildirim told reporters on Wednesday that without a corporate presence in the country, the Turkish government could not quickly reach Twitter officials with orders to take down content or with requests for user data.

“When information is requested, we want to see someone in Turkey who can provide this … there needs to be an interlocutor we can put our grievance to and who can correct an error if there is one,” he said.

“We have told all social media that … if you operate in Turkey you must comply with Turkish law,” Yildirim said.

An official at the ministry, who asked not to be named, said the government had asked Twitter to reveal the identities of users who posted messages deemed insulting to the government or prime minister, or that flouted people’s personal rights.

While Twitter hasn’t responded to those statements, it is unlikely that the company will cooperate with much ease. It fought a drawn-out court battle in 2012 in an attempt to avoid releasing the tweets of an Occupy Wall Street protester, until a judge ordered the company to comply with a court order or face contempt and a substantial fine.

Turkey banned YouTube in 2008 for two years after users posted videos that the government deemed insulting to its first president and founder, Mustafa Kemal Ataturk.  After years of pressure from the country, YouTube – which is owned by Google – finally launched a version of its video-sharing site that operates in Turkey.

“This is an important development. For a long time we have made a call to Internet firms in Turkey: ‘You are operating in this country, you must be resident here’,” Transport and Communications Minister Binali Yildirim said.

“Finally, this sharing site (YouTube) has decided to reside in Turkey. It is now operating under ‘com.tr’,” he told reporters, referring to Turkey’s Internet domain initials.

“It will now be in a binding and critical position to implement court decisions and remove any objectionable publications,” Yildirim said. “Further more it will also pay taxes on its operations.”

If Turkey’s battle with Google is any indicator, Twitter and Facebook – and social media users in Turkey – may be in for a long fight.

If they really wanted to know they can ask NSA or some of the multiple NATO agencies..they only have to say it is Defense.

[…] Gezi Park has been closed to the public since police first took control in pushing out the protesters on June 15th.  The conflict began when a small group of environmental activists demonstrated there against Erdogan’s plans to bulldoze the site and replace it with a mall, a mosque, and other proposed buildings.  But the aggressive response from police forces, which used water cannons and tear gas against demonstrators, fueled larger protests that eventually spread across the country.  Turkey’s government responded with increasingly hostile actions, including mass arrests of protesters and a crackdown on social media. […]