We stand with the Turkish protesters

But the protesters are expressing steadfast solidarity and refusing to buckle in the face of extreme force and Erdogan’s insults. As they band together and grow in number, they’ve adopted something of a catchphrase, which brings us to the term “çapuling,” alternatively spelled in many social media postings as the anglicized “capuling” or “chappuling.”

The Turkish word “çapul” has many meanings, including pillage; rage; plunder and booty to spoil; foray; root; and maraud, according to the Tureng online translation service. It’s unclear exactly where the term originated, but it might be a reference to Erdogan’s description of protesters as “looters.” The accompanying “Everyday I’m Çapuling!” video is likely designed to disarm the word by showing protesters engaged in non-looting activities that aim to counter his use of the loaded term….

However it got started, the term is taking off in a major way. Twitter users have spread the phrase via hashtags, including #çapuling, #capuling, #chappuling, #everydayimcapuling, #everydayimçapuling and more, and the video has gotten so many views in such a short time that it has triggered YouTube’s hit-count-stopping feature.

Turkish citizens crowd-funded an advertisement which ran in The NY Times: 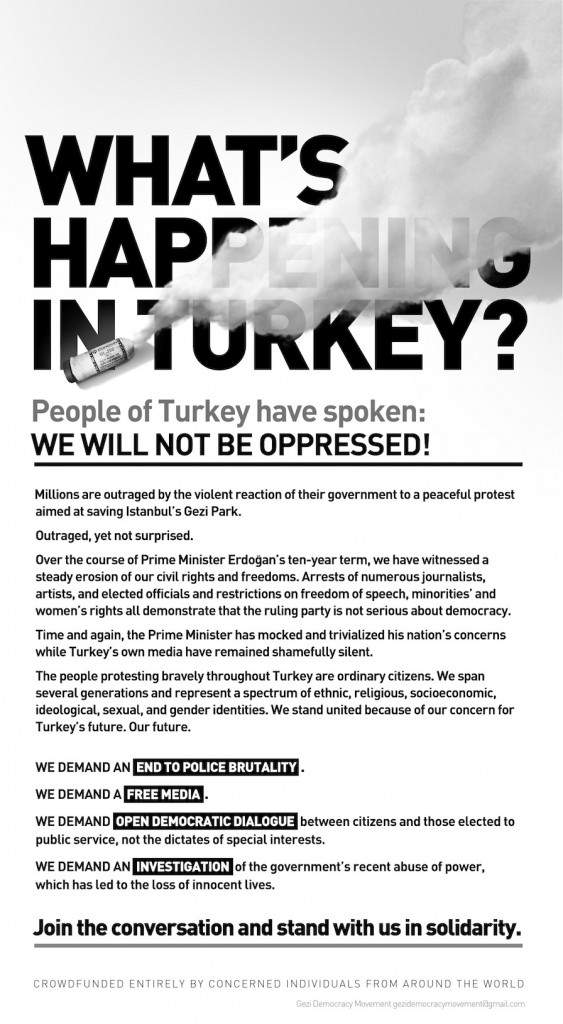 The protests continue tonight in Turkey against the abusive rule of Islamist Turkish Prime Minister Recep Tayyip Erdoğan, someone whose dangerous bluster is well-known to Legal Insurrection readers.

An another 10s of 1000s continue demonstrating in #izmir, Turkey's Aegean coast via @haktanpak pic.twitter.com/vzlwjEZnl2

God bless those Turkish protesters for they are standing for civil liberties! Good for them.

As I did say 55-years ago to my Turkish friend: “Merhaba Effendi, nasilsiniz?”

Sadly, the protests may not have come in time.

Turkey was always the modern “islamic” state, going back to Ataturk, who realized economic and social development was the key to wealth and power, that the medieval practices had to be put aside for nations and peoples to grow and progress with the rest of the civilized world.

Post-Ataturk, the commercial class and the military were the guardians of Turkish autonomy, their influence would be exercised whenever the government leaned too far towards either secular dictatorship or islamism. But the military has been decimated, its officer corps largely replaced by Erdogan’s islamist loyalists.

The middle class is now outvoted by the teeming masses of ignorant poor barbarians, and the independent press has been pruned back substantially. So the institutions and groups which might have saved Turkey from a descent into the hell of the islamic crescent are mere shadows of their former selves, rendered mostly impotent by Erdogan’s long campaign, which began as Mayor of Istanbul.

I pray that I am wrong, but I fear I am not.

Turkey is a NATO nation so they are your allies.

The difference between the Turkish government and the people will be the brute force that the government will and has used. The protesters will be crushed just like in Tehran and Cairo. Islam is on the rise and it will not accept any accommodation with Western values. I will pray for these poor souls and hope that they can prevail.

I recently learned that the Turkish word for “Squirrel” is “Penguin”.

…except for all his vision and will, Mufasta Kemal Attaturk didn’t include a Second Amendment in his western, secular state.

The Left STILL doesn’t get it. Or… do they?

What Ataturk did do was to secularize the cities and the military, especially the military as the guardians of the secular state.

But, even 55-years ago, the villages and rural areas were governed by tradition, women were covered there, not in the city, and rural areas were very xenophobic, Chai Houses and beer was plentiful. Plus if the civilian government varied from Ataturk’s guidelines, that “experiment” ended quickly.

Pity that those days seem long gone. Plus: the West decried Turkish Military rule when it tolerated that in Greece and Libya and elsewhere.

Turkey wasn’t stolen from the West, it was given away!

It’s shades of 1990 Bucharest where the students were vagabonds (golan) instead of today’s looters (capuling). The end game then was to send in a bunch of miners and allow them to run wild through the capital. You see the miners had been decimated in a previous rebellion and subsequently been heavily infested with security agents. Do not be shocked to find Erdogan calling for volunteers to defend the state from the demonstrators and for those calls to be answered by well organized convoys from the hinterlands. I’ve seen this movie before. Get ahead of the story so we might have a better ending.

This tactic of a repressive regime calling in thuggish crowd busters from the hinterlands is not new. Iran used it on the green revolution, and china on the Tienmen square people. An interesting sidelight is one of ataturks original plans to ensure that turkey would never be taken over by an elected, but extreme and repressive gov like this, was to give the military enough independence to topple it in a military coup. But far too many US administrations pressured the Turkish military not to use this remedy, and now it appears the military are so neutered that maybe they cant anymore.

My kids great grandfather was shot in the head by Turks at Gallipoli .

It is a badge of honour to have been shot at by The Ottomans AND Attaturk.

In 100 years nothing has changed. It is Turks being Turks.

But I am very certain there are many Armenians pretty happy to see Turkey burn. I once made.a pilgrimage to Armenia to view The Arals & hear the stories.

I’m for isolationism. But I’m also for helping our friends and allies when they ask for our help.

If Syria wants to devolve into a “whatever” we should let it. We should stand back and let it happen.

Israel (all Christians now) are God’s nexus with earth. He will be with His people in His Kingdom

Our gov’t should not send any money to Pakistan or Afghanistan.

We must secure our borders. No illegals whatsoever. We have an intrusive gov’t spying on us because it allows illegals to enter our country at will.

We must increase our border defenses and our star war defense.

Iran and N. Korea can threaten us all they want. We should be ready to defend ourselves against any nuclear threat.

We must make alliances that mean something and not the BS Obama-Putin macho-man détente.

We should not build a nation of cowards who flinch at any gun shot.

Sadly NATO wont press for review of the actions and threaten to remove Turkey.

The right (Tea Party) needs a video like that with a catchy tune. It stays with you.

Look at the list of grievances and this line from the ‘What Happening in Turkey’ NYTimes ad.

“Time and again, the Prime Minister has mocked and trivialized his nation’s concern, while Turkey’s own media has remain shamefully silent

An anti-Israel, pro-Wahabi Regime abetted by a pro-totalitarian apologists in the Media.

This is not the first time that a word originally taken to insult a movement has instead been adopted by that movement as a badge of honor. The Tea parties now have such contempt at being constantly and invalidly called racists, sexist, etc, that they will joke about their gathering of racists, sexist, plutocrats, and homophobes. A really famous example was when a British officer insulted the continental army by calling them yankee doodle dandies, and the continental army made it into a patriotic song.

Rednecks was a derogatory term coined by yankee liberals for southerners, but rednecks are a side effect of working in farm fields and southerners are proud to be called hard working productive men so it became an honorific.