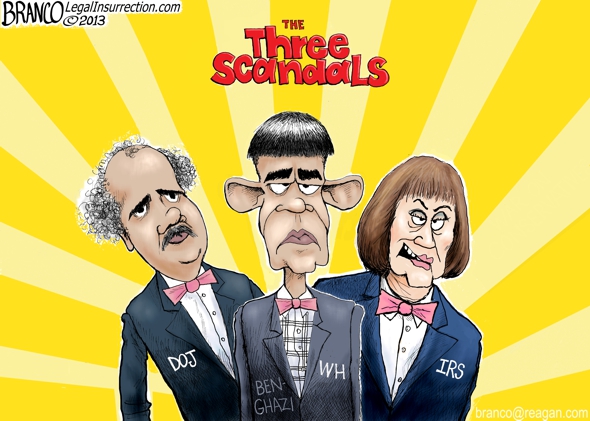 This cartoon is an overreach.

Thanks for repeating the liberal talking points.

From RedState: Operation Over Reach Around

On Friday, the Democratic National Committee released this memo claiming the Republicans had spent the month of May “overreaching” on the IRS investigation. By Monday morning, the Washington press corps rallied…

A long list of Obama lap dogs who used the word “overreach” follows, including The Washington Post, Politico, The Fix, and former White House Press Secretary Robert Gibbs…oh and LI poster myiq2xu, whose 2x IQ makes it 2x as easy for him/her to act like a parrot.

There’s an audio montage at the link, as well as a link to the Democrat talking points on “overreach”.

100% Picture Perfect Editorial Cartoon of who we have at the rot!

The Three Stooges actually beat this admin in every way, every day, all the way around!

They knew how to work – and how to tell the truth!

I misread and thought it said the “Three Scoundrels” and then thought that was too nice a description of them.

Send a poster sized ‘toon to the White House! It sure would be appropriate near the main entrance…

Make a poster and tape it to the WH fence.