The abuse of Jewish historical and religious sites ended:

“It felt like Messiah had come,” says Avigail Shlesinger, 81, of the day Jerusalem was liberated from the Jordan army 46 years ago.

Shlesinger, who is from a six-generation Jerusalem family, recalls what life was like in the Holy City during the time that the Jordanians were in control from 1948 to 1967. “It was a dangerous era,” she tells Tazpit News Agency. “There were areas in the city like King George Street where barriers had to be built to stop the bullets that Jordanian soldiers would shoot towards us.” …

During Jordanian rule, Jews were denied access to the Old City and Jewish holy sites such as the Western Wall and Temple Mount, while Christians were granted only limited access. The Jordanians expelled all the Jewish residents of the Jewish Quarter in the Old City and destroyed 58 synagogues and yeshivas. On the Mount of Olives, 38,000 Jewish tombstones were destroyed with some used to build fences and floor latrines as well as to pave roads for the Jordanian army.

Jordan’s illegal occupation of half of Jerusalem and the West Bank ended. There was no “Palestinian” capital in Jerusalem, that’s an invention of those who seek to destroy Israel.

People at #WesternWall in #Jerusalem are welcoming in Shabbat. #IDF soldiers liberated it 46 yrs ago. #ShabbatShalom pic.twitter.com/8KHZR1aNBD

You can hear the Israel Radio Broadcast here

More photos at IDF Blog (h/t Instapundit), including this one:

June 7, 1967: After a fierce battle, IDF soldiers liberated the Old City of Jerusalem. Soldiers rest against the imposing stones of the Western Wall. (Credit: BaMachaneh)

And the most famous photo: 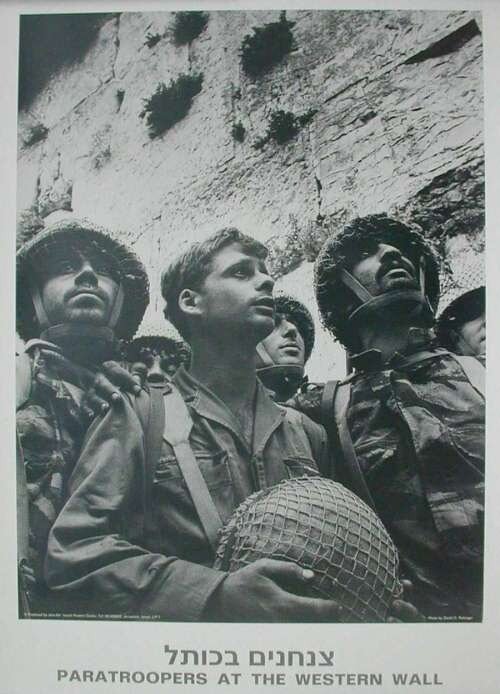 I’ll be in Israel in late July, when I hope to meet several of Legal Insurrection’s blog friends.

It’s been 30 years since I visited the Western Wall.  Too long.

This is a memorable photo of Netanyahu from that era.

I stand by Israel. Always have, always will.

Is this the Peaceful and Tolerant Islam that Obama keeps lecturing us about?

That last photograph of the paratroopers is amazing. Tonight must be a beautiful Shabbos. Mazel tov.

As I recall the daring, affable Motta Gur were leading the paras, no? He also instilled some of that spirit of elan into the Golani Brigade when he commanded there, helping transform that fighting force into what it still is today.

I think nowhere else is there a fighting force quite like the IDF.

A miraculous event. Too bad someone authorized the USS Liberty assault.