Stephen Hayes at The Weekly Standard documents how the CIA talking points on Benghazi were dumbed down just prior to Susan Rice’s now infamous appearance at the U.N. where she insisted Benghazi was just about a movie.

Removed from the talking points were references to al-Qaeda involvement and prior threat warnings, The Benghazi Talking Points:

Even as the White House strove last week to move beyond questions about the Benghazi attacks of Tuesday, September 11, 2012, fresh evidence emerged that senior Obama administration officials knowingly misled the country about what had happened in the days following the assaults. The Weekly Standard has obtained a timeline briefed by the Office of the Director of National Intelligence detailing the heavy substantive revisions made to the CIA’s talking points, just six weeks before the 2012 presidential election, and additional information about why the changes were made and by whom.

As intelligence officials pieced together the puzzle of events unfolding in Libya, they concluded even before the assaults had ended that al Qaeda-linked terrorists were involved. Senior administration officials, however, sought to obscure the emerging picture and downplay the significance of attacks that killed a U.S. ambassador and three other Americans. The frantic process that produced the changes to the talking points took place over a 24-hour period just one day before Susan Rice, U.S. ambassador to the United Nations, made her now-famous appearances on the Sunday television talk shows. The discussions involved senior officials from the State Department, the National Security Council, the CIA, the Office of the Director of National Intelligence, and the White House.

Here are the three versions, read the article for the explanation: 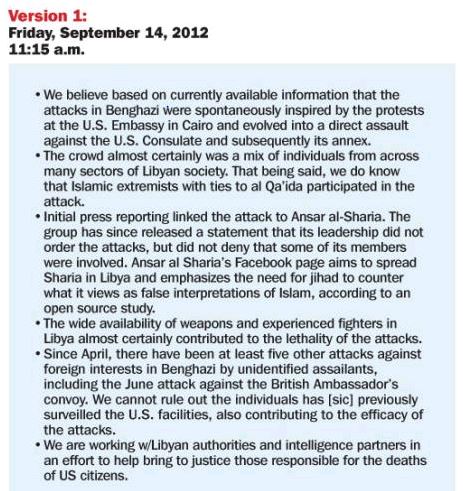 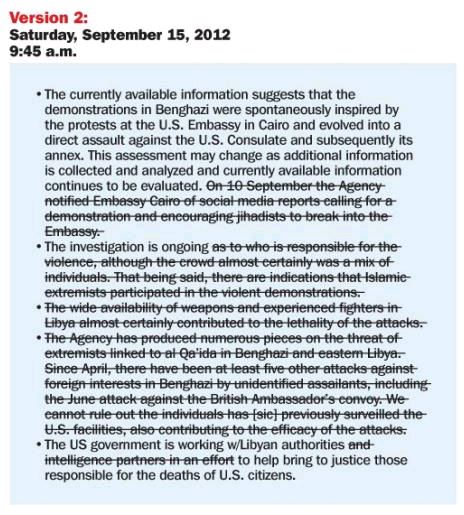 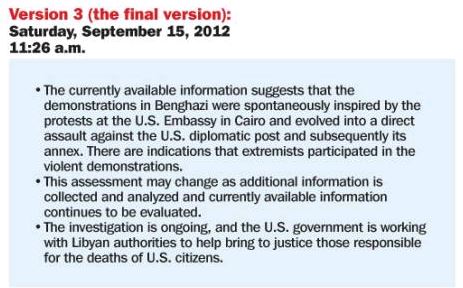 If you tell the truth, you don’t have to remember anything.

Roger L. Simon is a seriously smart guy, and no extremist bomb-thrower.

Benghazi is a series of scandals, evolving from a series of failures and the effort to hide from the consequences of those failures.

And let it be remembered, Pres. Sleeper and his Obami USED the denigration of the 1st Amendment in their campaign of lies, and quite adroitly and without the least apparent compunction.

When the very first sentence is a lie how can anything after that be taken seriously.

Only BO or an idiot (but i repeat myself) believes the benghazi attack wasn’t preplanned and not a ” spontaneously inspired” act.

I know of no evidence to show that Pres. Sleeper ever believed any such stupid thing.

Nor did anyone else, though they certainly promoted it.

Speaking of Benghazi….
News Item: Nancy Pelosi ‘Prays’ Hillary Clinton Runs For President: Most Qualified ‘In Modern History’
…Pelosi: “Dear Satan, this is your most faithful and loyal succubus, Nancy. Here is my current report of our efforts for Your Greatness: 1. Although I thank you for sending me barack hussein to help in my work, he has been of limited value. As you know he is lazier than Sloth, more self-absorbed than Pride, more thin-skinned than Wrath and far more avaricious than Greed – in fact he’s totally obsessed with getting money from your uber 1%-ers (we call then crony capitalists here on Earth). 2. To advance our goal for inflicting pain, suffering and death in America, I request your support to place your evil witch Hillary in a higher position of power – that of my next dictator/president. Just think of the harm this totally incompetent fool will inflict on America! Just think of all the deaths she will cause to Americans – like those in Benghazi! 3. Finally, let me note that your crowning achievement, OBOZOCARE, is beginning to cause all the damage you had hoped it would. This might turn out to be your crowing achievement, and I am so pleased that I could help create this horrific atrocity in your image. Love and kisses, Nancy.”

Notice that even the final version lacks any mention of the infamous “YouTube video” – did Rice add that on her own, or did someone else suggest she blame it at every turn?

Since it was NOT in the talking points at all, it had to come from somewhere, didn’t it?