Obama Tries to Change the Subject, but CODE PINK Steals His Show

Obama Tries to Change the Subject, but CODE PINK Steals His Show

President Obama stepped to the podium today to outline his policy on counter-terrorism in a long and rambling speech that focused on the use of drones and the Guantanamo facility.  The distraction of a CODE PINK protestor seemed to be more interesting than the speech itself.

The president’s speech was odd in its timing, after the administration conspicuously released Thursday the revelation that four Americans have been killed in drone strikes since 2009.  While Obama defended the use of drones in today’s speech, he also contrasted that defense, adding that he would work with Congress to further scrutinize the use of drone attacks.

And yet as our fight enters a new phase, America’s legitimate claim of self-defense cannot be the end of the discussion,” Obama said in his address. “To say a military tactic is legal, or even effective, is not to say it is wise or moral in every instance.

And only one day after the grisly slaying of a soldier in London that officials have said was likely an ideologically motivated terrorist attack, the President took extra care in stating that the US is not in a ‘boundless global war on terror.’

Beyond Afghanistan, we must define our effort not as a boundless ‘global war on terror’ – but rather as a series of persistent, targeted efforts to dismantle specific networks of violent extremists that threaten America.

In reviewing the speech in its entirety, it was a confusing series of statements that in large part seemed to contrast the realities of some of the administration’s actions to date.

But why the sudden speech on drones and Guantanamo to begin with?  Three words. 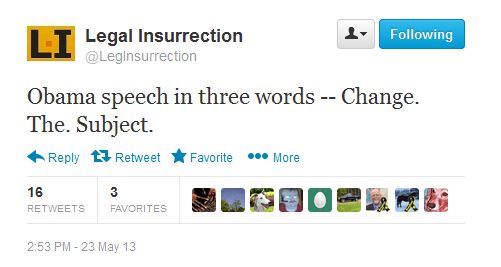 The current list of scandals has kept even the media focused on the issues coming out of the Obama administration of late.  The IRS targeting conservatives, the DoJ going after journalists for doing their jobs, and the ever changing narrative on the Benghazi talking points.

But the highlight of the president’s speech today actually came instead this time in the form of a well-known heckler.

Medea Benjamin of CODE PINK repeatedly interrupted the president, at times seemingly throwing him off.  Journalists who witnessed Benjamin standing in line to enter the event beforehand tweeted that they had recognized her, yet, as always, she was allowed in by security. 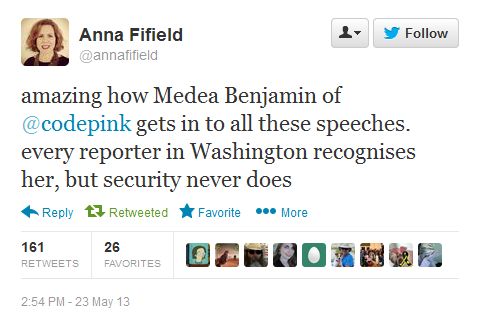 Before she was finally escorted out, Benjamin got in a few choice words for Obama on his counter-terrorism policies.

Can you tell the Muslim people their lives are as precious as our lives? Can you take the drones out of the hands of the CIA? Can you stop the signature snipes that are killing people on the basis of suspicious activity? Will you apologize to the thousands of Muslims that you have killed?  Will you compensate the innocent family victims? That will make us safer.

Benjamin’s points actually seemed to help further Obama’s narrative to some extent, rather than fully rebut it.

But if not for the CODE PINK appearance, I’m not sure that Obama’s speech would have been all that engaging to very many.

“Can you stop the signature snipes that are killing people on the basis of suspicious activity?”

Medea Benjamin is permitted to attend these events to garner added attention to another droning speech from the One. She was the insurance policy the speech would get coverage and thereby guarantee the subject is indeed changed. As an added benefit, the coverage of the protest permits the viewer to question perceptions Obama is really *that* far left. It’s theatre of the absurd for low info folks, nice try Obama.

If she was not working with the ADMIN the ADMIN would have her locked away in GITMO itself already!!!!!!!

Meanwhile, back at the ranch, AG Eric Holder, who said he’d recused himself from the AP subpoenas thing, actually signed off on them according to NBC:

I’ll at the very least give the Code Pink people credit for being consistent.

The Obot MSM not covering the Code Pink people( now that W is no longer in office)…. HYPOCRITES!

This mish mash labeled as a speech was blatantly thrown together to change the subject from Eric Holder signing off on the Risen search warrants which is the drip of bad news of the day. Holder recused himself telepathically right after approving it.

They’re just putting on a show to usurp momentum from the right. They’ll go right back to their old corrupt ways very soon.

In the meantime, what’s slipping by is that Obama is gunning for the Internet:
http://washingtonexaminer.com/obama-increase-in-domestic-terrorism-fueled-by-internet/article/2530391

WE need to be doing our own ‘Code Pink,’ and not being idiotic enough to let them steal the narrative.

Most Americans are working and providing for their families. They don’t have time for activism through symbolism. That requires a professional enterprise, which is preferably tax-exempt.

Obama also reminded us for the 8,752 time that Bin Laden is dead. Perhaps we should respond by reminding him, that was a long time ago and… what difference, at this point, does it make?

[…] First of all, Obama’s speech today was made for one reason as noted earlier at Legal Insurrection. […]

All the agencies have been misused by Obama to persecute and/or prosecute opponents and reward his fellow ideologue cronies, but the most chilling and sinister possibility is that Obamacare can be a means of silent genocide.

PC means Punitive Conformity and Population Control (in more ways than one.)

In addition to his obscene spending not being reined, Obama has written over 1000 Executive Orders giving himself unprecedented and unconstitutional powers – while the GOP and Libertarian wussies in Washington (with few exceptions) stand by in silent complicity.

It was an O’bammy attempt to change the narrative taking place in DC and all he did was repeat an attempt to REPEAT the failures of his recent past.

He’s bound and determined to close Gitmo regardless of national security implications. It was repetitious and tired and the public is growing tired.