Pretty much the only mention we made about the Massachusetts Senate special election to fill the seat vacated by John Kerry was a spotlight on February 12 about Gabriel Gomez, The Great Republican Hope (in Massachusetts)?

Gomez won the primary yesterday pretty handily, and will face off against Ed Markey, who has been a Congressman forever.  The NY Times sets up the contrast:

The Senate race offers voters a choice between Mr. Markey’s decades of experience in Washington — he was first elected to Congress in 1976 — and Mr. Gomez’s compelling life story. The son of Colombian immigrants, he became a Navy pilot and a member of the SEALs, attended Harvard Business School and is now a private equity investor.

Gomez is pretty liberal by Republican standards, and as we know, trying to out-liberal real-liberals is a losing strategy for Republicans in Massachusetts.  Better to set up a sharp contrast and hope for the best.

Gomez has a narrative and money for the campaign.  Markey has the same hack voters who pulled the lever for Elizabeth Warren.  Advantage Markey.

Markey has The Boston Globe on his side.  A Globe profile of Gomez predictably nitpicked every aspect of his biography, disputing even details as to the percentage of trainees who pass the Navy SEAL endurance tests; Gomez said 20%, The Globe corrected him by suggesting it was 25-30%.

That’s the level of scrutiny you get from The Globe when you are a Republican.  When you are a Democrat, The Globe has to be dragged kicking and screaming even to cover a major scandal involving false claims of Native American heritage used in an attempt to gain professional advantage.

The Globe ran this photo of Gomez — which would help Gomez in most places in the country, but not in Massachusetts, unless the Marathon bombings changed things: 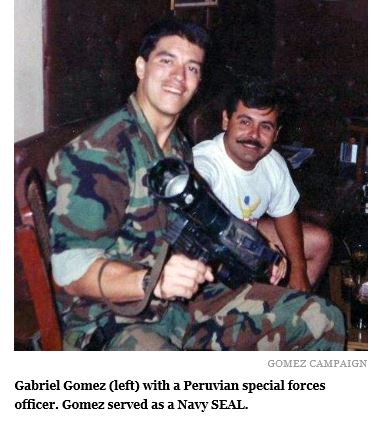 Just about every conservative pundit I have seen comment about the race on Twitter has written it off.

Will Legal Insurrection get involved in covering this race and researching Markey’s many known faults?

I don’t know.  We’re always long on ideas and short on time.

Gomez is awful in many ways….

1. His voice is weak and whiney. No stage presence. No compelling message. Seems to think being Hispanic and a Navy Seal are the only qualifications he needs.

2. Seems to have a charisma deficit. Like it or not, Markey seems like a U.S. Sen. — he has a certain bearing about him that is impressive (until you find out what he stadns for). Gomez seems like an opportunitist.

4. Gomez continues to support Obama, as he stated in his letter to Gov. Deval Patrick: “Two main issues that will dominate the political discussion during this appointment will be Immigration Reform and Gun Control. Given my Latino and Navy SEAL background, I have credibility to contribute thoughtfully on these issues. I support the positions that President Obama has taken on these issues and you can be assured I will keep my word and work on these issues as I have promised.”

6. Gomez is an Uber RINO. I need not hope he loses. I know he will lose. My only hope is that he returns to private life and is not heard from again as a candidate.

MA refused to re-elect Scott Brown. A JAG Corp Colonel with decades of military officer experience. Decades more experience in the state legislature. While in the U.S. Senate, he had a moderate voting record with a lifetime ACU score of 53. He was beaten by an ideologue with no legislative experience who may have been honestly mistaken about her supposed Cherokee heritage while advancing in her academic career, but who did not have the character or the good judgment to retract those assertions after it became completely obvious to all that her claims were false. But her ideology is pure. That’s all that matters in MA voters.

Gomez has real world elite SEAL training which means he could have been called on to die serving his country. And he has real world business experience, sorely needed in Washington. Markey is owned by far left special interests, especially the alternative energy scams. He has served his masters obediently for nearly 40 years in the House accumulating one of the most extreme ideological voting records in Congress, with a lifetime ACU score of 3.

Gomez does not stand a chance. He may break 40% if he’s lucky.

But her ideology is pure. That’s all that matters in MA voters.

Pork is what matters to MA voters. The downscale ones want to receive it. The upscale Warren types want to take a cut while they dispense it.

This implies that a MA Republican has a better shot at being governor than at going to Congress.

We elect Congresscritters to steal from the rest of the country, e.g. the Big Dig. When we try to steal from each other, we might find a referee useful.

Let Markey win, then find a conservative to run for his House seat. That way, we’ll at least have one new conservative in the Legislature

liberal Markey has held his seat for 36 years. You think a conservative can win his district???

you must not be from Boston.

Great choice MA – let’s nominate someone to the left of Scott “Kennedy Seat” Brown – that’s a winning strategy as the current Sen Brown can tell you.

In order to “out-liberal real-liberals” it would be necessary to predict the direction of shifting trends which follow the prevailing winds. Conservatives make bad weatherman. They are, by definition, better suited to be climatologists.