I’ve answered this question before

I’ve answered this question before

It’s not a trick question.

Here’s a fun one. Taken with my iPhone camera while stopped (I swear) on the expressway into Chicago one morning.

Best thing is: progressives don’t know and don’t care what comes after ‘trillion’. 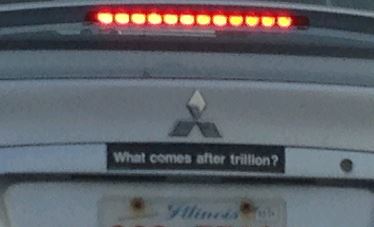 All I know is that it will come way after I’m gone so you’re gonna git stuck with the bill!!!

Remember when Obama, during a campaign speech, I believe, mentioned that these numbers are so big that you just can’t get your mind around them, comprehend them?

I think he really has NO IDEA what comes next! All he cares about is fulfilling Cloward-Piven.

(BTW-don’t go by the wikipedia page’s description – they would have you believe that Cloward-Piven, two self-avowed Socialist/Communist anti-Capitalist professors, were “angry about the welfare system” and were worried about “the poor”!! What a crock!)

What a great question to start the day with – and I know the answer!

Stone soup, fresh grilled rat kabobs with a side of dandelion salad.

I’ll have you know that dandelion salad is considered a delicacy in some quarters. As I recall, my father made dandelion wine on occasion. I’ll just say it was interesting.

I believe it is a “quatloo”.

And union teachers in Chicago now average $92,000 a year per nine months, with few performance standards. They will retire at 55 with around 75% of their final salary. A golden pension that gives health care and say $85,000/year cash makes all these leftist (often bad) teachers worth a few million, even if they never saved a dime.

A teacher I know says there is plenty of money out there, a common talking point from the left. Most public sector union folks have spent kindegarten through retirement hooked into the public money machine. Their only connection to private sector economy is via their mutual funds. And even those have been manipulated up by Greenspan/Bernanke engineering, which has bailed out billionaires.

The left has this idea we ALL serve the state, and that private wealth is theirs for the taking. They are clueless as to what makes a private economy function, knowing only that if they shut down their monopoly school system by strike, they get more money, regardless of the quality of their product. “Anti-trust laws for thee, but not for me.”

The self reliant capitalist model is being murdered, replaced with a government which can’t tax enough, so they print a trillion a year (QE, a stealth tax) and put everyone on a government program. Obama is a union leader, and only debt can keep feeding his “internal army”.

Here are a few numbers of interest as we head toward a quadrillion, just from Wikipedia:

The U.S. increased the ratio of public and private debt from 152% GDP in 1980 to peak at 296% GDP in 2008, before falling to 279% GDP by Q2 2011. The 2009-2011 decline was due to foreclosures and increased rates of household saving. There were significant declines in debt to GDP in each sector except the government, which ran large deficits to offset de-leveraging or debt reduction in other sectors.”

On the number line, it is quadrillion. On the economic line, it is a comprehensive devaluation of capital and labor. Following that, it is… Well, let history be your guide.

Daniel Greenfield @ Sultan Knish had a very interesting posting yesterday (IMO) dealing with the bankruptcy of America and immigration.

Q. What comes after trillion?