This just in tonight, an IRS source in the agency’s Cincinnati office says that Lois Lerner, one of the officials at the center of the IRS scandal, has been placed on administrative leave (with pay).

Lerner on Thursday afternoon sent an e-mail to employees in the exempt-organizations division she oversees stating, “Due to the events of recent days, I am on administrative leave starting today. An announcement will be made shortly informing you who will be acting while I am on administrative leave. I know all of you will continue to support EO’s mission during these difficult times.” She concluded, “I thank you for all your hard work and dedication,” adding, “The work you do is important.”

Lerner had refused to answer questions Wednesday in a House Oversight Committee hearing, instead delivering an opening statement to indicate that she had done nothing wrong and then invoking the fifth amendment.

The development also comes on the heels of a report from FOX19, a local affiliate in the Cincinnati area, that examined the chain of command in that office.  The report found that of the ‘rogue’ agents said to be responsible for the targeting of conservative groups, each had different managers, and the only connecting chain of command transitions back to Washington, DC.  It also suggests that the IRS employees previously interviewed were questioned as part of an audit rather than an investigation, the latter of which asserts more scrutiny, and that the employees may need to be questioned again – this time under oath.

One of the conservative groups targeted by the IRS has filed the first lawsuit against the agency.  True the Vote, which has been the subject of ongoing harassment by the IRS and other government agencies, filed the suit in federal court in Washington DC on Tuesday, alleging “unlawful actions by the IRS in the processing of its application for exempt status.” 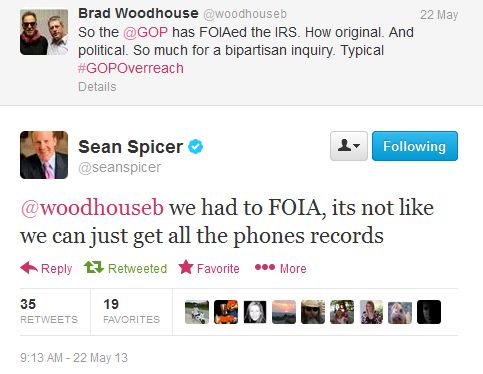 It seems as though the DNC Communications Director may have lost sight of why the FOIA law exists in the first place – to get answers from government agencies when that information is not otherwise immediately accessible.  There’s nothing partisan or overreaching about that.  As I noted in one of my own Twitter posts, I don’t believe the GOP are the only ones filing FOIA requests to obtain answers from the IRS.

Let’s not forget that there are many everyday citizens who were the targets of overreach by the IRS.  And those citizens want answers.

Update by WAJ: Looks like Lerner has some splainin’ to do, via Andrew Stiles, Lois Lerner Directly Involved in IRS Targeting, Letters Show:

A series of letters suggests that senior IRS official Lois Lerner was directly involved in the agency’s targeting of conservative groups as recently as April 2012, more than nine months after she first learned of the activity.

Lerner, the director of the IRS exempt organizations office in Washington, D.C., signed cover letters to 15 conservative organizations currently represented by the American Center for Law and Justice (ACLJ) between in March and April of 2012. The letters, such as this one sent to the Ohio Liberty Council on March 16, 2012, informed the groups applying for tax-exempt status that the IRS was “unable to make a final determination on your exempt status without additional information,” and included a list of detailed questions of the kind that a Treasury inspector general’s audit found to be inappropriate. Some of the groups to which Lerner sent letters are still awaiting approval.

Lerner has denied involvement in the targeting, which she has blamed on a few “front-line people” in the agency’s Cincinnati field office.

A tad under 50 percent of the US populace doesn’t pay income tax and could care less about the IRS. That number is going to increase.

That alarming number is why Obama needs a month of early voting for his federally funded unions to drive their voters to the polls.

I read this on Twitter:
Jake Tapper ‏@jaketapper
Grassley says his “understanding” is new acting IRS commish asked for Lerner resignation +she refused.

If it’s true, that Lerner’s resignation was asked for and she actually refused, I need an understanding of just HOW she was allowed to refuse! Is there some law? Plain audacity? I was fired once and had I refused, my arse would have been kicked out the door!

Worse, if she is allowed to be on leave, that means we taxpayers can keep her paychecks rolling. Ugh.

If she refused to resign, then standard practice would be to put that person on administrative leave until they can be fired. The purpose is to get them out of the office ASAP. The process of firing someone in government may be time consuming so she probably has many paydays ahead.

The process of firing a gov’t employee is monetarily and time wise expensive! There has to be lots of documentation blah blah
essentially take the corporate HR firing process and multiply it by 5

Federal Civil Service = Union . She had the power to do as she pleased .

To all the dems who read this blog, thanks for showing how much of power hungry hypocrites you people are!

–wrong is wrong, and apparently you dems are fine with using govt force and power to go after people you don’t agree with. Try and pretend how you would have reacted had Bush done this crap!

Thank you dems for showing your TRUE colors!

Why do public workers receive greater benefits than the general population?

They should offer administrative leave to all citizens, irrespective of their public or private employment. It should be a civil right. In fact, it could be a new class of employment or welfare.

in the private sector, you break the law or screw up, YOU ARE FIRED!

Why is it federal employees when they break the law or screw up, get a paid ( by taxpayers!) vacation????

The same reason that teachers can molest children and be put on administrative leave: Unions. The only real way to get fired would be to piss off the union boss.

Charles Grassley says the new acting director of the IRS requested her resignation and she refused so they put her on administrative leave.

At least now we’re paying her to do nothing instead of paying her to screw us over so I’m trying to look at this as a good thing.

Note to self: Read ALL the comments before posting. Cuts down on unnecessary duplications like the one you just posted.

What is Issa’s game plan, does he even have one? While I believe that Issa is an honorable man, the way he conducted his committee’s hearing this week on the IRS has been slightly less than stellar.

Issa is letting Lerner get away with dissembling and obscuring the truth while posing as a person with some credibility, which IMHO she does not have. Rep Gowdy, IMHAO, laid it out perfectly for the committee when he proclaimed that Lerner had waived her 5th Amendment rights with her opening statement and her affirmation that her previous written statement was hers in fact.

Next audit – exert my fifth amendment

When they respond with their dribble about jail time, I will tell them not
Save their breath, I will surrender myself to administrative leave.

And to follow their other lead… I will let them know I recused myself every April 15th.

Did she commit a violation of IRS 1203? And is every level of management between her and the Cincinnati Rogues likewise situated? Special prosecutor …please…