Some great opening statements. Will embed videos when available.

The moment when she invokes 5th Amendment: 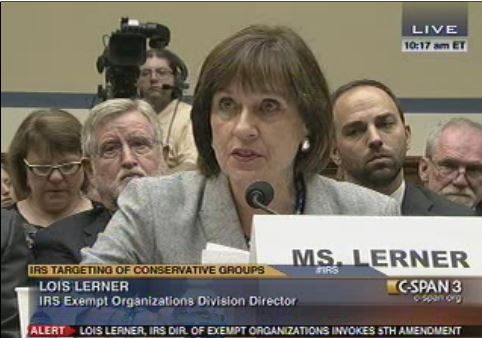 After she gave an opening statement and defended herself, Lerner refused to testify and was dismissed from the hearing: 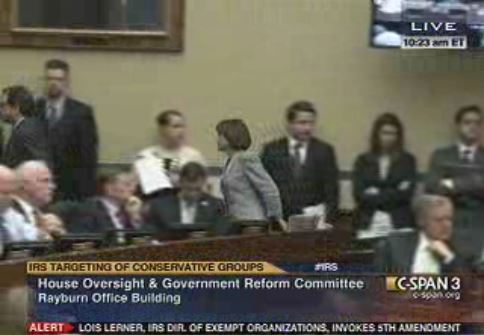 And they want the #IRS to enforce #Obamacare? twitpic.com/csfo8t

Rep Stephen Lynch suggests special counsel may be necessary re #IRS scandal, if witnesses continue to stonewall. “There will be hell to pay”

“You don’t get to tell your side of the story” and then refuse to answer questions. -Rep Gowdy (R-SC), a former prosecutor

MT @katiepavlich “We conducted an audit of the IRS, not an investigation” -IG George — very important — NEVER has been investigation #IRS

Schulman: “I have no memory of having knowledge of what was on the list.” #IRS

“It is possible that criminal may have occurred, but it is too early” at this point to determine that. -George #IRShearing

I don’t get Issa-

I figured the whole point of him asking her to identify that document was to get her to answer, thus waiving her 5th.

Then he lets her off the hook.

It should be contempt of Congress!

Issa’s been in the news for years with his investigations. Interestingly enough, he only goes so far and no further. He never seems to go for the jugular. So, what he did with this woman is par for the course. Maybe one day he will get serious about his investigations and take them to their full conclusion.

They should not have dismissed her. They should have kept on asking her questions just to have her on record, endlessly, refusing to answer and pleading the Fifth.

I’m glad that they at least asked her if she should be willing to comment on the statements she had previously given to the IG. The fact that she refused to discuss those comments alone should draw serious doubt on anything she had told the IG during their audit.

What are the steps – and who – gets to require and appoint a special prosecutor?

[…] III: Lois Lerner asserted her Fifth Amendment constitutional rights against self incrimination today. However, Lerner also asserted her innocence as well as […]

I don’t have a great understanding of legal matters, but I did not think that “taking the fifth” allowed a generic refusal to answer any questions at all. I was expecting her to have to make that claim for each question asked if it might implicate her.

Gotta hand to her and her IRS buddies. In the face of obvious disregard of the rules, she maintains she did nothing wrong.

These were disregarded, but she says she did nothing wrong.

That’s her “I am NOT a CROOK” moment.

She says she’s “Just had a Fifth!”

In my honest opinion…..
…..
when a Bumbling, Bureaucrat of Government takes the fifth,
it is an admission of guilt!

….but that is just my opinion, and the opinion of millions and millions of American Patriots!!!!!!

We need a law that says anytime a federal government employee refuses to answer questions related to their job performance in any court proceeding or congressional hearing related to the employing federal agency’s functioning, that employee’s federal employment will be immediately and permanently terminated, unless the employee had just cause for refusing to testify. (And just cause would be narrowly defined to include only such things as protecting national security interests).

It is outrageous that we are paying these peoples’ salaries so that they can flagrantly break our laws and trample on our freedoms, and then either lie about it to our faces or refuse to answer questions about what they’ve done, or both.

Plus they should lose 100% of all their government retirement benefits!

RE: “We need a law that says anytime a federal government employee refuses to answer questions related to their job performance in any court proceeding or congressional hearing related to the employing federal agency’s functioning, that employee’s federal employment will be immediately and permanently terminated, unless the employee had just cause for refusing to testify.”

Why the heck didn’t Darrell Issa make that despicable liberal lap-dog Lois Lerner stay in the hot seat and make her ‘Plead the 5th’ to each and every, single, solitary question he had for her until he was done? She may have actually answered one or more of his questions as the 5th Amendment is not tantamount to a ‘Miranda invocation’ and is not required to be recognized as an all encompassing ‘package deal’. It is only required to be recognized on a per question basis and it is entirely invoked as such by the person being questioned.

Issa just sent her on her way like he owed her a favor.

Maybe he gets his back scratched later — or perhaps it’s already been well scratched.

Unbelievable disgrace and a heaping helping of disrespect is all that the VICTIMS of the IRS are ever going to get in the way of so-called ‘Justice’ in these so-called United States of America with this current gaggle of Obama beholden sycophants and RINO lickspittles infesting our GOP/RNC.

She should have been hammered with questions for at least a half hour. Instead she got to make her statement for the cameras and then just walk away. You know what will be on the news tonight? Video of her saying she’s innocent. And that’s all! No video of her being asked pointed questions and then repeatedly telling the hearing to go pound sand.

You know what will be on the news tonight? Video of her saying she’s innocent.

That’s how the game works.

Pre-determined questions/answers, then that sound byte is used by the “news” organizations to expound a narrative:

Nightly News: Is the IRS under staffed?

The import of this event is trashed by the establishment GOP. Issa is just like Boehner and the rest. They’re playing us for fools. It’s a waste of time to cover anything Issa does. The GOP only exists to protect democrats.

Is it just me or does no one see the evil irony in how the Tea Party must endure all this criminal abuse for simply promoting our civilization’s Constitutional Rights…just so that Lerner and her tyrant goons in the WH can have the freedom and luxury of pleading the 5TH?!!.

The GOP National Congressional Committee called me yesterday for a handout. Boy, did I have fun with that caller!! Boehner’s ears should still be ringing. 🙂

If she said that under oath and she is later found to have lied, she could be charged with perjury.

“Rep. Trey Gowdy (R-SC) demanded that Lerner be made to testify, arguing that she had waived her Fifth Amendment rights by telling her side of the story. In a courtroom, he said, she would have been regarded as having waived her rights–and, he pointed out, Ranking Member Rep. Elijah Cummings (D-MD) had said he wished to conduct the hearings like court proceedings. The hearing room broke out in applause.”

I’d like to hear Prof. Jacobson’s take on this. Is Gowdy correct?

I think that any state employee should never have the right to invoke the 5th in regards to their job. Forget the firing part, they simply should have no right to invoke it in the first place.

Is Trey Gowdy the only one who can think on his feet? Obviously ISSA CANT.

Nice to see there is one Constitutional Amendment the Obama Administration likes!