From The Daily Beast, Hillary’s Benghazi ‘Scapegoat’ Speaks Out:

Following the attack in Benghazi, senior State Department officials close to Hillary Clinton ordered the removal of a mid-level official who had no role in security decisions and has never been told the charges against him. He is now accusing Clinton’s team of scapegoating him for the failures that led to the death of four Americans last year.

Raymond Maxwell was placed on forced “administrative leave” after the State Department’s own internal investigation, conducted by an Administrative Review Board (ARB) led by former State Department official Tom Pickering. Five months after he was told to clean out his desk and leave the building, Maxwell remains in professional and legal limbo, having been associated publicly with the death of Ambassador Chris Stevens and three other American for reasons that remain unclear.

Maxwell, who served as deputy assistant secretary of state for Near Eastern Affairs from August 2011 until his removal last December, following tours in Iraq and Syria, spoke publicly for the first time in an exclusive interview with The Daily Beast.

Only one of these people is laughing: 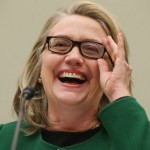 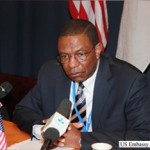 Easy for you to laugh

And only one is really guilty of anything…

or PRIMARILY guilty of anything.

A month earlier, he requested that the State Department extend his tour of duty personnel, which is a 16-man temporary security team trained in combating terrorism. The request was denied and the security team left 8 August.

Stevens had asked for the security team to stay through mid-September.

Colonel Andrew Wood, the leader of the security team that left Libya in the weeks before the terror attack, told CBS News that Stevens fought hard against losing the team.

‘It was quite a degree of frustration on their part,’ he said. ‘They were — I guess you could say — clenched-fist over the whole issue.
http://www.dailymail.co.uk/news/article-2220153/Christopher-Stevens-Ambassador-pleaded-extra-security-Libya-hours-killed.html

I spent 100s of hours campaigning for Hillary “what difference does it make” Clinton in 2008.

Not a chance in hell will I ever support her for anything again.

And if she runs again in 2016, I will campaign even harder to make sure she is defeated!

Since Maxwell is black will the NAACP and compliant media scream racism. This is a rhetorical question, the answer is no.

Anybody who somehow gets on the wrong side of Barack Hussein is officially Not Really Black.

‘Recounting the conversation later to a friend, Teddy fumed that Clinton had said, ‘A few years ago, this guy would have been getting us coffee.’

Damn, my mistake, he said that about Barry, not this poor ‘take one for the team’ schlub.

Finally, the WH has found THE person responsible for the death of a US Ambassador. Case solved.

Having watched so many testify before Congress, is it not obvious the most dangerous people in government are those rascally middle managers? After all, so many at the top never knew anything going on…. Just more evidence how devious those middle managers are – they are able
To mastermind so much nefarious activities and keep everyone above them in the dark.

Damn they’re good!! We don’t stand a chance against their incredible skills. May I suggest we take steps to protect ourselves and just eliminate all middle
Management here And now? And if that’s not enough, please let memknow what other inalienable rights I should give up for the good of the State.

One thing is clear, those at the top will always find someone in the middle or lower ranks to throw under the bus. Add a few lies, distortions and never accept responsibility for anything close out the options for avoiding any consequences.

Sounds like a plan and we get the debris…

The obvious thing would be to have Mr. Maxwell testify before one of the committees in the House investigating this affair. We should find out what if anything he knows. Also, perhaps the State Department might want to confidentially share why this man was targeted.

We deserve the truth where ever it leads and whoever is responsible. A

This disgusting, fraud of a woman is done.

As long as Hillary remains a viable candidate for POTUS, nothing else matters. Don’t you all see that? So what if some poor dumb schmuck loses his reputation and career? That’s the price he’s got to pay so Hillary can replace Barack and continue the great Socialist Dream. We must have Hillary. She’s more important than some simple paper pusher.

Interesting that they should find the one guy who was going to retire last September but stayed on to help in the aftermath.

Then there was the one guy at the IRS–a temp as it turns out–who was due to leave in June who was “forced” to step down early.